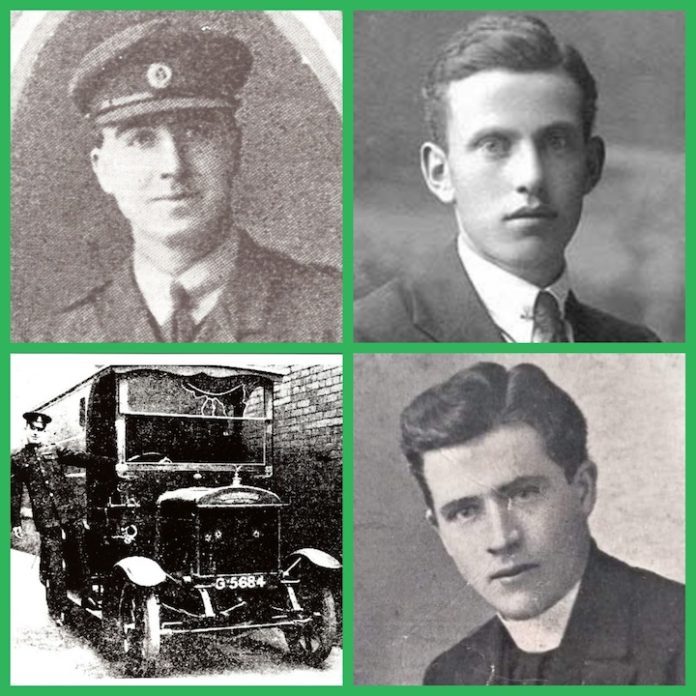 OF ALL the operations carried out by the Scottish Brigade of the Irish Republican Army, the most daring was the dramatic attempt to rescue their comrade Brigadier Frank Carty of the Sligo Brigade, from a prison van as he was being conveyed to Duke Street Prison in Glasgow on May 4, 1921.

The Man in the Van
Frank Carty from Ballymote, County Sligo, was respected throughout the Republican movement for his daring escapes from Sligo and Derry Jails. Following his escape from Derry Jail, he arrived in a coal boat to Glasgow via Workington towards the end of February 1921 and adopted the alias, Frank Somers.

Due to Carty’s poor health caused by pleurisy and a gunshot wound, he spent some six weeks recuperating under the care of Dr Cush in Glasgow. On April 29, Carty was arrested in the Gorbals district of the city. He had intended to leave for Dublin on May 2.

Rescue Plans
Following Carty’s arrest, plans were immediately put in place to rescue him. These were led by IRA GHQ (General Headquarters, Dublin) representatives Daniel Walshe, Daniel Branniff and Scottish Brigade Officer Commanding, John Carney. Commandant James Fullerton was selected to lead the operation. The Scottish Brigade decided to ambush the prison van that was transporting Carty from the Central Police Court, when it reached the brow of the historic Bell o’ the Brae, at 12 noon.

Carty was handcuffed in a small cell on the front of the van. The police escort consisted of the driver and three armed detectives. The IRA incorrectly believed that one of the guards on board would have a key. However, the vehicle was locked at the Central Police Court and could not be opened until it reached the prison.

The attack unfolds
Edward Walsh says that when he saw the prison van coming up High Street he signalled by raising his cap. While the prison van was travelling up the hill it was forced to change gear and the attacking party stepped into the path of the vehicle forcing it to stop. Eamonn Mooney, who was in command of a section of the attacking party, states that the van was very ‘different from any I had ever seen. There were no handles on the back of the door. I could not get a hold of anything. The front portion was steel plated with a glass windscreen.’

Seán Flood’s account of what happened next proves the most effusive: “One of the attackers jumped on board the van and in an endeavour to blow off the lock emptied his revolver into it, but alas the lock held fast. Crowbars and pickaxes were now brought into play in a last desperate effort to smash the van.” The attacking party, having failed to break open the lock, were forced to retreat after a few minutes. In the melee, Inspector Robert Johnston was shot dead and Detective Sergeant George Stirton was wounded.

Aftermath
Following the unsuccessful ambush, there was a wave of arrests with up to 100 individuals rounded up, including Father Patrick MacRory, a popular young curate at St Mary’s, Abercromby Street, Calton. Thirteen people were sent for trial in the High Court of Justiciary in Edinburgh. The press remarked ‘this was the first trial in which a capital charge was involved, in which there have been ladies in the jury.’ The trial ended in August with the acquittal of the accused. Carty meanwhile was returned to Ireland, court-martialed and sentenced. In June 1921, he was elected a member of Dáil Éireann for the Sligo and East Mayo constituency. He was released from Mountjoy Prison, Dublin on August 8, 1921 to attend a meeting of the Dáil.

Any assessment of the rescue attempt would have to concede that it was a failure. Not only was Brigadier Carty not rescued, but he also suffered a beating by the police in retaliation for the tragic and unintentional death of their comrade Inspector Johnston. It was officially stated that May 4 was the first time for many years in which any police official accompanying a prison van had been furnished with firearms.

Police inquiries revealed the extent of the IRA’s operations. As the Daily Record put it: “It was not until an afternoon in the month of May 1921, that the people of Scotland were brought to realise the immenseness, and the thoroughness of the Irish Republican Movement in Scotland.” A notebook found in a Glasgow tenement disclosed a list of firearms and explosives collected from a widespread area and the largest ever IRA arms dump was discovered on the very day of the ambush in the Calton. Other arrests had been made from time to time, but the repeated injunctions from headquarters for caution in the securing and transport of arms, were for the most part effective in keeping the IRA clear of the authorities.

In an atmosphere of urgency, given that Carty was under sentence of death, together with the need for on-the-spot decisions, individual initiative, organisation and leadership, there may have been an element of confusion. According to Seán Flood: “Carty’s record had endeared him to all his fellow soldiers of the IRA and those on the spot decided to make an effort to effect his release.” Commandant D.P. Walshe was probably right when he stated that to call off the Glasgow plan ‘would shatter the whole Republican movement here.’ When asked by the Advisory Committee as part of his military service pension application if the rescue attempt was worth it, Eamonn Mooney answered ‘the glory and honour of it was.’

The IRA volunteers who took part in the rescue bid cannot be blamed for the failure of Glasgow plan. They showed intelligence, maturity and courage despite their youth. Their community regarded them as heroes, as was shown by the huge ‘welcome home’ functions organised on their behalf. The fact that the friends and families of the arrested men were willing to perjure themselves in a Scottish court showed that they had an immense loyalty to Ireland and her government in her hour of need. Michael O’Carroll summed up his opinion of the Glasgow Irish when he said: “The people of Glasgow and the west of Scotland —the first, second and third generations of the Irish —I will always remember them, their loyalty, their sincerity and the ideals which were in their minds. They were wonderful.”

Stephen Coyle is author of High Noon on High Street: The story of a daring ambush by the IRA in Glasgow in 1921 (Clydeside Press, 2008). His next book Scotland and the Irish Revolution will be published by Kilmainham Tales in November