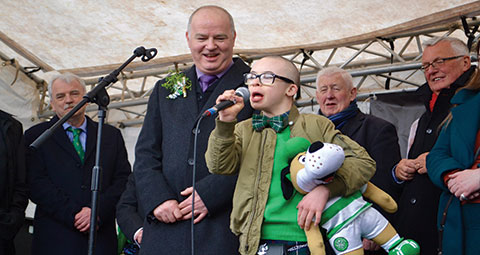 COATBRIDGE, Glasgow and Edinburgh were once again at the forefront of this year’s St Patrick’s Day celebrations, with each holding fantastic festivals, which were culturally and historically rich and captivated the imagination of the Irish community in Scotland—in fact as The Irish Voice went to press, Edinburgh’s Festival of Ireland was still in full swing!

Prior to the festivities getting underway, it was announced that Falkirk’s iconic Kelpie statues were to be lit up green for Tourism Ireland’s global campaign, which sees some of the world’s most famous sites going green to mark St Patrick’s Day.

Lord Provost Sadie Docherty once again held a civic reception to launch this Glasgow St Patrick’s Festival, which was notable for the fact that this will be the last time she will do so as Lord Provost. She has been a great support to the Irish community throughout her tenure and everyone at The Irish Voice would like to thank her and wish her well for the future.

Quizzes are always a popular addition to the St Patrick’s Festival programmes and the aptly named ‘That would be an ecumenical matter,’ won this year’s Fr Ted Quiz in the Columba Club in Coatbridge.

In Glasgow, meanwhile, a unique event featuring a screening of the seldom seen film by Pat McNulty detailed the 50th anniversary commemorations of the 1916 Easter Rising in 1966 and the trip by a group from Glasgow over to Dublin. That group—Theresa O’Connor, Seán Ó Fiannaí, Pat McNulty and Anne Curran—were all present at the screening, which enriched the experience for those in attendance.
In the sporting field, Gaelic footballers from St Patrick’s Primary School in Coatbridge emerged victorious in the festival’s annual GAA Tournament. They received their trophy from St Patrick’s Day Festival Committee member Kevin O’Hanlon.

On St Patrick’s Day itself, the Irish Consulate held an evening reception at the Assembly Rooms in Edinburgh, which was attended by a host of dignitaries and members of Scotland’s Irish community. Young musicians from the St Patrick’s Comhaltas Ceoltóirí Éireann club in Coatbridge opened the event with some fine traditional music, before Consul General to Scotland, Mark Hanniffy, warmly welcomed the invited guests. Independent TD and Minister of State for Disability Issues, Finian McGrath, who was invited to Scotland to attend the many St Patrick’s Day events spoke of the strong bond that exists between Scotland and Ireland and wished everyone a Happy St Patrick’s Day. The excellent Siamsoir dancers closed out the entertainment.

The following day in Coatbridge saw this year’s special guest and Celtic FC Foundation ambassador, Jay Beatty, meet with members of the festival committee, lead the procession into the town for the street festival, open the event itself (above) and even bump into his old pal Hoopy!

Talented singers from St Mary’s Primary in School in Coatbridge gave a rendition of Amhrán na bhFiann from the main stage, while their Coatbridge counterparts from St Patrick’s Primary School entertained revellers at the second stage further along the street, as did Irish dancers from the Stephanie Duff School of Irish Dance.

In Glasgow, the St Francis Pipe Band were among the first acts to entertain the crowd—including young Irish dancer Damien Fisher—at the family fun day in Merchant Square. Performance artist Ariel Killick, in her guise as Gráinne Mhór, was a big hit with the children at the event. Folk rockers, The Wakes, wowed the audience—which as always saw Donegal well represented—with a fantastic live performance to round off an excellent day.