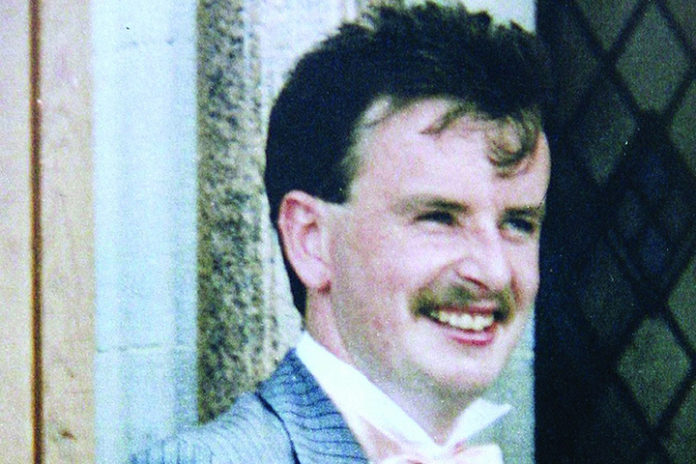 SINCE the last issue of The Irish Voice, the anniversary of Aidan McAnespie’s cold blooded murder has rolled around. Though the dark days of conflict are thankfully no more in Ireland, the past still needs to be dealt with in order to better understand different perspectives and to allow those affected to move on.

With that in mind, the true story of Aidan McAnespie must be told.

Background
Aidan was born into a Catholic family in Aughnacloy, County Tyrone, a small town with a Unionist majority. During his life, he would see many of his neighbours emigrate to the USA, Australia and even England because of the harassment that they received each day. “They say things like ‘Got any bombs today?’” reported one of his Gaelic Football teammates, Seamus Singleton. Meanwhile, a local Catholic priest, Fr Joe McVeigh, stated that sons from large families were targeted for harassment in the hope they would encourage their families to leave Ireland. In effect, it was ethnic cleansing by intimidation.

Unbowed and unwilling to yield to the bigots, Aidan got a job across the border at a poultry plant in Monaghan. A family man, who was raised by his grandmother, he rose to the rank of foreman. However, being a successful Irish Catholic wasn’t to the British Army’s liking and daily border crossings over the River Blackwater involved intensive searches. Aidan’s lunch would be taken from him, he would be subject to threats and his parents were reportedly told that a bullet was waiting for their son.

Rather than stand by and accept second-class citizenship in the land where they were born, the McAnespie family became involved in politics. Political discussion would eventually win the day and dismantle the notion of a so called “Protestant parliament for a Protestant people.” However, in the short-term, intimidation against Aidan McAnespie intensified after his sister Eilish decided to run for the Tyrone County Council as a Sinn Féin candidate. Aidan himself became an election worker for the party.

Killing and aftermath
On February 21, 1988, Aidan McAnespie passed through a British Army checkpoint, at the Tyrone-Monaghan border, on his way to Aghaloo GAA ground to play a football match. Moments later, a British soldier fired a shot which struck Aidan in the back and fatally wounded him.

Not content with gunning down an innocent man at the tender age of 23, the British Army claimed that the incident was an accident and that the bullets were discharged when a soldier was moving the gun with wet hands. Considering the force it takes to fire a gun, with the safety catch on,  the ‘accident’ claim appeared somewhat unlikely. Furthermore, British forces argued that the accidental shots had ricocheted off the road, into Aidan’s back.

After the killing, the area was sealed off. Bullet marks were present on the road once the forensic investigation took place, but there is more than a little suspicion that those were artificially created after the event. Most harrowingly, documents emerged in May 2018 revealing that the section of Aidan McAnespie’s rib cage, which contained the exit wound from the shot, was removed after he was murdered and had been disposed of.

That disgusting discovery prompted Sinn Féin TD Caoimhghín Ó Caoláin to ask the Dáil to push the Northern Secretary of State for answers. That request followed correspondence from Northern Ireland’s State Pathologist to the lawyers representing the McAnespie family.

Ó Caoláin said that the McAnespies ‘believe that the rib cage section was removed in the first instance to cover up the fact that Aidan was hit by a single bullet fired from above and not from a ricochet off the roadway behind him. That view is now confirmed in the minds of many by the revelation that the critical evidence could attest to the trajectory of the bullet that is now no longer available to us.’

The Tánaiste replied by explaining that he cannot compel the State Pathologist in Northern Ireland to provide information, but that he can raise concerns with the Secretary of State. He also said that he ‘can understand why you are asking the questions you are asking.’

At the time of the killing, charges were initially brought against 18-year-old Grenadier Guard, David Jonathan Holden, for manslaughter, but were dropped prior to prosecution. He was fined for negligent discharge of the weapon and, in 1990, was given a medical discharge.

Aidan’s family have always alleged a cover-up by the British Government and immediately questioned the likelihood of accidental discharge murdering their son from a distance of 300 metres. In addition to those suspicions, Aidan’s father told the Observer Magazine that 15 months before his son’s murder, a soldier told him: “I’ve got a bullet for your boy in this gun.”

Coming clean about the case
The importance of understanding past events like these cannot be understated. The Aughnacloy checkpoint became a target for a number of IRA attacks after Aidan was killed. Two attacks took place in 1994, the first when the outpost was hit by a mortar bomb on April 9, and the second when a van armed with a heavy machine gun spread the compound with automatic fire on May 26. Such violence cannot be condoned, but different perspectives can be understood if all sides learn about our troubled history. This education is even more important when it comes to preventing future violence.

It is high time the British Government came clean in this case. To do so would enable the McAnespie family to move forward without holding bitterness towards the state. Indeed, there cannot be true peace and reconciliation whilst so many feel slighted. Aidan’s case is one of many and all others should be dealt with by offering truth to allow closure and reconciliation.

The McAnespies have tried their utmost to achieve this.

In June 2008, the Police Service of Northern Ireland (PSNI) Historical Enquiries Team published its findings on Aidan’s murder. The report described the soldier’s explanation for the killing as the ‘least likely version’ of what happened. Still the British Ministry of Defence said it had co-operated with the inquiry and understood that this did not uncover any new evidence that would warrant further investigation.

In October 2008, the PSNI investigation concluded that Jonathan Holden’s gun required 9lbs of force to pull the trigger—without the safety catch on. It described the chances of this occurring, combined with hitting Aidan by accident as ‘so remote as to be virtually disregarded.’

In January 2016, it was announced that the Public Prosecution Service would review the decision not to proceed with charges against the soldier. Then, in June 2018, it was announced that David Jonathan Holden was to be charged with manslaughter by gross negligence over the 1988 killing. His trial was set for February 14, 2020, but no prosecution has taken place and the truth has still not been told.