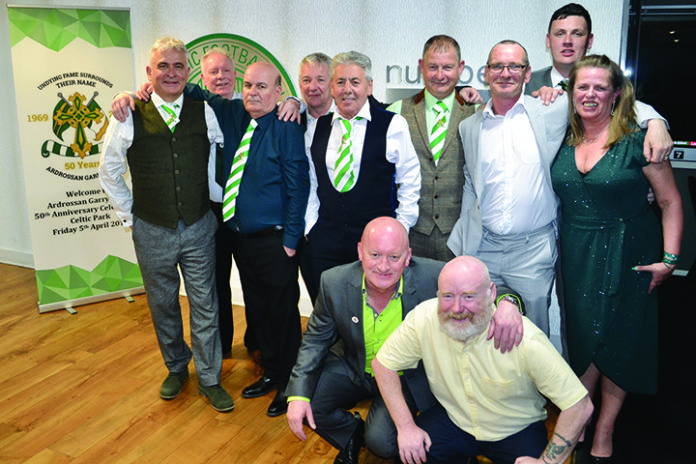 I WAS a member of the Ardrossan Garryowen CSC who travelled on the bus 50 years ago when it was formed. It was founded in 1969 in Ardrossan and I’m pleased to say that today the club still has a healthy membership and continues to take people from the three towns of Ardrossan, Saltcoats and Stevenston.

Early Celtic connections
At the start of the 1800s, the population of Ardrossan was around 1500 and the three towns less than 5000 combined. For contrast, the current population of all three amounts to 35,000. Population growth began in 1825 when Lord Eglinton began to build Ardrossan Harbour, a project that was eventually completed in 1964. The Great Hunger in Ireland led to many Irish immigrants—both Catholic and Protestant—arriving in North Ayrshire attracted by the work that was then available in the area. There were coalmines at Ardeer and Auchenharvie, the Nobel Explosives Company—founded in 1871—and also the ICI.

In the 1870s, organised football matches started to take place and became popular throughout Scotland. Celtic, as we know, was founded to feed the poor and hungry—the bulk of them Irish immigrants—in the east end of Glasgow. In 1896, a football club was formed in Ardrossan called Ardrossan Celtic, who played in North Crescent. They were active from 1901 until 1913.

What this all pointed to is that there were many people who had come to Scotland from Ireland—the three towns in particular—and they had a keen interest in football.

Garryowen and the golden era
Jock Stein arrived at Celtic in 1965 and it didn’t take long for him to make his mark, as we won the Scottish Cup that year beating Dunfermline 3-2—a game I was at. In 1967, Jock and the Lisbon Lions won the European Cup—and everything else—and went on to win 9-in-a-row.

Like many young men at that time—and football was mainly a male-dominated pursuit back then—lots of people travelled from the three towns to watch Celtic. I travelled with my uncles either by car or on the Saltcoats and District Bus. They were great times to be a Celtic fan.

While many fans travelled on the aforementioned supporters bus, there was a desire to form a bus from Ardrossan. Peter Brogi and others decided to hold a meeting on September 17, 1969 in the town’s Eglinton Hotel. It was advertised in the Ardrossan and Saltcoats Herald and generated a lot of interest. They asked Gerry Long—who was the vice president of the Saltcoats club—to become the president of the new club as they needed someone responsible. Joining him on the committee were: Harry Gribben (treasurer), Andy Hyslop (secretary), Pat Sweeney (social convenor) and Jim Gillen and Peter Brogi (committee members). Among the other members involved in the early days were: Michael Collins, Ennis McHugh, John Murray, Pat Gillen, Jim Kelly and David Boyle. While many of them have sadly passed away, Peter Brogi still follows Celtic and travels to the matches on the Blackpool Shamrock bus, which is run by his son Stevie. On occasion, his grandson Michael goes on the bus too, so you have three generations travelling to see Celtic on the same bus, which must be unusual.

What’s in a name?
While the club had now been formed there were early teething troubles.

“The Benfica game in the European Cup was coming thick and fast but due to admin issues the new club couldn’t get tickets as a supporters club as yet” Peter Brogi recalled. “This led to Pat Sweeney, Andy Hyslop and myself driving up to Celtic Park on October 18, 1969, to join the queue for public sale tickets. As chance would have it, Pat’s brother John was over from Donegal with a couple of pals looking for work. We met up with them in the Garryowen Bar in the Gorbals, then headed on to Celtic Park and with the help of three young boys—as we were only allowed four tickets each—and joining the queue twice, we managed to get 56 tickets!

“We then headed back to the Gorbals, dropped John and his pals off at the Garryowen Bar and then headed down to St Peter’s in Ardrossan for a meeting that was just about to finish as we arrived. The first committee had been formed with Gerry Long as president chairing it, but there was still the question of naming the club. Among the names suggested were The Shamrock and St Peter’s. John Murray suggested the Ayrshire Ploughboys, but that was quickly shot down. Given that the Garryowen Bar in Glasgow was a big Irish/Celtic pub and it had played a part in us getting our first batch of tickets, it was unanimously agreed that Ardrossan Garryowen was to be the name of the club.

“The first bus was arranged for the League Cup Final against St Johnstone on October 25, 1969, a match in which Celtic won 1-0. The club has since gone from strength to strength and that year we also managed to run our first dance with an Irish showband called the Freedom Fighters playing in the Kilmeny Hotel.”

Throughout the next 50 years, the Ardrossan Garryowen has run buses to almost every home game at Celtic Park.

Historical highlights
In 1970, the club opened a shop in Glasgow Street, where it ran a weekly ticket scheme where you had to buy or sell 12 tickets at 5p each, which would ensure that all members could travel free to every game in Scotland. Even though the windows were smashed more than once, this didn’t stop the club’s growth and we were able to run double decker buses to most home games at Celtic Park. In fact, the European Cup semi-final against Leeds at Hampden Park in 1970 saw us running two double decker buses and a single decker bus to the game taking around 130 fans with us.

In 1970, when we reached our second European Cup Final in Milan against Feyenoord, we ran a bus to the game and there is actually a photo of the fans as they prepared to board the bus in Ardrossan for the long trip to Italy. It cost the 30 travelling members £15 a head, they left on the Saturday and returned home the following Sunday! This era was also the start of many Celtic fans travelling abroad to watch Celtic and the Garryowen has run many memorable trips since then to the likes of Madrid, Switzerland and Belfast, stories which would require a feature of their own!

In 1971, the Garryowen opened a social club in the town’s Princes Street, which became very successful and had as its first president Lisbon Lion and three towns local, Bobby Lennox. The club continued to grow and later moved to new premises in Arran Lane. It served as a focal point for Celtic supporters and many great social functions and club night were held there, with the night of the 10 men winning the league in 1979 in particular standing out, not least because it was a Monday and people had to go to work the next day! Although it closed in 1990, the bus continued to travel to games.

In 1975, we also started our own football team and played in the local Sunday League. It was decided that we would play in Celtic strips, which meant that every time we took to the field it caused a bit of a stir with non-Celtic fans and turned every game into almost a cup final or derby match! The team played throughout the late 1970s and 80s and even managed to win a few trophies. Not all the players who played for the team were Celtic fans but they all wore the Hoops with pride, we even managed to get Bobby Lennox to turn out for us, which was fantastic!

Of course Bobby’s not the only three towns hero to have played for Celtic. Roy Aitken was another from the area who played for the club in the 1970s and 80s, captaining the side on many occasions—not least in our centenary year when we won the double—and made 667 appearances for the club scoring 55 goals.

Mark Reid is another player from the three towns who played left back for the club, making 177 appearances for Celtic between 1980-85, scoring 12 goals.

With hope in their hearts
Through the 1990s, when the old Rangers were doing 9-in-a-row, it was more difficult to keep the supporters’ bus going, but keep going we did through those trying times, with the committee continuing to hold fundraising dances and events to keep the club active. Some of the current Garryowen members have been there for the last 30 years or so and have been rewarded for their dedication by witnessing us stopping 10-in-a-row, the Martin O’Neill era, the UEFA Cup run to Seville and, more recently, the double treble. Although there have been hard times, it’s worth noting that since the 1960s and the history of the Ardrossan Garryowen, Celtic have won more league titles than any Scottish club in every decade with the exception of the 1990s when the old Rangers did their 9-in-a-row, spending money they couldn’t afford to do so and we know how that ended up!

Throughout it all, lots of people have put much time and effort into keeping the bus running. Special mention must be made to guys like Wullie Gorman, former president of the club, who helped to run it for more than 20 years and hardly missed a game. He always worked tirelessly to get tickets for members, run buses and then organise smaller buses and cars for away games when tickets were hard to come by. Rab ‘Stix’ Dickie is another member who has followed Celtic on away games in Europe for around 40 years and has been on more than 100 trips abroad. Whenever he does so, he always wears a Garryowen polo shirt and is widely recognised by the travelling Celtic support, raising the profile of the club in the best way, except perhaps, when he’s had too much to drink and gets a bit rowdy!

The core of the Garryowen still comes from the three towns and goes to almost every game. I cannot name them all but they are the reason why the club is still going strong—the members. The current committee of Franny Boyle, Owen Gorman, David ‘Spuds’ Hughes, Steffan Morris and Michelle Keogh do an excellent job, keep the bus going and were instrumental in organising the 50th anniversary celebrations. They, and all the members throughout the years, are the reason that we celebrate the club’s history and it’s a history to be proud of. Here’s to the next 50 years!