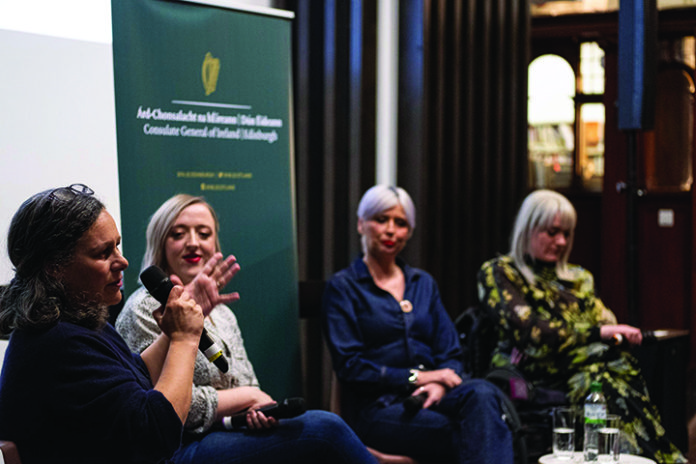 ST BRIGID’S Day was officially marked in Scotland for the first time with an event hosted by the Consulate General of Ireland in partnership with the Celtic Media Festival.

Held in Glasgow Women’s Library on the eve of St Brigid’s Day—February 1—the event celebrated the creativity and talent of women.

The St Brigid’s Day Festival, which began in London in 2018, is now being celebrated at Irish embassies and consulates worldwide. In the UK, Irish associations, the Irish Chaplaincy in London and the Irish Consulate in Wales participated this year. Glasgow and Donegal singers, the Friel Sisters performed in the Irish Cultural Centre in Hammersmith. Scotland’s event—a celebration of the creativity and talent of women in the media—was introduced by the Consul General, Jane McCulloch, who paid tribute to the woman who was the embodiment of leadership in her own time and continues to inspire today.

“Brigid is associated with fire and her flame burns constantly in the middle of the square in Kildare,” Jane McCulloch said. “A few steps from there are the remains of her fire temple. She is responsible for craft and creativity, which is the over-arching Brigid theme of celebrating creativity.

A panel discussion among the women, ‘Irish, Scottish, and with a foot in both camps,’ was chaired by best-selling the writer and author, Sara Sheridan. The panellists discussed the challenges of being a woman in the media, the strides which are being made in the quest for parity, and the difficulties still being faced.

During the conversation, writer and filmmaker, Scottish-born Margot McCuaig described how she has come to think of herself as a Celt.

“Rathlin Island, creatively, soulfully and spiritually, is my home but Glasgow is the place, physically, where I do my work so I’ve always been betwixt and between, but now that I see myself more broadly as Celt I feel good about that,” she said.

Also on the panel were Dublin-based journalist, Louise Bruton who provided music for the evening, and Catriona Logan, Festival Director of Celtic Media, the annual three-day event that promotes the languages and culture of the Celtic Nations and Regions in media

The legend of the goddess Brigid begins in the mythology of pre-Christian Ireland, when she was known as the daughter of the chief of the gods, The Dagda. Brigid was a goddess in her own right and associated with healers, poets, smiths, childbirth and inspiration.

As Christianity spread through Ireland, the Celtic goddess Brigid shared her name with St Brigid of Kildare, founder of several monasteries and a healer of the sick. St Brigid is also known as Mary of the Gael. Her feast day on February 1 marks the beginning of spring.

Jane McCulloch added: “Brigid was responsible for craft and creativity and we are here on the eve on Imbolg the ancient Celtic festival at the beginning of the fertile season exploring these themes of the Brigid—who she was and is and what she represents. Glasgow Women’s Library is an obvious place for us to start our celebrations here in Scotland. We say a huge thanks to the women her for embracing and running with our new venture.”