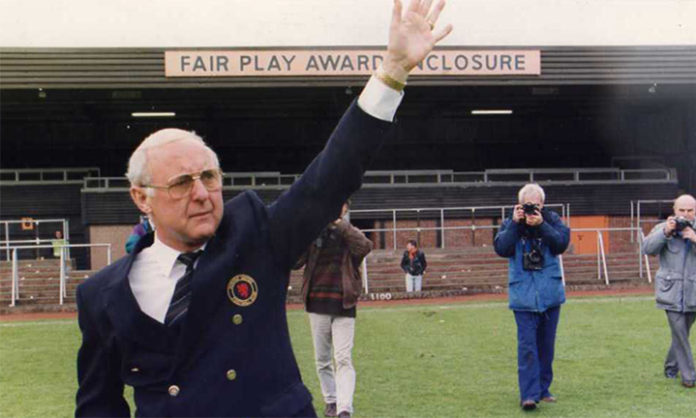 SAD news came out of Tannadice recently as United announced the death of club legend Jim McLean (above) who died at the age of 83 after a long battle with illness.

“Jim was an integral part of our history and rise to the forefront of European football,” the club statement read. “Jim was simply a titan of Dundee United folklore, cherished by the United family the world over.”

In relative terms, what McLean achieved for a provincial club like Dundee United was incredible. He led them to the club’s only Scottish Premier Division title in 1982-83 after consecutive League Cup triumphs in 1979 and 1980.

He also took the club to the European Cup semi-finals in 1983-84 where a controversial defeat to Roma would deny United a place in the final against Liverpool. United would also become the first Scottish team to play in a Uefa Cup Final three seasons later, yet again losing out 2-1 to Gothenburg in the final over two legs.

McLean managed United from 1971-1993 making them not only a force in the top flight of Scottish football, but also regulars on the European scene. Memorable nights where his sides saw off the likes of AS Monaco, Borussia Mönchengladbach and FC Barcelona at a ‘sardine like’ Tannadice is still the stuff of dreams and legends.

Tributes came flooding in from all over the footballing world with toe curling stories from ex-players who remember their experiences fondly. Former captain Maurice Malpas—who spent his entire career at Tannadice played in the title winning side while picking up 55 Scotland caps on the way—recalled McLean as terrific motivator, an old school disciplinarian and ahead of his time in many ways.

“He was miles ahead of everybody,” he said. “We were doing things in the early 1980s with dieticians, nutritionists, sports scientists, fitness coaches… He was ridiculed at times because he had sports psychologists in trying to get that extra one or two per cent where now it’s just part and parcel of the game.

“He was like a tough headmaster. He was the boss and he made sure you knew he was the boss. When he barked, you jumped. What people nowadays have got to realise is that in the 1970s and 80s that was how football was run, managers dictated with an iron fist, guys like Alex Ferguson, Jim McLean, Jock Stein and Jock Wallace.”

In total McLean took United to 10 finals winning three of them, with the Scottish Cup unfortunately ‘the one that got away’ during his tenure. Ironically though, with a new man at the helm in Ivan Golac, United would end that particular hoodoo in 1994 defeating a much fancied treble-bound Rangers side 1-0 in the final.

The club’s statement also included a message from McLean’s family, who added: “Jim was a much-loved husband, father, brother, uncle and father-in-law, and we will all sadly miss him. Those sentiments are indeed echoed all around the city regardless of football allegiance.

Current manager, Micky Mellon, also had his say on his legendary predecessor. Mellon told the club website: “I only feel privilege. His legacy is still very clearly here, you only have to walk through the club and you can still feel it all around you which is terrific and so it should be.

On the field, Dundee United have maintained their mid-table position after a busy holiday period. A defeat to Celtic turned out to be a routine win for the Parkhead side, while Rangers faced a much sterner test at Tannadice although they ran out out 2-1 winners. A much-needed win at home to Kilmarnock saw maybe the best performance of the season to date, while an added time goal secured a point with Hibs at Easter Road in a 1-1 draw. That fighting spirit was also evident with the same outcome against Motherwell, where with virtually the last kick of the ball a share of the spoils was earned. In among all that, there was an almost unforgettable 0-0 draw up at Aberdeen, which in fairness is never an easy place to go.