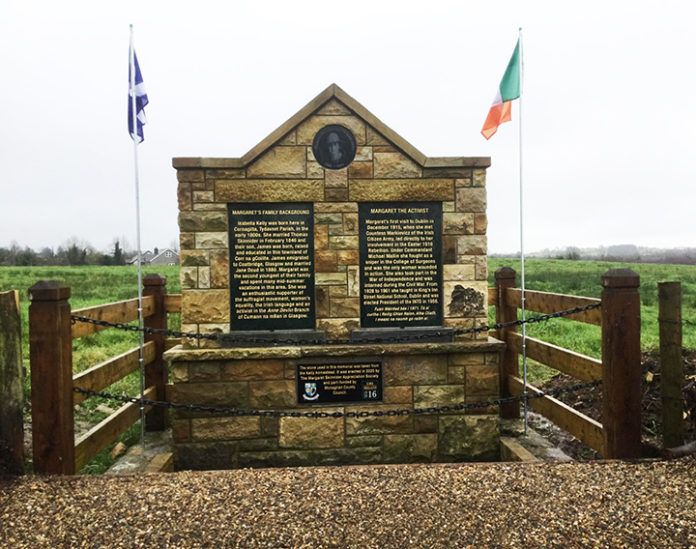 LAST MONTH, in the townland of Cornagilta—which lies between Tydavnet and Scotstown in County Monaghan—an impressive monument was erected to the memory of the redoubtable Irish patriot and veteran of the 1916 Rising, Margaret Skinnider.

The inscription on the base of the nine feet high and eight feet wide monument (above), acknowledges that the sandstone used was from the on-site ruins of the patriot’s ancestral home.

The die of the main structure incorporates two plaques giving a short résumé of her family background and Margaret Skinnider’s public life. Pat McKenna who is a master craftsman, executed all other aspects of the monument from conception to completion.

The project was initiated by the Margaret Skinnider Appreciation Society (MSAS), which is comprised of local people who are proud of her connections to the area.

Since the inception of MSAS in 2015 considerable work has been done to mark the contribution of Máiréad Ní Scineadóra to Irish life from 1914 until her death in October 1971.

Focusing on Margaret’s life at the unveiling, Angela O’Hagan, Secretary of MSAS, brought the audience from James Skinnider’s leaving the Cornagilta area to Margaret’s birth in 1892 in the then industrial town of Coatbridge in Scotland, her early life and frequent visits to her grandmother, Isabella Kelly, in Cornagilta, her qualifying as a teacher, involvement in the suffrage movement, her joining the Anne Devlin Branch of Cumann na mBan in Glasgow and subsequent involvement in the Irish freedom struggle.

Mrs O’Hagan remarked that it was her strongly held belief that people, men and women, should fight for their entitlement, that made her an integral part of the Irish National Teachers’ Organisation (INTO) strike committee in 1946: the strike lasted six months.

Her career as a teacher in Dublin, her struggle for women’s rights, her trade union involvement and membership on the executive body of the ITGWU, her address to the World Confederation of the Teaching Professions and her love for the Irish language from her youthful membership of the Gaelic League in Scotland were testament to the ability and persistence of this formidable woman.