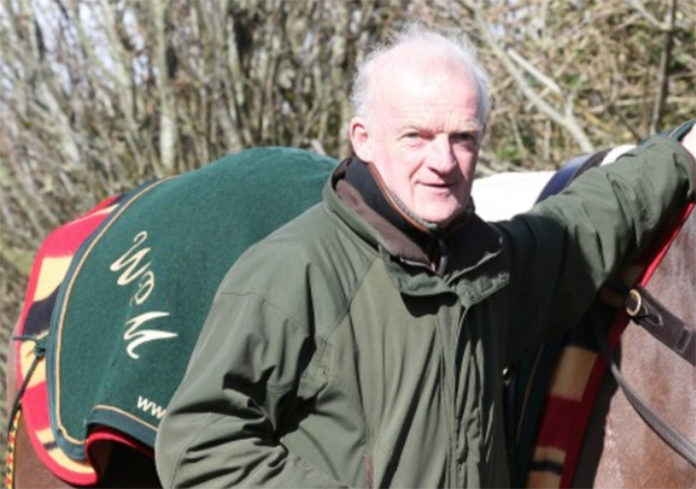 SO that’s Cheltenham over for another year and it was a great festival for the Irish once again. Irish-trained horses were responsible for the the first three in eight races—the Mares Hurdles, Ballymore Champion Bumper, Marsh Novices Chase, Pertemps Final, County Hurdle, Albert Bartlett and the Grand Annual—that accounts for nearly 29 per cent of the races.

The home team sent out the first three in only two of the 28 races—or seven per cent of them—namely the Brown Advisory and Merriebelle Stable Plate and the Champion Chase. There was no Irish runner in the feature race on day two following the late withdrawal of Chacun Pour Soi due to a foot abscess.

Willie Mullins (above) finished as leading trainer after a slow start with 13 losers before winning the Champion Bumper and he had four favourites beaten at that stage, two of whom were odds on. He then won seven out of 15 for the rest of the meeting. Gordon Elliott also had seven winners but had fewer placed horses than Mullins, so the top trainer’s title was a very close run thing. All-in-all it was a great Cheltenham for both of them.

The silver lining for the home team was that they were so close to winning all the Championship races, had Santini caught Al Boum Photo and joined Epatante, Politologue and Lisnagar Oscar as Championship race winners.

It was great to see Al Boum Photo win the Gold Cup again as many in the past like Rock On Ruby, Finian’s Rainbow and Big Bucks had tried and failed. It was a great reminder of just what a brilliant horse Al Boum Photo is, so roll on next year!