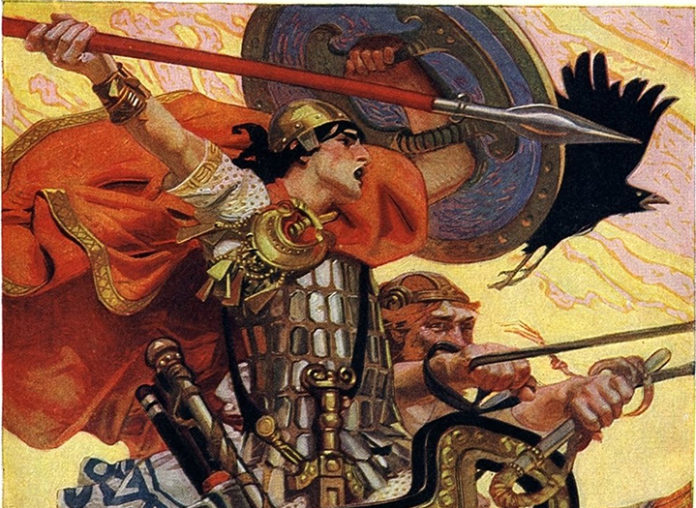 IRISH literature is a vast world of captivating mythology, brimming with imagination and wonder. There are many cycles of ancient Irish literature, all of which harbour great heroic—often magical—tales, most notably the Ulster Cycle. Set in the 1st century BC, it consists of a number of tales surrounding the age of the Ulaids. Often Irish mythology will have crossover with Scottish tales, such as stories within the Ulster Cycle that are set in Scotland. The legend of the godlike Cú Chulainn is one such story. The son of the Celtic god Lugh and a mortal woman, Cú Chulainn grew up to be one of the most tragic figures known in ancient Irish literature.

Origins
Cú Chulainn was destined to be a warrior from birth, although his birth-name was Setanta. That title was dispensed with after a journey to feast with King Conchobar MacNessa—commonly known as Conor of Ulster—who resided in what is now known as Armagh. The king feasted in the home of Culann the Smith, who guarded his home with a ferocious dog as well as more than 100 young troops.

Setanta overcame the guards and killed the hound as well. Devastated to see his dog die, Culann the Smith was heartbroken. That void was soon filled, however, as Setanta volunteered to protect Culann’s home as the dog once did. Thereafter, Setanta would be known as Cú Chulainn—medieval Irish for ‘the Hound of Culann.’

Warrior in training
The Ulster Cycle centred around the conflict between King Conor of Ulster and Queen Medb of Connaught. This rivalry soon swelled into the epic Cattle Raid of Cooley, in which Cú Chulainn played a large role. However, long before that great battle was to commence, Cú Chulainn had to become a warrior. Many claim he was trained on the Isle of Skye, where he was taught how to fight by the female warrior Scathach in her school for heroes. This school was in Dún Scáith, where Cú Chulainn was gifted Gáe Bulg—a barbed spear which he would make heartbreaking use of in the aforementioned Cattle Raid of Cooley.

Family
Sources suggest that Cú Chulainn was not as honourable as many say. During his training with Scathach on Skye, he helped his teacher make peace with the chieftain Aífe, who was stirring up conflict on the isle. After settling this unrest, it is said that Cú Chulainn slept with Aife, which ended with her bearing his son. Years later, this son would come to visit him in Ireland, but Cú Chulainn would mistake him for an intruder, and kill him before realising. Cú Chulainn also slept with the daughter of Scathach, as well as with Scathach herself upon completing his training.

Following this pattern of hedonism, Cú Chulainn settled down with a woman named Emer. He had tried to wed her before, but due to her father’s cynicism, he was forced to complete a myriad of laborious tasks, including completing his training on Skye, before he had proved himself worthy of Emer’s hand—or, rather, believed he had proved himself worthy. To Cú Chulainn’s dismay, Emer’s father remained unimpressed with his daughter’s fiancé. A lust for glory overtook him, leading to the warrior taking over the fortress of Emer’s father, killing him along with dozens of his guards and taking all the treasure he had stored there. After that, there was nothing to prevent their marriage.

Happily married, it seemed Cú Chulainn was satisfied, although this did not last long. Soon he discovered the fairy princess Fand and became infatuated with her. Unsurprisingly, Emer was displeased with her husband’s unfaithfulness, and so was Fand’s husband, Manannan. One day Manannan met Fand in the countryside, a short time after she had become estranged from him to be with Cú Chulainn. This meeting made Fand realise the true love she had thrown away. Desperate to have her husband back, Fand wanted to forget she had ever been with Cú Chulainn, and so Manannan cast a spell so that all parties involved in the infidelity had the betrayal and hedonism wiped from their memories. Manannan and Fand reunited, as did Cú Chulainn and Emer.

It began with King Ailill of Connaught engaging in a vain argument with Queen Medb over their wealth. They compared riches and were determined to be seen as the most wealthy and royal. In the end, Ailill was victorious, only because he owned an expensive white-horned bull for which Medb had no cattle to compare with. In defeat, Medb let the conflict end, though she was still determined to prove herself more wealthy than her husband. After sending off scouts, she learned that there was a brown bull in Cooley, which undoubtedly would have proved Medb richer than Ailill.

Medb sent a messenger to retrieve the bull from Daire of Cooley. Daire gave away his bull in exchange for 50 cows and some land, although he changed his mind once he overheard Medb’s men claim that Daire was lucky he agreed to the terms, because otherwise Medb would have used force and taken the bull after slaying the people of Cooley.

Overcome with pride, Daire refused to let his bull go to Medb, and set out to prove his strength to the Connaught Queen. He provoked her to war with him to decide who kept the brown bull through bloodshed. Medb accepted the challenge, sending hundreds of troops into Ulster without hesitation. At first, victory for Ulster seemed a fantasy, since most of Ulster’s soldiers were under a curse which rendered them incapacitated, but the tide soon turned as Cú Chulainn arrived to fend off the intruders with his barbed spear.

The Cattle Raid reached its climax when Cú Chulainn faced off against an unexpected foe—his childhood friend and foster brother, Fer Díad. After three days of constant battle, he was forced to kill his foster brother and, with the Ulster forces now ready to fight, the enemy was crushed. Unfortunately, though, the brown bull had been captured by Medb’s forces before her army was defeated, and with it she killed Ailill’s white-horned bull. Medb may have been defeated in war, but she would never lose an argument with her husband.

A tragic end
As noted previously, Cú Chulainn is a tragic character in Irish literature. His was a life of hedonism and glory, but grief was ever present too, like a miserable cancer spreading through him the more he fought. From slaying his foster brother in the aforementioned Cattle Raid of Cooley to him accidentally killing his son in Ireland, he mourned as much as he battled.

His own death, likewise, was just as unpleasant. Medb conspired with Lugaid, son of Cú Roí, Erc, son of Cairbre Nia Fer, and the sons of others to have Cú Chulainn had killed. Trickery was used to weaken him for the fight ahead of him. Lugaid had three magical spears made, and it is prophesied that a king will fall by each of them. With the first he kills Cú Chulainn’s charioteer Láeg, king of chariot drivers. With the second he kills Cú Chulainn’s horse, Liath Macha, king of horses. With the third he hits Cú Chulainn, mortally wounding him. Cú Chulainn ties himself to a standing stone to die on his feet, facing his enemies. This stone is traditionally identified as Clochafarmore, located near Dundalk.

Due to his ferocity, even when so near death, it is only when a raven lands on his shoulder that his enemies believe he is dead. Lugaid approaches and cuts off his head, but as he does so the ‘hero-light’ burns around Cú Chulainn and his sword falls from his hand and cuts Lugaid’s hand off. The light disappears only after his right hand, his sword arm, is cut from his body. According to the Annals, Cú Chulainn died in the year AD 1. And thus the fiercest warrior of the Ulster Cycle was slain.