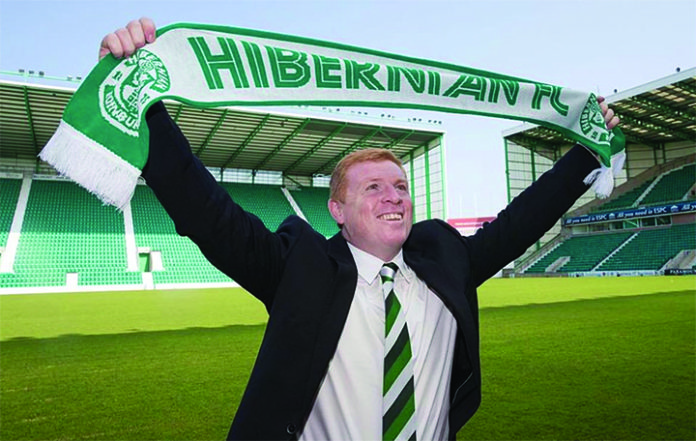 NEIL Lennon’s departure from Easter Road at the end of January brought to an end a largely wonderful period for fans of the Easter Road side—a period that will no doubt be looked upon fondly by most Hibbies and by the Irishman himself.

I was asked to take over The Irish Voice’s Hibs coverage at around the same time as he was first appointed and it’s been a pleasure to write about the club that I love while it was being managed by a man that I have the utmost respect for. He even did a great feature for this paper back in early 2017 just after Hibernian had annihilated Hearts in a Scottish Cup replay at Easter Road.

An exciting era
Neil was brought in to Hibernian in the summer of 2016 to replace Alan Stubbs, who departed after winning the Scottish Cup—the first time Hibs had won that particular trophy since 1902. Though understandably a legend because of the cup-win, that triumph masked the likable Scouser’s two failed attempts to get the Easter Road club back into Scotland’s top flight, following dismal relegation under the bungling Terry Butcher in 2014. Stubbs’ side lost 24 of their 100 competitive matches in the two seasons under his stewardship. Lennon (above) lost 26 matches out of 123 games, including top-flight matches and European ties.

One could argue that Lennon had a thankless task when appointed in 2016. Though the club was atop the crest of a great wave of optimism following the Scottish Cup win, it was still stuck in Scotland’s second-tier. His sole mandate was to win the title in his first season and he did so with great ease and with ruthless efficiency. Had he failed to do so both he and the club may have found themselves to be figures of ridicule. But he did win it, succeeding where Alan Stubbs had twice failed and losing only three league matches in the whole campaign, as well as taking his lower tier side back to Hampden in April 2017, where Hibs unluckily lost out 2-3 to Aberdeen in the Scottish Cup semi-finals—the best defence of the trophy by a non-Glasgow club in decades. A valiant effort in the Europa League—as a result of the Scottish Cup win—saw the Hibees edged out by Danish cracks Brondby only after a penalty shoot-out in Copenhagen, after winning their first European tie ‘on the night’ (1-0) away in a major European tournament Europe since Alex Miller’s men beat Videoton in 1989.

Season 2017/18 saw Hibs return to the top flight and proceed to have their best season in it since the modern ‘premier league’ system’s adoption in 1975. Rangers were beaten twice in the league at Ibrox, Hearts were humbled twice at Easter Road while Lennon’s four encounters with champions Celtic brought one narrow defeat, two thrilling 2-2 draws and a fine 2-1 victory at Easter Road. Lennon also took Hibs back to Hampden in October 2017, this time in the League Cup semi-final against Celtic. Hibs lost 4-2 to the tournament’s eventual winners, despite putting up gallant resistance. A flukey late Hearts goal at Tynecastle prematurely ended Hibs’ 2018 Scottish Cup campaign. Hibs only ever received one real hiding under Lennon’s stewardship, which was a 1-4 defeat up at Aberdeen late in 2017. Lennon’s Hibs lost just seven league matches in their first season back in the top flight, finishing 4th and qualifying for Europe once more.

The summer of 2018 saw Hibs lose midfielders Dylan McGeouch and John McGinn. To lose Scotland’s best midfield engine room outside of Celtic was a serious blow for Hibs fans, and yet, right up until Boxing Day Hibs were doing okay. Only seven out of 28 matches in all competitions had been lost. The club had just missed out on another Hampden trip after losing a penalty shoot-out to Aberdeen in the League Cup quarter-finals, following a 0-0 draw at Easter Road. Lennon also led Hibernian and its fans on the club’s longest European run since the 1970s, overcoming Runavik and Asteras Tripolis in the Europa League qualifiers, only to lose out to top Norwegian side FC Molde.

There were, however, perhaps a few too many points dropped between mid-October and the year’s end, with a few irksome defeats and several draws, but three of those draws were against Hearts and Rangers, while that run also included a fine home 2-0 victory over Celtic. In many ways, the confident, swaggering Hibs team of the last few years went into hiding after the 6-0 hammering of Hamilton in early October, and has rarely been seen since, save for in a few glimpses. It’s testament to the positive effects of both the Stubbs revival and the Lennon renaissance at Hibs that mid-table mediocrity isn’t acceptable to some Hibs fans anymore.

Departure
The nature of Lennon’s sudden departure shocked many Hibs fan—many of whom adored the man from Lurgan. He understood certain things about the Hibs support, chiefly that doing well in the Edinburgh derby and in matches against the two main Glasgow sides is of paramount importance to most of the fans, as is doing well in the cups. But Lennon also brought to Hibernian a steely mentality that had been missing for decades—perhaps since the 1950s—a mentality of not giving up, not accepting second best and of self-belief. It rubbed off on the fans, too, and a support, swelled since the cup-win and singing loudly both at home and away, which once feared late collapses and hidings in big matches, now conducts itself with a pride and swagger that belies their morale of early 2014 and its preceding years. Neil Lennon helped change Hibs for the better.

Facing hatred and bile
Of course, he had his critics. His Irishness, his faith and the fact that he stands up for himself and speaks his mind have, sadly, often attracted the ire of a minority of the lowest form of bigots in Scotland. He’s been assaulted twice inside stadiums and had bullets in the post. His temper on the touchline has sometimes been questioned, but never his passion. When subjected to torrents of vile, poisonous abuse from fans of certain clubs, he simply let his team do the talking, then responded with light-hearted inoffensive gestures such as ear-cupping or pretending to be an aeroplane. These mild, joking responses seemed to attract more media attention than the actual abuse which he was subjected to, which says a lot more about part of Scotland as a country than it does about Lennon. Hibs were the victims of several mind bogglingly bad refereeing mistakes while Lennon was at the helm, too, such as Oli Shaw’s ‘goal that never was’ at Tynecastle, which, along with other mistakes, ultimately meant that Hibs finished fourth last season, instead of second.

Fondly remembered
The circumstances of Lennon’s departure from Hibs really don’t matter now. We at The Irish Voice—and I’m sure all Hibs fans—wish him all the best wherever he manages next. We also offer our best wishes to Paul Heckingbotton and Robbie Stockdale as they take over at Easter Road and hope that they can continue the good rebuilding work started by Alan Stubbs and progressed greatly under Neil Lennon and Garry Parker. The stadium is great, the club is financially sound, Hibernian has excellent training facilities and 14,000 season ticket holders—the ingredients for further success are there. Scottish football needs a strong Hibernian and the Hibs go marching on, with a new boss but with the same, passionate, loyal supporters.

As for the old boss, his finest moment in the Hibs hot-seat came perhaps in February of 2017, in the Scottish Cup replay against Hearts at Easter Road. Hibs were the cup’s holders. The streets around Easter Road before and after the game and the home stands during the match were one massive party, as if a huge green and white organism had been created by the buzz of the cup win under Stubbs and the impending promotion under Lennon. The song of the night was Dion’s 60s hit Runaround Sue, the lyrics changed to say simply ‘Hibs, Hibs.’ A year earlier, Stubbs’ side squeezed past Hearts 1-0 in a nervous encounter, with the home fans relieved to be through at the end. But, on that night in February 2017, Championship Hibs annihilated Premiership Hearts 3-1 amid one of the best atmospheres at Easter Road in the last 30 years. And at the end, as Sunshine on Leith was sung, one man in a black tracksuit stood on the pitch at Easter Road, saluting the green and white legions in the stands. It remains the most iconic picture of that man’s time at Hibs. That man was Neil Francis Lennon, the man who gave Hibs fans their mojo back