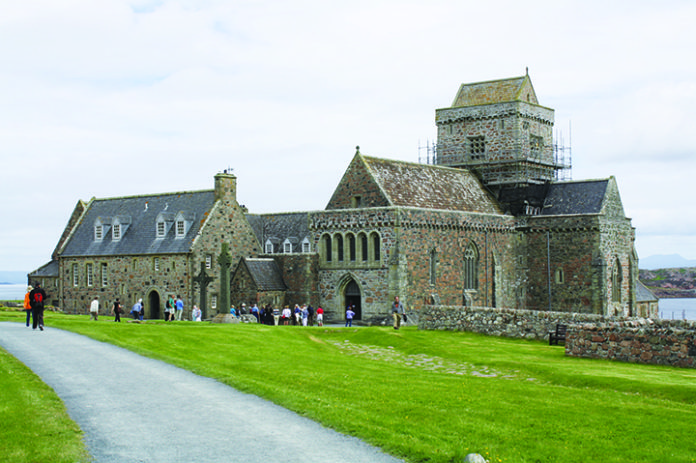 DERRY and Strabane District Council and Donegal County Council have joined forces to get ready for the 1500th anniversary of the birth of St Columcille, which will be marked throughout 2020 and 2021.

St Columcille, better known as St Columba in Scotland, was born at Gartan in County Donegal in 520AD or 521AD, founded a monastery at Doire Cholm Cille, now Derry, in 545AD, and came to Iona in 563AD.

The two councils are planning a series of events and strengthening links with Columban sites in Scotland after carrying out an audit of St Columcille’s heritage sites around Derry and Donegal. These include the Columcille Heritage Centre at Gartan, the site of the monastery in Derry, and the spot from which he sailed from Innishowen to Iona with his monks. Sites in Scotland include Iona (above), Kirkcolm, outside Stranraer, which is home to St Columba’s Well, Loch Ness, where the saint is said to have defeated Nessie herself, and Kilmacolm in Renfrewshire, where the town’s name translates as the Church of St Columba.

Aedin McCarter, Derry and Strabane District Council head of culture, said: “Columcille’s story is a very timely one. He was renowned for uniting traditions, transcending culture, religion and history in a very special way. It is right that we mark the 1500th anniversary of his birth and we will be doing that through a series of events in Derry and Donegal and in Scotland, too.”

Full details of the Columcille 1500 events will be released later in the year as a significant religious celebration in its own right, as a tourism drive and as a way of strengthening existing links between Donegal and Derry. And the councils are calling on organisations on this side of the water, to join with them in giving this important saint as high a profile as possible, especially as he has universal relevance and appeal across the denominations, being equally revered, for example, in Iona, as back home in Donegal.

Where to start?
One of the best places to start any study of Columba, has to be at Gartan in County Donegal, identified in the Columban audit as giving an essential grounding in the earliest days of the saint who was both and who grew up in this unique part of Donegal.

We visited the centre last summer, on the way back from Gweedore to Glasgow, and we were shown round by an excellent and enthusiastic, local guide. He was in his last year at school, and had landed a summer job of running the centre, greeting visitors from all over the world with ease, and displaying an expert knowledge of, and devotion to, the saint himself.

First stop was the centre’s audio-visual presentation, which tells the story of Columba, from his birth at Gartan, through his exile and life in Scotland, to the saint’s death at Iona in 597AD. There’s also a film sequence of the late Cardinal Thomas Winning visiting the centre, as part of the presentation, as a reminder of just how easily this saint straddles the Irish and Scottish Catholic traditions.

A series of information boards and banners record the major events of Columba’s life, from founding his monastery in Doire Columcille, to give the city now known as Derry its original and proper name. It translates from Irish as ‘Columcille’s Oak Grove,’ and Columcille is much revered in Derry as the city’s patron saint, with the Church of Ireland Cathedral bearing his name.

What the centre does, is explain the life, times and missions of this remarkable saint who still chimes for us down the centuries. A Donegal man, who studied at Movilla Abbey at what is now Newtonards, under St Finnian, who, himself had studied at St Ninian’s foundation at Whithorn, he later came to Scotland, like so many of his fellow countrymen, and helped spread the Gospel.

The centre is situated on the shores of peaceful and beautiful Gartan Lough, where you can see a set of stones known, traditionally, as St Columcille’s Stepping Stones, which the saint used to skip across the surface of the water, and a short drive will take you to the site where he was born.

Here, a stone slab is reputed to be where his mother, Eithne of the Cenel Conaill—the Dougherty clan is a sect of the Cenel Conniall, so I can claim being related to Columcille—lay to have her son, and a large cross marks this holy spot.

You can also see, at Gartan Rath, the site of the monastery which Columba built here, and a Turas, or local pilgrimage route, leads you to Columcille’s Well and the ruins of a 16th century chapel built to honour the saint.

This is beautiful countryside and a real sense of holiness pervades this spot, and be reminded, too, that the faith we profess in Ireland and in Scotland goes back to very ancient roots indeed in this part of Donegal. How sad it is that many young people, whose roots also lie in Donegal, are walking away from that faith, and abandoning, too, an unbroken line of nearly 1500 years of Christianity that has been passed down to them

It’s at Gartan that the local Friel family carry on their ancient role as keepers of the Gartan Clay. Clay from a site, known only to the family, but close to Columcille’s birthplace, is said to carry special healing and protective qualities, thanks to coming from a spot made holy by the saint himself. This is indeed holy ground.

A living connection
What a visit to the Columcille Heritage Centre and its surroundings does, is to connect you with the early life and times of a saint who is still very much alive today, nearly 1500 years later, both at Gartan, in Derry and here in Scotland, too.

He was of noble birth, had that temper that so many Donegal men and men of Donegal ancestry, have, myself included—it must be clan kinship—and got himself booted out of Ireland to come to Iona, where his lasting influence is felt today.

Pilgrimage is back on the agenda, and what better way to connect with St Columba, than to make a short pilgrimage to the heritage centre that bears his name? It’s a place, like Iona, of reflection, heritage and prayer, with the spirit of St Columba, alias, Columcille, all around. This dove of Christ and of peace, but also a muscular Christian, who is reputed to have put even Nessie in her place, is my sort of saint!

For full details of the audit, which includes details of Gartan, Glencolumcille, Derry city and many other sites in counties Donegal and Derry, visit www.donegalcoco.ie or www.derrystradance.com