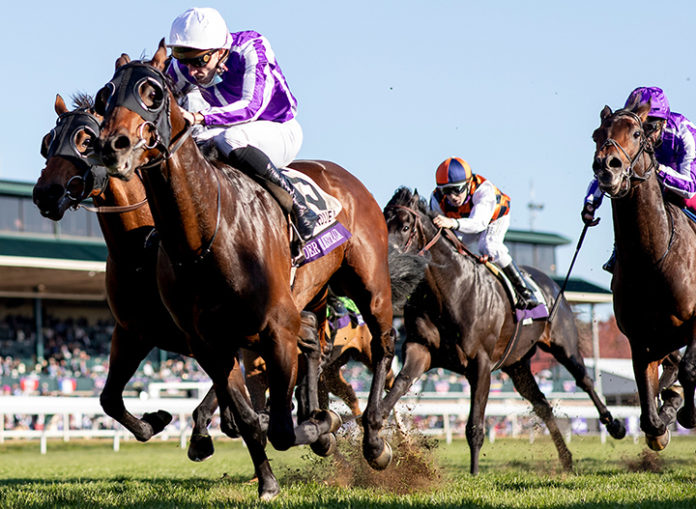 I MUST start this month’s column by saluting Aidan O’Brien’s success after he trained the first three home in the Breeder’s Cup Mile in Keeneland recently.

O’Brien had never won the Mile but put that right in spectacular fashion with the three-year-old Order of Australia (above) who won at a price of 73/1 on the Keeneland Tote. The horse only got into the race after the William Haggas-trained One Master was ruled out. He was the outsider of the three running for O’Brien beating Circus Maximus and Lope Y Fernandez.

It was the 13th winner at the Breeder’s Cup for the Master of Ballydoyle, whose unrelated predecessor, Vincent O’Brien, won the Mile with the Lester Piggott-ridden Academy in 1990. O’Brien also had the first three in the 2016 Arc with Found, Highland Reel and Order of St George. He has also had clean sweeps in the Irish Derby, 1000 Guineas, Irish Champion Stakes and Galway Plate. I doubt any trainer has won more top flight races than the perennial Irish Champion, who has won three Derbies in a row.

Keith’s success story
I was glad to see Keith Donoghue’s recent win on Storyteller at the recent Down Royal meeting for the Gigginstown trainer Gordon Elliott after a falling out at the same meeting seven years ago, when he was taken off of some of the mounts that he was due to ride.

The tirade of 2013 turned out to be a preview of the daredevil Donoghue was about to become. Take his body for instance, he is six feet tall. He was touching 13 stone when he watched Labaik win the 2017 Supreme Novices Hurdle, a day he describes as ‘the worst of his life.’ It wasn’t that he had given up when he temporarily retired from the sport, rather his body had. He tried to control his weight as it had gone up to 12 stone 3lbs, but he couldn’t seem to get on top of it. His body had just given up. As he said himself, he had ‘no energy or no will to do anything. I was gone. It meant that that I had no choice, my body wasn’t healthy anymore.’ However, Donoghue turned it around. He weighed 11 stone 1lb in a recent handicap at Clonmel. He runs 100km most weeks. He hasn’t just tested the boundaries of his body; he has beaten them. So well done to him and his winning ride on Storyteller, he deserved it.

Lookout for these horses
JP McManus set a new record when his latest buy, Jonbon, was sold to him for a record price of £570,000 at the recent Goffs UK November Sales. Jonbon is a brother to the great French horse Douvan. It looks like he will be trained by Nicky Henderson in England. Some other horses to look out for over the winter jumps are: Escaria Ten, Samcro, Wide Receiver and Envoi Allen, all trained by Gordon Elliott. A few more from Willie Mullins’ stable to look out for are: Ferny Hollow, Unexpected, Vis Ta Loi and a nice four-year-old called Rayapour in a maiden race over the hurdles.