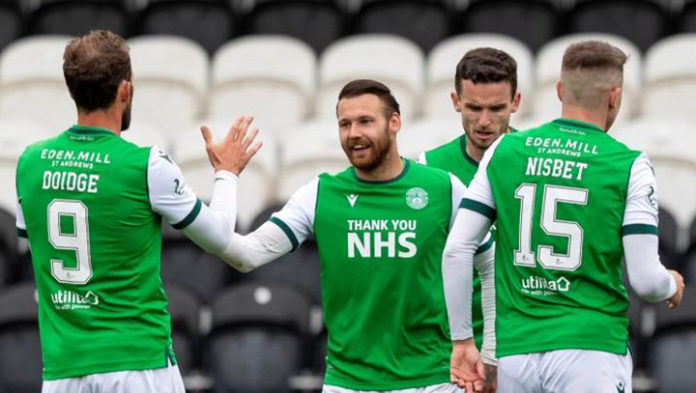 HIBERNIAN end September in third place in Scotland’s Premiership, after enjoying mixed fortunes in the three fixtures since the international break. Two defeats and two draws from nine league matches is an excellent first ‘season quarter’ total for Jack Ross’s new look side.

September 12 saw the Hibees rout St Mirren 3-0 in Paisley, with first half goals from Kevin Nisbet and Joe Newell and a clincher in the second 45 by the excellent Martin Boyle (above). St Mirren’s much publicised goalkeeping crisis in the end mattered little to that match’s outcome—the green jerseys would have won the match even if Lev Yashin or Joel Batts had somehow been cloned and put between the sticks for the buddies.

Next up, Edinburgh’s only top flight side took on Rangers at Easter Road. Hibs have struggled against the light blues over the last 18 months and that was a trend that needed to end. Jack Ross’s men drew a line under the team’s recent struggles against the Gers in a match which saw two recent records end—Hibs finally conceded goals from open play and Rangers’ ‘impregnable’ defence was twice breached. Drey ‘Dr Dre’ Wright gave the Easter Road side the lead after 22 minutes, finishing off a fine move by the team. Alfredo Morelos equalised for the visitors just before the break, showing that interest in him for Serie A and La Liga’s big boys hasn’t distracted the striker from his day-to-day game.

Scott Arfield scored to put the Gers 2-1 up on 57 minutes after great work from Hagi and some poor defending from Hibs. Ofir Marciano’s wonderful double save from Arfield later in the match would prove crucial, as would another fine save from a Ryan Kent effort. Hibs always looked dangerous going forward, though, and got their deserved reward with 19 minutes remaining, when Welsh hitman Christian Doidge nodded in a sweet cross from Martin Boyle. The match finished 2-2, with both sides having played well in what was a decent game of football. Ryan Porteous of Hibs was particularly excellent.

Of 49 league visits to Celtic Park in the last 30 years, Hibs have won just four—two under Alex Miller in 1992, once under Tony Mowbray in 2005 and a decade ago under John Hughes. 13 of those matches were drawn, so history wasn’t exactly on the side of Edinburgh’s green and white on their most recent trip to Celtic Park.

Hibs played fairly well in the first half and even had a few good half chances, without really testing Celtic’s goalie much. Josh Doig was substituted at half-time after having a very torrid time of things against Celtic’s Frimpong on the wing—akin to in the 1989 Scottish Cup semi-final between the sides, when Tommy McIntyre of Hibs was taken off after being led a merry dance by Celtic’s Steve Fulton. Doig—who has been otherwise excellent this season, will hopefully learn from the experience and become a better player for it.

In the second half Hibs offered virtually nothing in attack and in the end were lucky to only lose the match 0-3, with Marciano’s goalkeeping preventing a more embarrassing scoreline. The home side—is there such a thing in the Covid era?—were 2-0 up at half-time thanks to goals from Callum McGregor and Ajeti, while the coup de grace was delivered by Mohamed Elyounoussi in the second half. Be clear, though, Hibs were far from dreadful in this match, they simply weren’t a match for the champions man-for-man and as a team unit—no Scottish club is these days.

Ross’ men should see the Celtic defeat as a necessary object lesson and will hopefully use its disappointment to galvanise themselves for their upcoming Friday match against Hamilton at Easter Road, a match in which the Hibees will look to get back to winning ways and to continue their excellent start to the season. They battered St Mirren and fought Rangers to a standstill—there’s much good yet to come from the green jerseys.