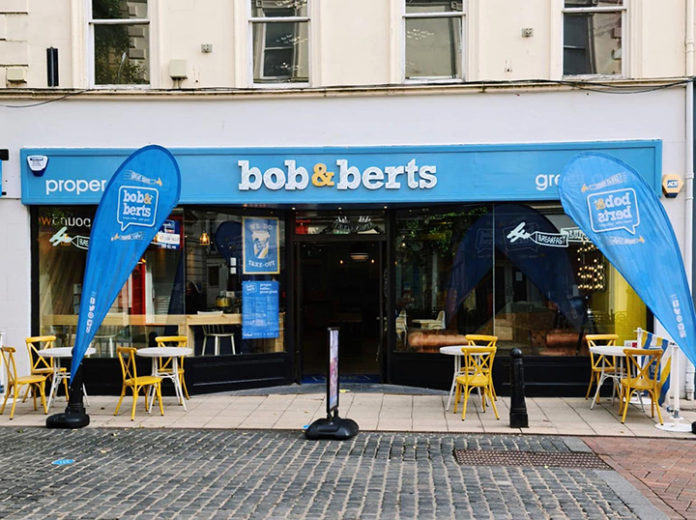 IRISH cafe chain Bob & Bert’s (above) are set to open their fifth outlet in Scotland, with plans for more already underway.

The Stirling cafe joins shops in Kirkcaldy, Falkirk, Dumfries and Dunfermline, and will open its doors this October following a delay to its launch caused by Covid-19.

It was originally due to open in April, but restrictions forced the unveiling back. It is expected that when it launches it will bring around 25 jobs to the area. A further shop in Ayr is also being planned.

“Being able to reopen our stores in Scotland was an extremely welcome moment,” said Colin McClean, who founded Bob & Berts with David Ferguson. “All sites are now fully operational with stores performing ahead of our expectations, which is really positive and shows people have missed what we offer.

“We’re now very much looking forward to the opening of our Stirling store and expanding our brand across Scotland. We see it is a key growth area and hope to open around six new stores over the next year across Scotland with a focus on market towns to retain our local community feel.”

Bob & Bert’s, which was founded in Portstewart, began its expansion into Scotland to years ago following a £2 million investment by the Business Growth Fund. From that Portstewart outlet it now has over 20 stores across Scotland and Ireland, and despite the Covid-19 restrictions the company’s growth has continued.

“Lockdown has given us confidence that we can deliver a takeaway service and we have seen the success of our app,” Mr Ferguson said. “We know there may be more twists and turns because of coronavirus but we’re committed to delivering a great service in safe environments for our staff and customers.”

The planned outlet in Ayr is just one of six more being targeted in Scotland.