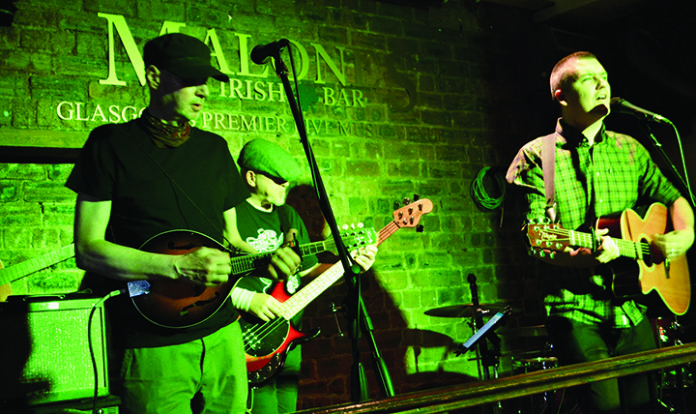 BOOLAVOGUE became the latest band in Scotland’s Irish music scene to add to that rich musical output as they launched their new album, Fanfare for the Green, this month at Malones Irish Bar in Glasgow.

The event, held in the popular city centre pub, saw the band—which is fronted by Kevin Smith and Seán Lyons—play the album in its entirety in front of a packed crowd who were entertained by the seven excellent and freshly arranged cover versions that appear on the album, alongside the four original songs, one of which, We Are Building It, has been adopted as the official song of the An Gorta Mór memorial campaign.

“We have 11 tracks on the album, seven covers and four original songs,” Kevin said. “ With the covers we tried to make them a little bit different from the usual songs, to make it a little bit unique. So there’s a few older songs on there.”

“We changed the arrangement on them,” Sean added. “Just to make them a little more upbeat. Sean Treacey, that was like an old waltz type of song and we gave it a little more of a Pogues-style rhythm.”

“We’ve already had pre-orders from Australia and the US, so that’s been encouraging,” Kevin said. “It sounds really good, we’re really happy with it. We hope people enjoy listening to it, because we enjoyed making it.”