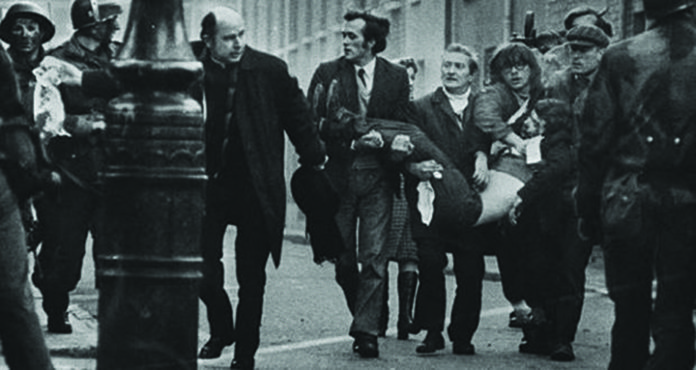 When it was announced by the British Prosecution Service that—originally—only one former British soldier would be charged with the killings of civil rights demonstrators on Bloody Sunday in Derry in 1972 the bereaved families responded with great restraint and dignity by describing it as a ‘terrible disappointment’ and a feeling of being ‘let down’ by the judicial system.

Bloody Sunday
Bloody Sunday was a massacre of Irish civilians by the elite British Parachute Regiment—an atrocity that continues to be felt today. On January 30, 1972, a civil rights march took place in Derry. About 15,000 protestors marching for an end to discrimination against Catholics made their way from the Creggan towards the city centre. The march was declared illegal by the Unionist Government and the British Army was mobilised to block it from reaching its destination, redirecting it towards the Free Derry Corner in the Bogside. Sporadic, but minor, rioting at the edges of the march took place and the army moved in to make arrests. Initially stones were met with rubber bullets, tear gas and water cannon. Then the paratroopers began to open fire, shooting and killing 13 protestors. Another man—passer-by John Johnson—was shot twice and died later of an inoperable tumour making him the 14th victim. According to army evidence 21 soldiers fired their weapons, discharging 108 live rounds between them.

Campaign for Truth and Justice
It has taken 47 years for the Public Prosecution Service to conclude that Soldier F would face murder charges for the killings of two people—James Wray, aged 22, who was shot in the back as he fled and was shot a second time while on the ground and William McKinney, aged 27, also shot in the back.

That the campaign for justice got this far is testament to the courage and persistence of the families who have always argued that the killings were unjustified and challenged the official line of the British Government that the soldiers were fired upon first and only shot at armed protestors. People like John Kelly whose teenage brother Michael was killed on the day.

Their journey for truth and justice has been a long one. It began when the Widgery Tribunal Report into Bloody Sunday was published, which claimed that the British soldiers were fired on first and that some of those killed had been armed. This was fiercely refuted by the families and their communities. It was a whitewash, a calculated attempt by the British establishment to win the propaganda war by blackening the names and characters of the protestors. The sight of the priest waving a bloodied handkerchief as he helped bring wounded civilians to safety was published worldwide and brought a lot of negative attention on Ted Heath’s Government and Widgery was its response.

Widgery became the official account of Bloody Sunday and successive British Governments refused to countenance reopening the files to establish the truth. It was only the election of Tony Blair as Prime Minister that the families succeeded in having a fresh look at the killings. The subsequent Saville Inquiry in 2010 stated that none of the casualties were posing a threat of causing death or serious injury and that the soldiers had lost control. The Prime Minister at the time David Cameron apologised for Bloody Sunday in Westminster saying that the killings were ‘unjustified and unjustifiable.’ Saville singled out Soldier F stating that there was ‘no doubt’ Soldier F had fired into unarmed protestors.

While initially deflated by the PPS’s original decision to prosecute just one soldier, the families described the announcement as a further step on the road to justice.

Soldier F
Soldier F reportedly joined the Parachute Regiment in 1966 and was considered an experienced soldier in 1972 when he took part in Bloody Sunday. Initially he claimed, under anonymity, to have fired 13 rounds during the Saville Inquiry, but later changed his testimony to say how few memories he had of that day, despite it being his first time in Derry. Has Soldier F committed perjury?

Response
The response from the current British Government upon hearing that Soldier F was to be charged with murder shows a similar degree of contempt when it comes to Irish lives as Ted Heath’s Government did in the immediate aftermath of Bloody Sunday.

The British defence minister Gavin Williamson declared: “We are indebted to those soldiers who served with courage and distinction to bring peace to Northern Ireland. The welfare of our former service personnel is of the utmost importance and we will offer full legal and pastoral support to the individual affected by today’s decision. This includes funding all his legal costs and providing welfare support.”

He made no mention of those killed or their families. He went on to say that the Government would act to reform the system to prevent soldiers from living in fear of prosecution. This intervention is being challenged by solicitors acting for the family of 19-year-old victim, William Nash, who have contacted the Attorney General arguing that these comments may have prejudiced the trial and may amount to contempt of court.

Lieutenant Colonel Derek Wilford, the commander on the day who now lives in Belgium claimed that Soldier F was being scapegoated and several senior military figures also reacted with fury at the decision, arguing that the soldiers feared for their lives and thus fired. Their attitude about being confronted by these rebellious Irish and having to account for their actions belies an arrogance at the heart of the British establishment when it comes to all matters Irish.

Before pitying the soldiers it is worth looking at the facts of the situation. Their claims of scapegoating and unfair treatment do not stand up to scrutiny. The anti-sectarian, human rights group, the Pat Finucane Centre points out that just four British soldiers have been convicted of murders relating to the conflict and all ultimately received royal pardons and were allowed to re-join their regiments whereas an estimated 20,000 to 30,000 former Republican and Loyalist paramilitaries served time for a series of offences including murder. Of those British soldiers successfully convicted of murder in connection with the conflict none has ever served more than three years in prison.

Do Irish lives matter less?
While you can count the dead and injured on Bloody Sunday no-one can count the cost of the atrocity for the Nationalist and Catholic community in the North of Ireland. For many it was evidence that the state would always be an instrument of British and Protestant oppression and that physical force was the only way to confront this. Indeed Eamonn McCann, author of War and an Irish Town recounted how, after the atrocity people queued to join the IRA and how it killed off any attempts to build a cross-community civil rights movement.

It took decades to end the violence and the hard won Peace Process is maintaining a peace of sorts in the North, but decisions like these and more importantly the attitude of the British Government suggests that Irish lives matter less than British interests.

While it is a positive development that somebody is going to face prosecution it is an outrage that, initially, just one individual was to be held to account for a massacre that fuelled the cycle of violence that ruined the lives of so many people in Ireland.