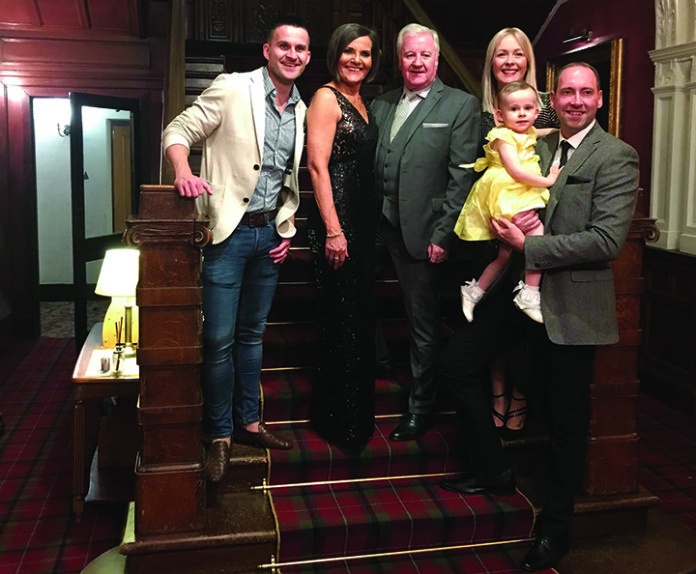 FAMILY, friends and former students turned out in force recently to pay tribute to Irish dance teacher, Owen McAuley on his retirement.

A retirement party was held at Sherbrooke Castle, which featured music, dancing and speeches—not least from Owen himself—as he brought the curtain down on more than four decades of Irish dance teaching.

“I started dancing with the late Charlie Kelly TCRG who died at a young age,” Owen explained. “Neil O’Donnell then took over for a while, but his career had him working away from home. Theresa O’Connor took over for a while so our 12-hand could have one more world championship under the Kelly name.”

Owen’s dance team finished third three times at the World Irish Dancing Championships, but it was his teaching career that he would come to be known for here in Scotland and further afield. He began teaching with Frances Teece in 1977, after she had asked him to help with her senior team. This was the beginning of his teaching career, which spanned 42 years. He then taught with Sally Flood and the Setanta School of Irish Dance before joining up with Michelle Haughey, most recently as part of the Rinceoirí le Chéile School based out of Penicuik.

“We really clicked well and for this reason alone I lasted as long as I did,” Owen said. “At my retirement party, a lot of former pupils attended along with fellow Kelly dancers and there was quite an interesting photo gallery! It was a really great night.

“I’ve always had great support from my wife Margaret all through my teaching days and have to mention my two sons, Denis and Owen Joe, who both toured the world with Lord of the Dance, which made us very proud. I will still be adjudicating and will continue to be a grade examiner. But for now, it’s time for me to enjoy our precious grandchildren, Sami in Dublin and Emma in Glasgow.

“There have been many highlights in my teaching career, but they’re not necessarily related to winning things. When you have dancers that give more than you thought they were capable of, that is a highlight for me. I will miss the teachers, dancers and parents in Penicuik who have been like family to me.

“I would like to thank everyone who attended my party and wish the dancers in Penicuik and down south who are part of Rinceoiri le Chéile all the very best for the future. With Michelle, Judith, Erin, Laura, Colleen and Declan the future looks as good as the past.”