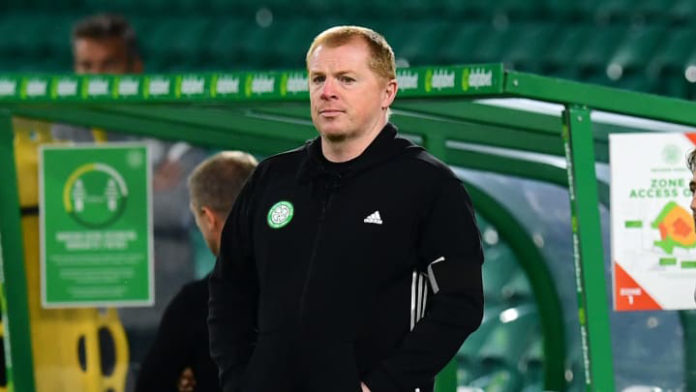 CELTIC’S attempt to make history with their assault on a tenth consecutive Scottish League Championship has got off to a stuttering start given a month of poor form and delayed matches.

The delay in matches was the result of Boli Bolingoli Mbombo’s knuckle-headed decision to travel to Spain and break quarantine—even playing in Celtic’s lacklustre draw away to Kilmarnock without having disclosed his travels—but others have come in to take some of the heat from supporters following the exit from the Champions League at the hands of Ferencvaros.

Costly exit
The Hungarians dumped Celtic out of qualification after a profligate and careless performance from the home side. The absence of a striker in the squad has also raised many questions among supporters.

With millions of pounds of talent sitting on the bench in the form of Albian Ajeti and Patryk Klimala, manager Neil Lennon (above) elected to play Ryan Christie in the role, and though Christie tried gamely and even found the net to level the match at 1-1 before the visitors got their winner, it summed up the weakness of Celtic without the firepower and focus of Odsonne Édouard.

Speaking after the match, the Irishman took responsibility for the team selection, and added that match fitness was the issue that prevented the presence of a striker, but also opened a can of worms by noting that there are players in the squad who do not want to be at Celtic.

“We have to do better,” he said. “Get your mentality right, get your attitude right. If some of you don’t want to be here, leave. Let us work with players who want to be here.

“The players need to buckle up. They’ve been OK but some of their attitudes need to be better if they want to come and play for the club. I’m detecting a little bit of a malaise among them where sometimes they’re not as good as they think they are.

“I’m devastated. That shouldn’t happen. We all have to take responsibility, certainly I do for the team selection but we had enough chances to win that game twice over.”

The issue of team selection and strikers is nothing new this term, however, with many Celtic fans bemoaning the use of a single striker in contrast to the two up front Lennon employed in the latter half of last season.

That change in style saw Celtic sweep all before them and put together the run of form that got them over the line in a truncated season.

If a tenth league title is to follow the ninth it is likely that a similar run of form will be required, and following a European failure and low scoring league matches as a recent form guide it is vital that Celtic settle on a formation which will bring goals.

The current emotions will be nothing new for fans, many of whom could almost have predicted that a season of such magnitude would be affected by such an array of difficulties at exactly the point when Celtic should be laying the foundations of a strong season.

New signings
However, despite many feeling that such chaotic moments are in the DNA of the club—just as the high drama and fairytale moments of victory are—there remains the hope that Celtic will steady the ship and click into gear in the most vital season of many supporters’ lives.

Speculation of the arrival of Irishman Shane Duffy from Brighton persist, giving hope of a new and steely toughness in defence, while the signing of David Turnbull should breathe fresh life into a midfield which looks subdued in recent matches.

Turnbull’s signing from Motherwell was cancelled last year following injury problems, but the young star of that team has finally put pen to paper with Celtic this summer to join the champions for a possibly historic season.

Speaking after his unveiling, he immediately made the winning of honours his priority, and it is to be hoped that with the entry of a player who really does want to be at Celtic and a light being shone on those well-paid and trusted players who are only reluctantly kicking a ball in the club’s colours that drive and energy may begin to return to the squad.

“It’d be brilliant to win silverware this season at Celtic,” Turnbull said. “I obviously grew up playing with Motherwell, and while we were involved in cup finals, there was maybe less of an expectation to get there.

“It’s the opposite at Celtic, so to be involved in big games, tournaments and cups would be an honour for me and my family. I can’t wait to do whatever I can to help Celtic win more trophies in this important season ahead.”

Supporters will hope that among the players it will be the attitude of the new arrival that prevails, and not the attitude identified by Neil Lennon.