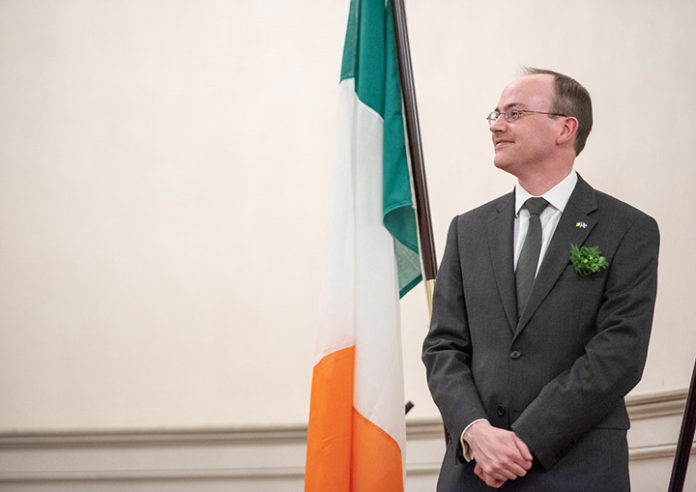 IN EARLY July—after more than three years in the role—I will conclude my assignment as Ireland’s Consul General in Scotland. It has been a real privilege to have had the opportunity to serve in this post, to represent Ireland’s interests here, to help drive forward the close relationship between Ireland and Scotland across so many different areas and at so many different levels, and to engage with the large and active Irish community which makes such an important contribution to Scottish life. It is in the nature of the job that you never spend more than a few short years in any post before moving elsewhere; but at a personal level I will miss Edinburgh and Scotland greatly.

The prospect of leaving prompts me to look back over a period that has been—for various different reasons—an eventful one for Scotland, for Britain, and for relationships with Ireland. I took up duty here in May 2016, and the following month of June saw a number of events that shaped the context for the work of the Consulate over the subsequent three years. The result of the UK’s referendum on EU membership on June 23 began a complex political process, many months of detailed UK-EU negotiation on withdrawal arrangements, and a period of uncertainty which has formed an unavoidable backdrop to the Scottish-Irish relationship during my time here. Brexit presents unprecedented political, economic and diplomatic challenges for Ireland, and will be a major factor in shaping our relationship with Britain and with Scotland for years to come.

Forging friendships
On a very different note, June 2016 also saw an important and historic visit to Scotland by the President of Ireland, Michael D Higgins. The warm reception President Higgins was afforded, both from the Irish in Scotland and from those with no Irish connections whatsoever, spoke volumes about the friendship between our two nations. Equally, the way in which the messages the President conveyed during his visit were received—in particular his major speech at the Scottish Parliament—illustrated the extent of the respect and esteem in Scotland for the President and for the nation he represents.

Those two momentous events in June 2016 should not entirely overshadow another important development that month—the formal launch at Edinburgh Castle of the Irish Business Network Scotland, now known as Causeway Ireland-Scotland Business Exchange. The event itself—which was attended by both Ireland’s Minister for Public Expenditure and Reform, Paschal Donohoe TD, and Scotland’s Cabinet Secretary for Culture, Tourism and External Relations, Fiona Hyslop MSP—illustrated well the support of both Irish and Scottish Governments for the initiative, and their real desire to invest in the Irish-Scottish economic relationship. The work of Causeway has made an indispensable contribution to the growth of that relationship over the past three years.

If I were to proceed at this pace and go through each of the events and developments which have served to shape the Irish-Scottish relationship over the last three years, I would have to vastly exceed the allocation of space that even the generous editors of The Irish Voice could reasonably be expected to give me. But I mention those events of June 2016 because they set the foundations for much of the subsequent work of the Consulate, and the Irish-Scottish relationship as I have known it has been shaped by them.

Memorable moments
There have, of course, been many other highlights and memorable moments of both symbolism and substance that stand out among my personal recollections. The image of the Kelpies in Falkirk illuminated in green to mark St Patrick’s Day in 2017, as part of Tourism Ireland’s Global Greening initiative. The ‘trilingual’ celebration of Bloomsday at the University of Glasgow in 2018 featuring the first translation—we think—of extracts from Joyce’s Ulysses into Scottish Gaelic. The inauguration of the Shieling for Deirdre and Naoise, high in the mountains of Argyll above Loch Etive, celebrating the ancient Irish-Scottish connections that stretch back from history into mythology. Visiting the extraordinary island of Iona, to see where St Colmcille focused the Gaelic civilisations of Ireland and Scotland into a powerful part of our broader European culture. Seeing Ireland and Scotland taking each other on in an intriguing merger of hurling and shinty in Inverness. And of course, if only once in the space of three years, witnessing an Irish victory over Scotland in the Six Nations at Murrayfield.

The Irish-Scottish relationship has never been stronger or more highly valued than it is today. At an economic level, bilateral trade and business investment is driving growth, and creating and sustaining jobs, in both countries. Over the past three years, the Consulate has welcomed three major Irish trade missions. These included the largest ever Irish trade mission to Scotland, in September 2018—which involved 56 Irish companies across seven business sectors—led by our Minister for Business, Enterprise and Innovation Heather Humphreys TD, and organised by Enterprise Ireland. A particularly welcome initiative too was the Irish trade mission to Scotland put together by four Chambers of Commerce from Counties Dublin and Kildare and by Údarás na Gaeltachta in April 2019, facilitated and supported on the Scottish side by West Lothian Chamber of Commerce and by Scottish Chambers. We are now looking ahead to another major Irish trade mission in September, and other new developments, such as the establishment of the Scottish-Irish Finance Initiative, offer the potential to strengthen our economic relationship even further.

All of this activity has brought us to a stage where Irish-Scottish trade has grown by 132 per cent over the last seven years. Some 330 Enterprise Ireland-backed companies are now operating in Scotland, and these companies alone are exporting more than €300 million worth of goods and services into the Scottish market every year. Overall, Ireland is the fourth-largest source of foreign direct investment into Scotland. More than 14,000 Irish people are working in Scottish industry.

Cultural connections
But of course the strength of the Irish-Scottish relationship relies on much more than economic ties, valuable as they are. Our common cultural heritage, and shared aspects of our contemporary culture, provide an immensely important foundation for our friendship and cooperation. It is a privilege to have had the opportunity to be here in Scotland through three seasons of the Edinburgh Festivals, to see the work of so many talented artists and performers from Ireland, and to work with Culture Ireland to help showcase the best of Irish artistic excellence. A symbol of the important part that Scotland plays in Ireland’s global cultural landscape was the fact that Culture Ireland’s major celebration of Irish arts in Britain, GB18, was formally inaugurated last year in Glasgow, with Ireland serving as the international partner country for the 25th anniversary of the Celtic Connections festival.

Aspects of Ireland’s traditional culture remain particularly vibrant in Scotland, thanks to the extraordinary and sustained work of organisations such as Conradh na Gaeilge, Comhaltas Ceoltóirí Éireann and the GAA. Celebration of Irish heritage and identity, in particular through the St Patrick’s Day Festival in Coatbridge now looking towards its 18th year, the Glasgow St Patrick’s Festival, and Edinburgh’s Festival of Ireland, are a reminder of how much Ireland means to people here. I take the view that one of the Consulate’s most valuable initiatives in recent years has been the organisation, in cooperation with Scotland GAA and Conradh na Gaeilge, of successive annual Edinburgh Irish Culture and Heritage Days to give families with Irish links, but also those with no Irish connection at all, an opportunity to sample, engage with and learn about aspects of Irish tradition.

People power
At its core, of course, the Irish-Scottish relationship is about people, and I will leave Scotland with a profound appreciation of how much we have contributed and continue to contribute to each other’s culture, society, community and civic life. And, indeed, with an appreciation of the real diversity of the Irish diaspora in Scotland, involving people of different interests, different beliefs, and different reasons for being here, drawn from a range of traditions but keen to acknowledge their part in a set of centuries-old Irish-Scottish connections, and to share in the identity of a global Irish nation.

And as the relationship is really about people, I would like my parting words to be words of thanks to everyone who has contributed over the years towards the deepening of Scottish-Irish ties, and to everyone who works so hard to keep Irish culture here so vibrant and to build new friendships between our communities. The work of the Consulate is, of course, only one element of that broad endeavour; but I know that my successor as Consul General, Jane McCulloch, can look forward to the same support in her work as I have received from friends of Ireland across Scotland. Go raibh maith agaibh go léir, agus guím gach rath oraibh don todchaí. Slán go fóill.