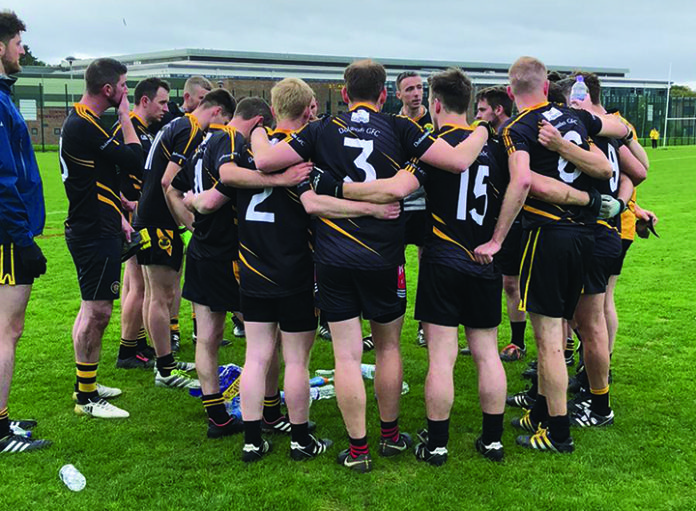 IT’S 29 years since the black and yellow jerseys of Dalriada Gaelic Football Club first graced the hallowed sod of Scotland’s GAA pitches. Founded by Irish immigrants to the northerly city of Dundee, the club is proudly approaching its 30-year anniversary.

The men and women who have been part of Dalriada in that time have worked tirelessly to make a club and community for those who are its members today. The club is delighted to have its founding member, Peter Mossey, as County Chairman.

Thirty years has seen many changes—especially the move of the club’s main base to Aberdeen. Thankfully, its Dundee roots are still alive and well with several key club members still based in Tayside, including the club’s tough tackling full-back, Shaun McBride.

“I got involved with Dalriada last year after moving to Dundee for University,” Shaun said. “After becoming involved with the Uni GAA team I was even approached to train with Dalriada, I headed to Laurencekirk and haven’t looked back since.

“The first training session was with the lads in Laurencekirk. I went up with a few of the other Dundee lads and was welcomed in straight away. The club is a great way to meet lads that are in the same position as yourself, living away from home and looking to play a bit of ball and build up a bit of a community’

However, Dalriada is not just a ‘boys club.’ Ladies football is alive and well in the north, with Dalriada ladies team flying the flag. The team compete across Scotland and the north of England. Aisling B is a long-time member of the Ladies team.

“I heard through friends that the people in club were really friendly,” Aisling said. “At the first training session, everyone was very welcoming and I felt like part of the team straight away”

Asked about who should get involved, Aisling says the club has an ‘open door’ policy.

“Yes, anybody thinking of moving to Aberdeen whether they have played before or not, there’s lots of different abilities on the team,” she enthused.

The club has not stopped at being at just being a hub for the Irish in the north of Scotland. It has done its part to spread the word of Gaelic football to its adoptive country. Ailsa Munro joined the club after meeting some of the Dalriada ladies team at tag rugby.

“I went along to my first training session without having a clue what Gaelic football was,” Ailsa said. “I remember thinking what a bizarre sport it was, but it takes everything I enjoy about other sports into one. Everyone was very patient and willing to answer my stupid questions! It was such great fun that I kept going back.”

Every member will tell stories of the good and bad times playing with the club, but the spirit in the club is always there to support one another. Ailsa is on the road back following a tough injury.

“When I tore my 2nd ACL playing another sport, I couldn’t play or train for two years,” she said. “The socials kept me going though and now I’m back training for my comeback.”

Even after that long road back, Ailsa would do it all again.

“Yes, everyone is welcome whether you have played before or not,” she added. “Dalriada is a great club to join to improve fitness, have fun training sessions and the best socials. And, luckily for me, you don’t have to be Irish to be part of it.”

The club has just come off the back of a very good year. Shaun remininises about those moments of ecstasy and agony.

“The best moment was the winning of the league in Coatbridge, but the hardest moment was definitely the last-minute loss to Gaels in the championship final,” he said.

In spite of that tough last-minute loss, the club spirit kept rolling along. When asked about the best moments of the year, Aisling says without hesitation: “The bus trip back from the boys’ final with the singsongs”

As the 30 year milestone, the club and the community it has created look forward to the future. The club will continue to be a hub for the diaspora in the north of Scotland, as well as welcoming to anyone who wants to take on an exciting new adventure. Here’s to the next 30!

Dalriada GFC are currently recruiting for new players for the coming season. If you’re interested in joining, get in touch via Twitter: @DalriadaGFC, via Facebook: http://www.facebook.com/dalriadagaelicfootballclub or by e-mail: dalriadagfc@hotmail.com