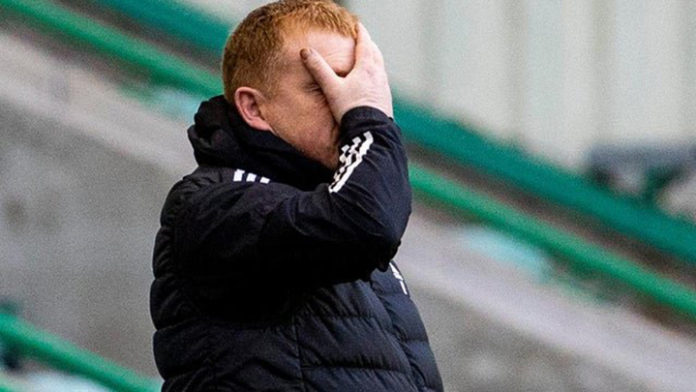 CELTIC’S defeat at Ibrox was the latest in a series of sabotages carried out by the players and staff of the club in a season which has transformed from an opportunity for iconic achievements into a ritual act of self-destruction.

So much had gone right in the match that it should have been obvious to anyone of a green persuasion observing it that self-inflicted catastrophe was just around the corner, and so it proved.

Having pinned back their opponents and made light work of their much-vaunted and supposedly all-conquering line-up in the first half, and started the second period in much the same fashion, Celtic blew it with an idiotic challenge on Alfredo Morelos by Nir Bitton.

The red card which was immediately flashed at the Israeli signalled the end of any hopes Celtic had in the game, and left their candle in this momentous season flickering even more wildly than before. That it hasn’t fully gone out is only because their challengers this season were demonstrated to be more than beatable, and little to do with anything Celtic have shown.

Application denied
Supporters are right to be outraged at the way the fruits of their backing have been used this season. Many millions of pounds were poured into the club by supporters for the right to take part in an activity which they are prevented from doing. It was a donation and nothing more—a recognition of the efforts that have gone into reaching this point and the importance of the club’s financial security, but most relevantly the financial injection was to arm Celtic to win their tenth league title in a row.

What has followed has been a dismal wake-up call to those supporters who were dreaming of glory, a wake-up call that has been delivered by those who have diverted the hard-earned cash of Celtic fans, via the club, into their own pockets.

That those same footballers were then airlifted to the relative freedom and sunshine of Dubai in the immediate aftermath of their capitulation, with carefree images of pints being slurped at the poolside finding their way back home, will stick in the craw even more.

Ordinary supporters who have been denied the joy of a summer holiday or cool pint by restrictions have looked to Celtic as the one thing that can uplift them this year above all others. Not to see Celtic winning every match, or even to see Celtic cruising their way to a tenth league title—simply to see their representatives in the jersey apply themselves in the way a Celtic player must do. Having been denied that application, they have then had their noses rubbed in it by the Dubai trip.

Broken bond and bewilderment
The deal for these players appears to be: you pay the money, we benefit from it. It is a corruption of Martin O’Neill’s maxim on the game—that it is about those who pay and those who play. Players and supporters have an unofficial contract that supersedes their official one, and this season Celtic’s players and staff have forgotten their end of the bargain. Yes, supporters pay, but to be deserving of that money the players must play, and the pathetic track record of the Celtic squad in this season is a clear demonstration of a broken bond.

It is bewildering that such things can be said about Celtic players in a year in which they secured a quadruple treble, but to say anything else is to deny reality. Time and again they have abandoned the attempt at success to wallow instead in anxiety and self-pity. Leads have been surrendered cheaply, appalling acts of judgement made in the heat of battle and confidence utterly diminished under the slightest pressure.

Even in the historic cup final win against Championship side Hearts, Celtic repeatedly handed back their advantage and went to the lottery of a penalty shoot-out before they got over the the line. That they did means the club and supporters can hold up an achievement it is unlikely Scottish football will ever see again, and should the time come for any other club in Scotland to climb the podium at season’s end Celtic fans will have the easy retort that such achievements are well and good, but they would have to be done as part of a true and imperious domination in order to impress them.

That achievement has shown that Celtic can still find new ways to know greatness, but the newest thing about Celtic now—as we saw from the showing at Ibrox—seems to be the way in which players in the Hoops can seek out defeat and disappointment. To avoid the type of anger that can turn a poor season into a lengthy disruption for a club’s fortunes, those players will need to hope that their jaunt to Dubai, and the devastating fallout from it, has somehow refreshed their memories about what it means to be playing for Celtic.