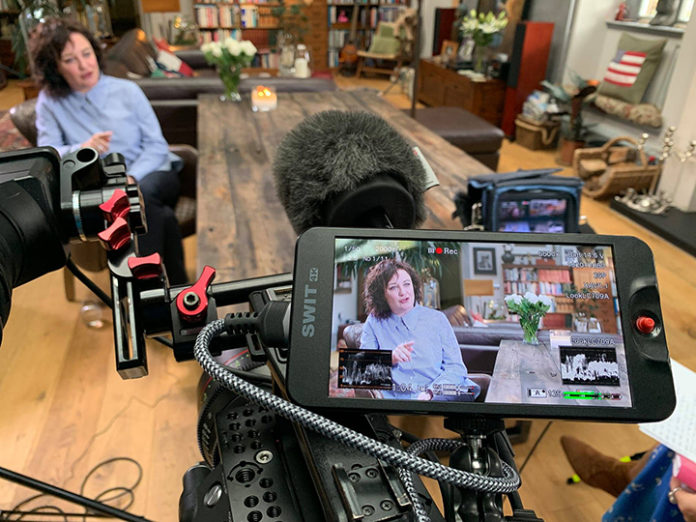 A FRESH light has been shone on some of Scotland’s most iconic female musicians thanks to award-winning, Donegal-born, documentary maker, Helena Gallagher and her newest programme God Save The Quine.

Over the past four months Helena’s HG Productions have been busy making an exciting documentary for MG ALBA, where they met with and spoke to the likes of: Barbara Dickson, Annie Lennox, Sharleen Spiteri, Eddi Reader, Lorraine McIntosh (above), KT Tunstall, Amy MacDonald, Emma Pollock, Lauren Mayberry, Be Charlotte, Clare Grogan and Kitti.

In the course of the programme, presenter Fiona MacKenzie explores the journeys travelled by these revered female musicians and discovers just how hard the struggle was, and is, to have their voices heard in what is still a very male-dominated world.

Barbara Dickson recounts the transition from folk hero to pop star and the rise to fame that followed, while international megastar Annie Lennox talks about life on the road and reflects on the pressures and challenges behind her incredible career.

1980s pop heroes Clare Grogan and Lorraine McIntosh speak about the excitement and thrill of life as a music star and reflect on this great period and the pressures of maintaining image and style. Sharleen Spiteri also describes her rise to stardom throughout the 1990s.

Scotland’s female bard, Eddi Reader recalls her fascinating career, KT Tunstall describes her path to fame and Amy MacDonald considers the image pressures that face women as they try to break into the music industry. While Emma Pollock shows just what it takes no to conform and run your own label while surrounded by the powerful major record companies. Chvrches’ Lauren Mayberry reveals the challenges of working in the current musical landscape of streaming and social media where women are often unfairly put under the microscope.

Helena—who has had great success in the past with shows like Bus Ghlaschú, which documented the travels of people between Scotland and Donegal from the 1960s to the present day—was extremely pleased with her most recent programme.

“God Save The Quine reveals life as a woman in the music industry, considering the extra pressures that they felt to not only sound the right way, but to also look and dress a certain way,” she explained. “They talk about everything from their early days of starting out, first gigs, joining bands, record deals, struggles, juggling life at home, including their role as a mother, with life on the road and managing global success and consider if things have changed today.

“God Save The Quine rightly celebrates the spirit and attitude of these strong women who have overcome adversity on the road to success. With tales across the decades, this upbeat documentary examines the shared experiences they all have in common and reflects on their collective battle to be heard.

“Hopefully the programme will get another airing. The feedback has been amazing so I’m really happy. It was particularly interesting to get to know Kitti, whose father is from Ardara in Donegal. She has an amazing voice and is going to be massive.

The show—which is In Gaelic with English subtitles—was first broadcast on BBC ALBA at the beginning of January and is available on BBC iPlayer throughout the month.