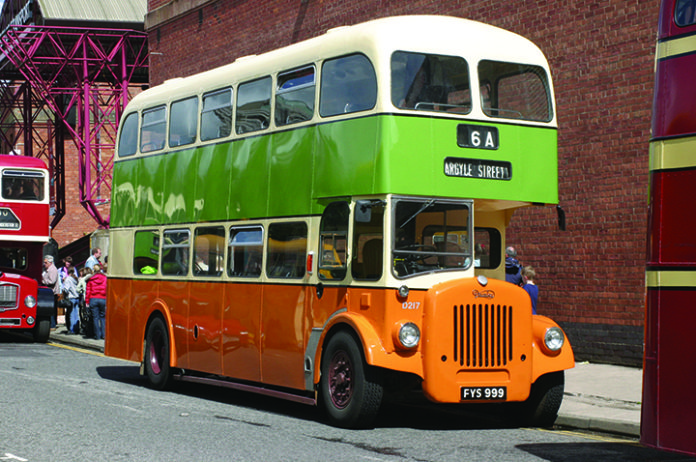 CONTRIBUTOR to The Irish Voice, Hugh Dougherty, wants to hear from members of the Glasgow Irish community whose grandparents or parents worked on the Glasgow Corporation Transport trams, trolleybuses (above), buses and subway, during the 1940s, 1950s and 1960s.

Hugh says that many Irish people found work as conductors, conductresses and drivers as the corporation did not, like many employers of the time, discriminate against Irish people and Catholics. The result is that Glasgow Corporation Transport gave the Irish community a source of decently-paid work with good conditions and, in many ways, helped lay the foundations of the post -war Glasgow Irish community.

“The trolleybuses, in particular, attracted plenty of Donegal staff, as Hampden Garage was close to Gorbals and Govanhill,” Hugh said. “It became known as a ‘left-footed’ depot among staff. That had a double meaning, as trolleybuses had their accelerator on the left, rather than on the right as on a conventional bus. GCT staff also wore green uniforms and the vehicles themselves were painted green, white and orange, so it’s no wonder that Irish crews felt right at home!”

Hugh believes that there is an untold story to record and publish and that this experience of Irish immigrants of the day should be recorded.

“We hear, rightly, plenty about the Windrush Generation recruits to London Transport, for example, but little about recruits from Donegal and elsewhere in Ireland, who kept the wheels rolling on Glasgow’s public transport.”

Records show that some Irish employees worked for a short period before either returning to Ireland or leaving for another job, but many others stayed, some gaining promotions, and it was the security of the job that allowed them to establish homes and families in Glasgow, many of their children going on into the professions.

“There’s no doubt that GCT employment provided a platform for the Irish community to progress, and that’s why we need to study it and record the experience,” he continued. “Clearly, if there are any tram, trolley, bus or subway crews still alive, it would be good to hear from them as well as from the children and grandchildren of crews.”