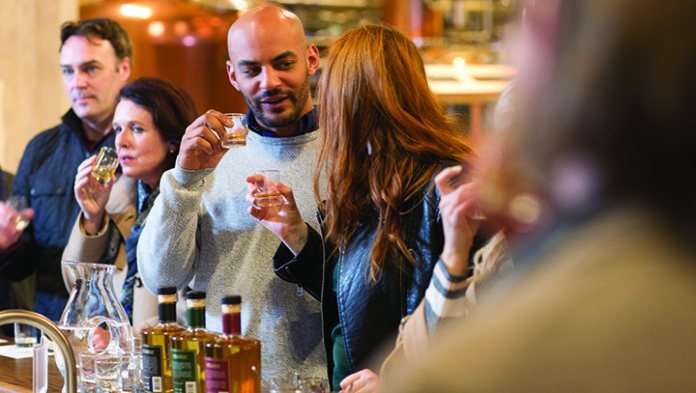 Opened in late 2017, it has quickly made its mark on the city’s tourist trail. As well as its whiskey story it offers fascinating insights into the life and times of Dublin’s Liberties, now a dynamic district of the city. With £22 million investment the Pearse Lyons Distillery is making a significant economic contribution to the Dublin’s Liberties.

“I like to describe our experience as 50 per cent history and 50 percent whiskey,” general manager, Tracey Flinter, said. “If you are a history enthusiast or a whiskey connoisseur, you’ll be sure to enjoy Pearse Lyons Distillery.

“The distillery and visitor centre allow us to showcase the new, vibrant life of the Liberties in Dublin while combining our own distinctive history with the stories of the area’s culture and fascinating past.”

For Kentucky-based Pearse Lyons and his wife Deirdre, the four-year renovation and restoration project was a labour of love. When the distillery and visitor centre opened in 2017, Deirdre’s artistic vision and their determination to restore the church authentically were evident in every aspect of the experience. The Dublin-born couple had done their city proud.

Stories to tell
Nestled in the former Church of St James, the distillery has a colourful history dating back to the 12th Century. In the graveyard, tales of compelling characters the city’s famous distilling and brewing district are told by a seanachai (Irish storyteller) in homage to the ancient Irish tradition of storytelling.

As the tour proceeds, the history of The Liberties unfolds. Originally medieval districts with their own jurisdiction, over time they became a new area, bustling with business. It was known for its boots, brews and biscuits. 500 people worked at Winstanley Boots supplying boots to right across the British Empire. It was home too, to Jacob and Jacob’s cream crackers.

As for brews, it was here in the Golden Triangle where Roe’s, Jameson’s and Power’s—three of the biggest distilleries of the 19th Century—operated. The Liberties was known as a place of yells, smells and bells due to its street traders, breweries and distilleries, and the sounds of bells ringing throughout the district from the large number of churches.

The trades supporting this industry, such as coopers—the craftsmen who built the oak barrels where whiskey is stored —are honoured in the design of the stained-glass windows at Pearse Lyons Distillery. Copper stills are the traditional way of distilling whiskey in Ireland.

It was these stills that helped Irish whiskey become the most popular in the world. However, competition from Scotland with cheaper and quicker production methods, political boycotts following the War of Independence, social movements, such as the temperance movement, and prohibition in the USA led to a decline in Irish whiskey sales. Until the 21st Century, that is, when we witnessing a remarkable revival of Irish whiskey and the Golden Triangle.

Family history
The Lyons’ family history is recognised around the distillery and graveyard. Mighty Molly and Little Lizzie, the two small-batch copper stills imported from Kentucky are named after distant family relatives. Standing proudly, illuminated by the amber glow from the stained glass windows in the sanctuary of St James’, they are proud testament to the ancient craft, their unique design responsible for the special character of their whiskey.

The former church, which is now the distillery, was named after St James the Great—the inspiration for one most famous medieval pilgrimages in the world, El Camino de Santiago de Compostela. The site and the incredible archaeologies which have been uncovered gives a great insight into what life would have been like in Dublin during the 16th, 17th, 18th centuries and even during medieval times.

Archaeologists uncovered more than 200 intact burials and the same again of disarticulated bones. They also found a gold colonial Spanish 17th century escudo coin. This was minted in South America, in Colombia in the Bogota mints. Its provenance is unknown, but it is treasured as a association with Spain and St James, although perhaps it belonged to a wealthy parishioner who was involved in piracy. The records indicate that there are more than 100,000 burials at St James’ graveyard, which is almost unbelievable for such a small site.

One of Pearse’s first memories was, as a four year old child, being brought to a funeral and seeing a man laid out. Years later when he was older he was told it was his grandfather, John Hubert Lyons. When renovations began Pearse discovered that his grandfather was buried in James’ Street Cemetery, as were nine of his relatives.

A new era
Modern times were not kind to the building until the Lyons’ acquisition. The iconic spire was taken down after a lightning strike and, after the church’s closure and de-consecration in 1960, it fell into disrepair, and was used for a time as a warehouse and shop.

The new spire, referred to as the Liberties Lantern, is bold, contemporary and made of glass. The ancient and the modern coexist in symbiotic glory.

The tour offers a sensory experience for the visitor as they journey through the distilling process, before enjoying a whiskey tasting at the tasting bar (above left). As well as this tour, blending experiences with the head distiller or a whiskey and food pairing experience with local seasonal produce are on offer.

“Our first 17 months in business have shown us the true potential of our unique tourism offering,” Ms Flinter said. “Our storytellers are passionate, experienced and knowledgeable in the history of the site and all things whiskey, and we pride ourselves on offering small, personable tours in a working distillery,”

The Lyons’ dream to have a whiskey distillery in Dublin was fulfilled only months before Pearse’s unexpected death. As a scientist and entrepreneur he has a vast legacy, none greater than the distillery that bears his name.