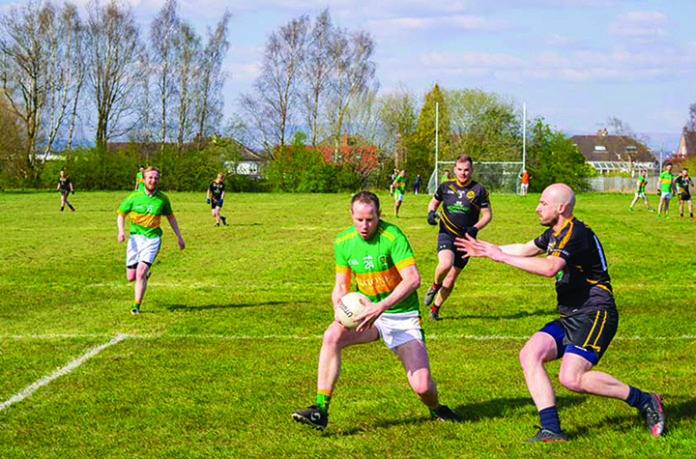 GLASGOW Gaels made the long journey to Liverpool as they took on John Mitchels in the Senior North of Britain League, and the men in red were rewarded for their trek with a positive result after a well-drilled showing.

It was Gaels’ second visit to Liverpool in two years, and in a physical encounter at Greenbank the visitors recorded a strong five-point victory.

Racing into a two point, they had Ian Ferrick and David Comesky to thank with points that were almost a facsimile of one another, before a point from the home side required a fantastic score from Conor Woods to restore their two point advantage.

Teamwork was the key for Gaels, and captain Comesky was making his side tick. He popped over his second of the day after a well-worked team move and Gaels were already scenting the victory that was to follow.

Adrian Dawson then made his first contribution of the day with two scores of his own, one of the Tipperaryman’s coming from a free. With further scores from Richard Stevenson and Comesky leaving the scores at the break 0-05 to 0-03 in Gaels’ favour the visitors were able to breathe easily at half time.

It didn’t go all Gaels’ way in the second period though, as Mitchels began to improve and the free-flowing Gaels found scores harder to come by. Stevenson again notched, this time from a free, but Mitchels were beginning to chip away at the defecit. Michael Molly and Padraig Slane were doing damage for the home side, but just as it looked like a comeback may have been mounted Woods found the net for Gaels. This cushion was enough to secure the points, with late scores from Paul Duffy and another from Stevenson settling the game once and for all, the final score standing at John Mitchels 0-09 Glasgow Gaels 1-11.

It wasn’t to go Gaels’ way in the junior competition though, with Dunedin Connollys putting them to the sword at Granton Road. Just as at senior there is a strong competitive rivalry between the two clubs at this level, and the match promised to be an interesting clash.

In the event it was a comfortable afternoon for Connollys as the Dunedin men cruised to a 3-08 to 1-05 victory on a wet and misty day.

Dalriada were down in Glasgow to take on Tír Conaíll Harps at their new home in Cambuslang and may have been hopeful of a victory on the road, but Harps (above) showed plenty dedication to start life at their ground on the right note.

There had been intensive preparation to get the playing surface ready for the match, and that same determination was in evidence on the field. The victory showed that Tír Conaíll’s adjustment to life at junior level as they work on and off the field to reinvigorate the club in its 25th year is likely to be a daunting prospect for the other sides.

Sands MacSwineys also saw action this month as they travelled to Clydebank for their first match on the new facility there, where tested their youth and enthusiasm against a Glasgow Gaels side who knew their way around the latter stages of the junior competition only too well.