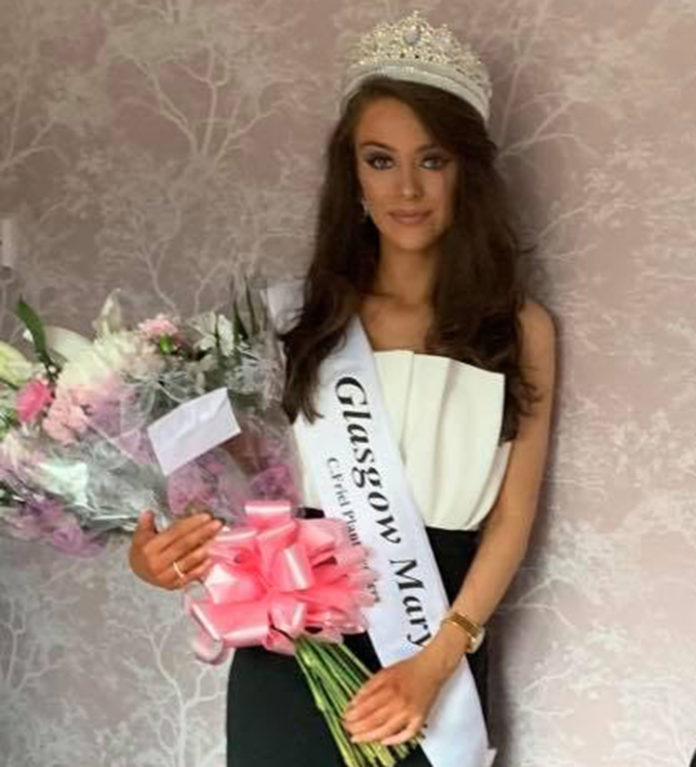 Traditionally, the Glasgow Mary is crowned at The Merchant City St Patrick’s Day Festival. However, due to this event being postponed in response to Scottish Government guidance relating to the current health crisis this was not possible. The day was saved by Celtic Music Radio who were hosting a radio marathon to ensure that music and song continued to fill what would have been a great family day. This included inviting Angela to announce the city’s Mary live and have the news of her crowning broadcast across the airwaves.

Ellenor is an 18-year-old student from Glasgow’s south side, she is a keen Irish dancer whose heart also lies in theatre and the arts. Her connections are imbedded in the wonderful Donegal peninsula—the beautiful Inishowen. Ellenor has always been part of the Glasgow Irish and regularly attends Irish events with her friends and family.

After hearing news of her selection, she said that she was ‘thrilled to have been selected’ and ‘very keen to promote the festival on her home soil prior to representing Glasgow in Dungloe.’

Ellenor recalls growing up and the anticipation of who would be ‘the Mary’ and stated that ‘it is a pleasure and a privilege to wear the sash,’ and added that she intends to make up for lost time as soon as possible and endeavour to attend local bars and events to give the Irish community the chance to meet her before she heads over the water this summer.

The selection committee wished to place on record its gratitude to Celtic Music Radio, who amid the sadness of the St Patrick’s Festival postponements warmly welcomed them to announce this years winner live.

“Our sincere gratitude to all who took the time to enter,” the selection committee added “To Roisin Cassidy our fabulous ambassador and to Maurice Friel, who has continued to supporter our community.”