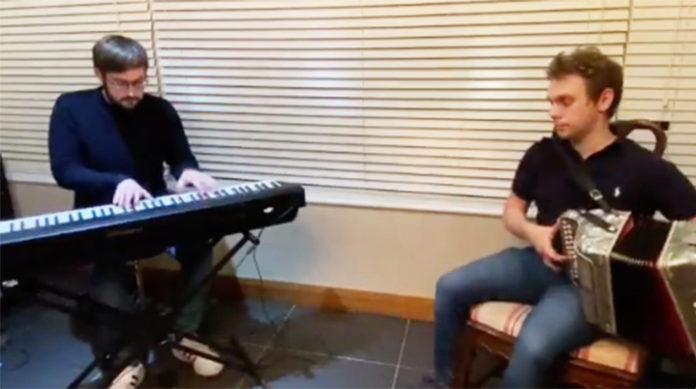 IN RECENT times, the ‘new normal’ for cultural activities has been either a complete cancellation of events, some form of collaborative virtual video, where the syncing isn’t quite right, or somewhere in between both.

Covid-19 has spelled disaster for the arts sector and indeed cultural organisations who are desperate to preserve and promote Irish culture. The idea to do something very different to celebrate Irish culture on a grand scale whilst being socially distant was a bold one, but one which ultimately became ‘FÉILE—Comhaltas In Britain’s BIG Virtual Weekend 2020.’

Filling the void
The last weekend of June is always a special one in the traditional music calendar as it’s reserved for the All-Britain Fleadh, which this year was scheduled to take place in West London. As the Covid-19 pandemic unfolded, it quickly became clear that the event would not be able to take place on its scheduled date, and then as more time passed, it became clear the fleadh wasn’t feasible at all within the 2020 calendar.

With such a big event which usually attracts several thousand attendees being cancelled, it was leaving behind a large hole in the cultural calendar and whilst facebook had become a host for lots of collaboration videos trending as #CovidCeilidh and #Quarantunes, a centralised large scale event to bring people together was notably missing. This was where Comhaltas in Britain stepped up and created the FÉILE.

From the outset, the goal was to create an event that would be streamed live and free for three evenings on Facebook and YouTube, be as inclusive as possible by encouraging submissions from across Britain and indeed from across the world, and to be broadcast in a seamless, professionally produced format that would present Irish culture in a way which was appropriate. This was no mean feat for the team tasked to deliver the project who—despite being a young, enthusiastic group with lots of ideas and creativity—had little broadcast experience behind them.

Comhaltas coming together
The FÉILE team comprised David Browne from Glasgow, who is also Comhaltas in Britain Youth Officer. Vice Chairperson of the Provincial Council, Patrick Ballantyne, from Luton, Coventry-based Comhaltas PRO, Michael Fitzgerald, and the team was headed up by myself, Glasgow-based Project Officer, Paddy Callaghan. Notable contributions throughout the weekend included introductions from Provincial Chair, Theresa Gallagher-Murphy and Ciara Gallagher-Murphy, the computing and editing talents of Calum McGregor and the event management experience and calm head of Orla Brannigan to keep the ship sailing in the right direction.

One of the most important elements of the weekend would be to feature Comhaltas members and friends from both in Britain and indeed across the world (above). A brief pro-forma was sent out in the hope that in the coming days and weeks videos would be submitted—the hope being to feature the young to the old, the beginner to the professional artist, with everyone being given their place and chance to perform.

The team set the very ambitious goal of receiving two hours of material for this particular format over the weekend. Given most videos were expected to last around three minutes, this would be over 40 videos. What was submitted however, blew away any expectation with videos exceeding five hours playtime being sent. Whilst this opened up its own scheduling issue—it was certainly a welcome complication to have and meant that live broadcast time for the weekend was stretched to over 30 hours!

Another important element of the FÉILE was to hire 15 tutors to each record—or broadcast live—a one hour recital, and to record a one hour masterclass, which could be accessed through the Comhaltas website. Education is at the core of Comhaltas activity and the FÉILE offered a unique opportunity to offer members and the wider traditional cultural world the chance to learn from some of the finest artists in their disciplines at a time when their usual access to teaching may be disrupted.

As with the whole event, in terms of hiring tutors, the FÉILE team thought big, and brought in the very best. Kevin Crawford and Colin Farrell from the band Lunasa were brought in to teach Fiddle and Tin Whistle respectively. Imar’s Adam Brown and Ryan Murphy brought their Bodhran and Uilleann Piping to the event. London powerhouse Orlaith McAuliffee took some downtime from working on the Covid-19 front line as an NHS doctor to teach the flute.

Brechin based banjo player Ciaran Ryan and Guitar genius Tim Edey who lives in Perthsire were also brought on board. Completing the musical lineup was Conor Broderick on Piano, Paul Clesham on Concertina and one of Irelands finest composers and musicians Michael Rooney on Harp. The FÉILE team also brought on board Edwina Guckian to teach Sean nós Dancing, Niall Hanna on Irish Song, and Emer Maguire to teach Irish Language.

Excitement spreads
Bringing together this group was certainly no mean feat but underlined the ambitious vision for the event. And once announced to the public, it didn’t take long for excitement to spread.

Almost all the elements for the FÉILE were in place, there were grassroots performances, professional artists sending in contributions, and a recitals and masterclasses series, but one thing was missing, a headline event for each evening.

One of the team involved in the FÉILE was myself. I am known for DJ-ing Trad-Discos, particularly a few during the lockdown period, so it was an easy choice to fill Friday evening. But the real FÉILE masterstroke was the Saturday evening to underpin the whole FÉILE event—Macalla 1916 on the Saturday evening.

One of the landmark events commissioned by Comhaltas and the Irish Government in 2016 to mark the centenary of the 1916 rising, Macalla 1916 performed by the Comhaltas National Folk Orchestra of Ireland and composed and conducted by Michael Rooney was a quite breath-taking event which captured perfectly the centenary celebration. Comhaltas in Britain—with some foresight—had commissioned a crew to document the first performance of the suite which was in the Barbican theatre London in March 2016, but was yet to edit and release the footage.

The FÉILE provided the perfect platform to do just that, and this included a 30 minute montage of backstage footage expertly edited by Calum McGregor from Irish Minstrels CCÉ who has proven that age is no barrier to professional media production.