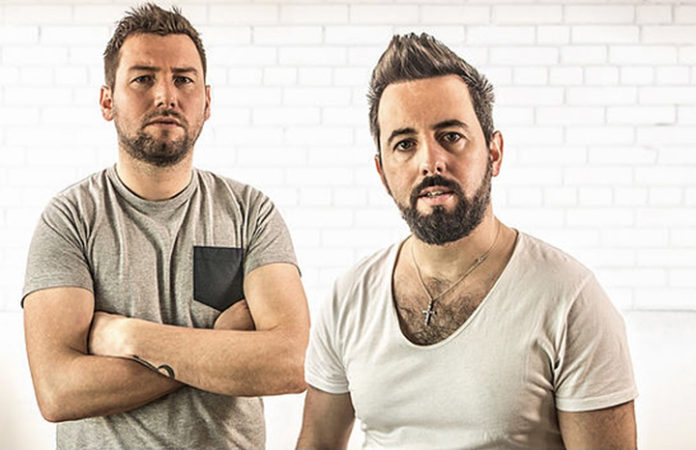 THE Finns—brothers Hugh and Ciaran—are a highly successful folk music duo from Laois, Ireland. Their roots lie in traditional Irish music, but their original songs have been described as alt-folk roots, or indie folk music, with strong hints of blues and rock. The lads have taken the online gig scene by storm and have been regulars on our page. From their brilliant visual backgrounds to their fans’ love of their socks let’s find out a bit more.

How old were you when you first decided music was the career for you and why did you choose this path?
I was about 27 I think. I lost my landscaping job in the recession of 2009 and went off to Australia for two years and when I returned there were still no jobs, but I could play the banjo. So, myself and some friends were asked to play music for The Celtic Nights Irish Show in Dublin in February 2012 and from then on, I decided to stay in the music for good. In 2008, Ciarán left his construction job as a banksman to pursue a traditional Irish music course in Ballyfermot and has played professionally since then.

Who inspired you to go down the musical route? Was it family or other Irish artists?
Before I went to Australia, myself and Ciarán were inspiring each other and contemplating music full-time, but then, as I said, I went abroad. However, the initial inspiration for music was our parents. They sent us to music classes when we were very young to learn the tin whistle and fiddle and it grew and grew. I picked up the banjo when I was 18 and Ciarán started playing guitar during his teenage years. Our father is a sean-nós singer and has brought us to sessions throughout our childhood so that had a huge impact on us.

How would you describe your musical style and why did you choose it?
There’s no official decision to play what we play. We do so many different genres and styles of songs that maybe we should try and define our sound, but we have definitely gravitated towards a folk-roots kind of sound. When we play our originals it has that style, but we love everything we play from rebel songs to sea shanties.

Is there anyone you’d love to collaborate with in the music industry today?
We’d love to do something with Dick Gaughan, although that’s a bit of a stretch. He is a legend.

How has your career been so far? What are the highs and lows and were there any obstacles you came across?
We’ve been lucky enough and have had lots of successes, but there have been so many obstacles and let downs. When you’re a nobody in the Irish music scene, it’s not the best place to be. There have been a couple of instances whereby we won a competition and we had to chase our prizes. We’ve still not received one to this day. They just think we’re young lads messing around. In saying that, we have been on so many successful trips to the US and Europe, have played at Electric Picnic here in Ireland, as well as headlining Whelan’s Live and having a slot at Vantastival festival. The Electric Picnic gig was definitely a top moment and also having our original song Freemind reach the final of the International SongDoor Songwriting Contest was a great buzz.

Since lockdown you’ve held a regular livestream gig. Have you enjoyed them and how do you see the future of the festival scene and live gig scene changing due to Covid-19?
We love the livestreams and we are lucky that Ciarán loves immersing himself in the technology and we both enjoy producing something that’s professional and enjoyable for the audience. We know that this isn’t the future, we will actually fight tooth and nail for the good old, normal days to come back. We want the festivals to come back as they were— without temperature checks, without wristbands or medical certificates, all that stuff. We look forward to enjoying the live experiences again and we’ll all go mad again at those gigs.

Do any of you have any habits that annoy each other?
Not really, but I may have a habit of ‘lazy singing’—pretending to land on harmony notes when I actually know the harmony notes. I also think my jaw clicks when I eat and when we are out touring and staying in hotel rooms, Ciarán takes too long in the bathroom every morning, combing through and shaping his man-beard probably.

You’ve won quite a few awards for your music and your music has appeared on tv and radio for Cruinniú na nÓg campaign and also for Lambay Whiskey brand. How did that come about?
Lambay was a new whiskey brand who just launched a couple of months after we released our debut single Lambay. I emailed them the song and they loved it. Since then, we have partnered up on lots of events and had a good few glasses of Lambay Whiskey! It’s good stuff. Our other song, My Home Town, was chosen by Creative Ireland and RTÉ to feature on their TV and radio adverts for Cruinniú na nÓg two years ago and it’s by far our most successful song.

What has been your favourite gig venue either in Ireland or worldwide?
There was something nice about playing on a stage outside the Raglan Road pub in Disney Springs in Florida when the sun was out and the easy vibes, but the Spike Island Stage at Electric Picnic was class and also upstairs at The Annesley House in Dublin where we supported Wally Page. The venue was small, intimate, and old school. We loved it there, it was the perfect gig.

You were due to play with the Dropkick Murphys in the US. How did that come about?
That was going to be our biggest gig to date, and it was brutal news to get—just a month before we were due to fly out—that the gig had been cancelled due to insurance or something like that. We had played at that festival before and the organiser thought we would fit the bill to play before the Dropkicks, so we were over the moon with the slot. That gig could have changed our careers a lot, so it was devastating. We did get to go backstage when they came to Ireland though. That was something at least.

What are your plans for the future, for example gigs and tours once lockdown is over?
We have to reschedule all our US gigs that we were due to play in 2020/21. Firstly, we are going to host a huge gig at a venue in Dublin when it opens up again. It’s gonna be an album launch gig for us and a celebration of live music. We have also been promised a few gigs up north, over in Glasgow and in London too, so we’re looking forward to organising those trips as we’ve never played in any of those places.

Your fans always enjoy the socks when you’re on. When are you bringing out your own Finns socks?
Ah 2020, the year of the sock! When we have more than a thousand guaranteed buyers, we’ll get them in, because when you’re buying socks, you have to order a load!