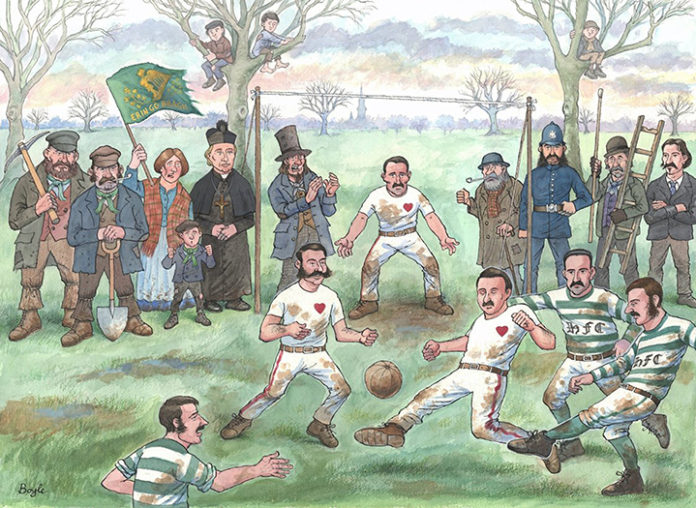 WHILE Hibs won’t be able to lock horns with their old rivals Hearts in Scotland’s top flight for at least another season, both sets of fans will no doubt reminisce on past encounters between the two sides, but it’s doubtful that will include the first ever Edinburgh Derby match!

Yet while no footage exists of the match itself, fans of both clubs will be able to gain an insight into what it might have looked like thanks to a wonderful new piece by Scottish artist Frank Boyle.

Frank, was the cartoonist of the Edinburgh Evening News from 1999 to 2015— despite living in Glasgow. He was twice awarded Cartoonist of the Year at the Scottish Press Awards in 2003 and 2006

The artwork—which has had in the region of 100,000 views on Twitter—records the first Edinburgh Derby between and Hibernian FC and Heart of Midlothian FC, which took place on Christmas Day 1875 at the East Meadows (above).

“I decided to create this image because there is no photograph of the match, an important moment in the capital’s history and the beginning of one of the oldest regularly played derbies in world football,” Frank said.

“Hearts was founded in 1874 and Hibs in 1875,” he continued, telling the story of the piece. “Hibs applied to join the Scottish Football Association but their application was rejected on the grounds that the SFA only catered for Scotsmen not Irishmen. Clubs were banned from playing Hibernian, but Hearts agreed to break the ban and play Hibs during the latter half of 1875.

“For the first 20 minutes Hearts played with eight men as three of their players were late in arriving. Despite this Hearts won 1-0—the scorer is unknown.

“The Hearts goalkeeper was Jake Reid, who had only three fingers on his left hand. The goalie wore the same strip as the outfield players. There was no goal net and the crossbar was a tape stretched between the posts. Spectators often stood behind the goal and interfered with play. The church spire in the background is the Barclay Viewforth Church in Bruntsfield.

“The Hearts player on the right is Tom Purdie, the club captain. The Hibs player second from the right is Michael Whelahan, the captain and co-founder of Hibs. The others are not specific players.

“There is mention of the Hibees first strip being white with green trimming but there is no photograph of it and the club soon adopted green and white hoops with the letters HFC on the front. The Jambos played in all white strips with a heart on the chest. This may have been red as the club had yet to adopt maroon as the club colour.

“The spectators who lined the pitch often encroached on it, included Irish navvies who turned up to matches with their picks and shovels. They acted as bodyguards for the Hibs team.

“The man with the ladder is a lamplighter or ‘leerie’ as they were known in Edinburgh. Their job was to light the city’s gas lamps every evening. Next to him is Robert Louis Stevenson, who wrote a poem about a lamplighter and liked to take long walks around the city. He may have been passing and stopped to take a look.”

If you would like to buy a print of the artwork, you can do so by visiting: https://frankboyleart.bigcartel.com/product/edinburgh-derby-1875-print