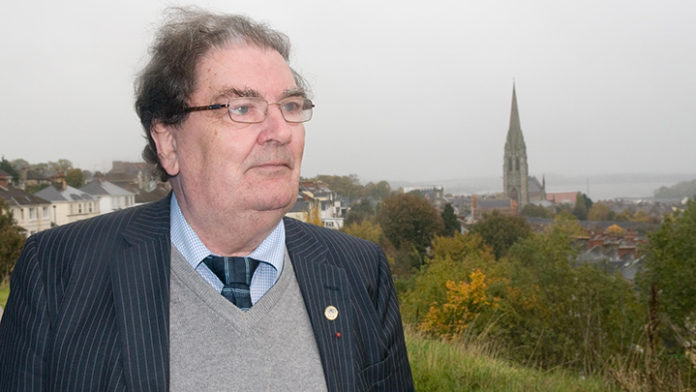 ON AUGUST 26, 1989 John and Pat Hume travelled from Derry to Castlebar to receive a Human Rights Award from the Humbert Summer School. The occasion was the 200th anniversary of the French Revolution’s Declaration of the Rights of Man and the Citizen.

As Founder/Director of the Humbert School, I presented this prestigious prize to the Humes for ‘their outstanding work over two decades to bring peace to the North of Ireland.’

John was deeply moved. In an emotional response, he revealed that this was the first time since the outbreak of the conflict that public recognition was being given to Pat’s ‘indispensable contribution.’

In a short thought-provoking acceptance speech, the history school-master in him came to the fore when he counselled ‘a European outlook in solving the problems of the island of Ireland.’ Pointing out that the British reaction to the Irish Rebellion of 1798 was the 1801 Act of Union of Britain and Ireland, John remarked that this should not have surprised the United Irishmen.

After the unsuccessful French invasion, Britain was merely defending its own interests just as, in the 17th century, it had planted Ulster after the rising of Hugh O’Neill and Red Hugh O’Donnell.

With his strong Derry accent in full voice, he hammered home his pivotal points: “The British did not wish Ireland to be a back-door for what it regarded as its enemies in Europe.”

In contrast, ‘a European opportunity exists for Ireland to strengthen and build its links across Europe and become part of the European majority,’ he continued.

“Today, in 1989, that same Britain, that same France and that same Ireland have agreed to share their sovereignty and to pool it. Essentially, this means that the reasons for the old quarrel are gone. The deep problem that remains is that of relationships within Ireland.”

This problem was recognised by Wolfe Tone, but, unfortunately, the IRA were preaching Tone’s separatism while forgetting that he had acknowledged that the core problem was to create the conditions in which Catholics, Protestants and Dissenters could live together harmoniously.

“Those who call themselves Republicans such as the IRA seem to be going about the opposite way: they preach Tone but they do not practice Tone,” he concluded challengingly.

This is what I call ‘the European Overture’ to John’s ‘single transferable speech.’ It sowed the seeds of the Good Friday Agreement and his controversial dialogue with Sinn Féin President Gerry Adams.

Next morning at breakfast John agreed to keep in contact, as he saw the Humbert School as a vehicle to promote scholarly scrutiny of The Year of the French, forging peace and reconciliation between the Nationalist and Unionist traditions through the Bishop Stock Address in Killala Cathedral and in debating Ireland’s role in Europe and the world through an annual Humbert Foreign Policy Forum—all promoting tourism in French Mayo. (Now, The Humbert Walk along The Wild Atlantic Way).

The Humbert themes were worked out by me in 1986-87 with Fr Michael Conway and Jackie Gleeson, and in 1989 were approved by Cardinal Tomás Ó Fiaich, who addressed that year’s School in Bessie’s Bar in Kilcummin. Essentially, they constituted ‘Humespeak.’

This was a long way from my 1960s Glasgow University days, when I watched on television the Derry civil rights activist confronting British Army and RUC commanders. Twenty years on, John Hume was consenting to become President of the Humbert Summer School.

Watching his televised funeral triggered memories of travelling by express train from Brussels to Strasbourg with Pat and John for the first session of the first directly elected European Parliament in July 1979. En route, he told me of his economic plans for Derry and Ireland through ‘a Europe of the Regions.’

Of walking with John over the bridge in Kehl from Strasbourg into Germany, which represented his model of Franco-German reconciliation.

Of the day when he congratulated me on my report of his unscripted address to the New Ireland Forum in Dublin Castle.

Of the night when unable to find a hotel in Strasbourg The Examiner’s Val Dorgan and I travelled with John into Germany to find shared accommodation, only to be awakened at dawn when John brought us on a misty walk through the Black Forrest.

Of the many splendid evenings when John joined journalists, including John ‘Backbencher’ Healy, at our upmarket rendezvous in the Maison des Tanneurs and later at the Bang the Bells bistro, where he would sing Phil Coulter’s The Town I Loved So well.

Of how Healy adored Hume, especially when ‘Monsieur Jean’ was ordering a fine bottle of Gewurtztraminer in the European Parliament’s members’ restaurant.

Of a long sunny Saturday in Georgetown after dinner the previous evening in the White House with Bill and Hillary Clinton. A free day spent wandering around art galleries and bookshops in between sampling local beers and fine food, while also chewing verbal cud about Ireland.

Of how in 1984 John launched Inside the EEC, which I co-wrote with Ruth Barrington, and later in 1990 Cardinal Tomás Ó Fiaich’s Irish Colleges in France.

Of how Father Ó Fiaich, Modern History Professor at Maynooth, supervised the M.A. thesis proposing Derry’s economic development by the thin, jet-black, curly-haired youth who was passionate for sport as a nifty inside left and supporter of Derry City. Father Ó Fiaich’s influence proved formative on the future peace-making of the Nobel Laureate.

Of how UDA gunman Michael Stone’s killing three Catholics in Belfast’s Milltown Cemetery in March 1988 during the funeral of the Gibraltar Three convinced me Sinn Féin must come in from the cold.

Place in history
John Hume earned his place in history as the John the Baptist Supranational Statesman of All Ireland Unity. Arguably, his greatest converts were Gerry Adams and Martin McGuinness.

However, post-Brexit Ireland must carry on Hume’s mantle. So, I propose the holding of an annual John Hume Day in Mayo on the weekend closest to August 22, the landing date in Kilcummin of General Humbert.