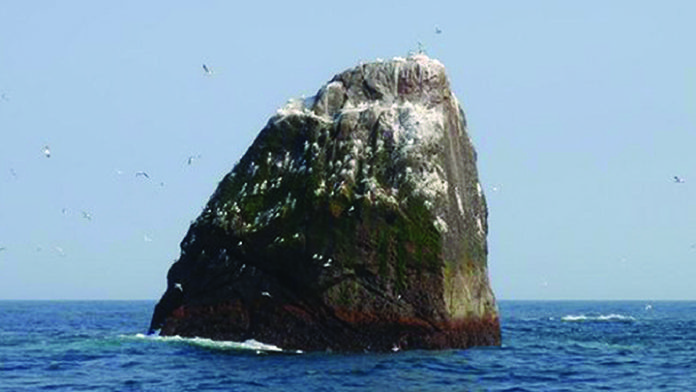 A SCOTTISH patrol boat is at the centre of the latest dispute around Rockall after Marine Scotland officials boarded an Irish trawler.

The skipper of the Northern Celt, based at Greencastle in Donegal, was instructed that he was no longer permitted to fish within 12 nautical miles of the Atlantic outcrop (above) as an EU vessel.

Though this latest dispute over who has the rights to Rockall is prompted by the new landscape created by Brexit, it is merely the latest in a long line of controversies surrounding the isolated rock.

Giving his account of the ordeal, skipper Adrian McClenaghan told RTÉ News that the fishing grounds around Rockall have provided an important part of his yearly catch as he manages the pressure of skippering his nine man crew.

“We were fishing in Rockall and members of the crew from the Jura boarded us,” he said. “They informed us that we could no longer fish inside the 12-mile limit of Rockall. The Scottish navy [sic] are continuing to patrol and we’re waiting on further instructions from the Department of Foreign Affairs on what their next move will be.”

Mr McClenaghan received the support of Sean O’Donoghue, chief executive of the Killybegs Fisherman’s Organisation—of which the northern Celt is a member.

“We don’t accept, and neither does the Irish Government, that Scotland is entitled to have a 12 mile zone around Rockall,” Mr O’Donoghue said. “We are surprised now that the Scots have taken this action because we understand that this [issue] had been toned down with a diplomatic solution. Now the Scots are taking matters into their own hands again.”

With hopes for a diplomatic solution to the dispute Irish vessels in the area have been given hope by the comments from the Department of Foreign Affairs, which confirm the Irish Government has spoken with the Scottish Government.

Confirming that they were aware of ‘contact between an Irish fishing vessel and a Marine Scotland patrol vessel,’ the department said that they have been in discussion with both the relevant Scottish and British authorities.