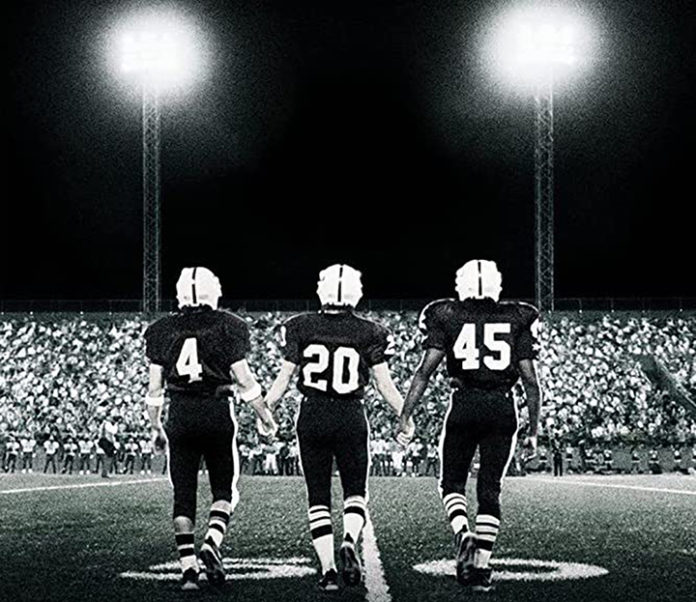 YOU could be forgiven for assuming a book about American Football in the small town of Odessa, Texas could draw absolutely no parallel with life here in Donegal, but upon the reading of Friday Night Lights by HG Bissenger, you’d be wrong. This little book—written by a sports journalist—not a novelist, reaches far beyond the realms of the Lone Star State.

The book was penned in 1989 by a Philadelphia-based writer who, for the purposes of research, moved his family to this small sleepy town in Texas to cover a year in the life of a football team. Not a professional sports outfit like the Dallas Cowboys or even a lucrative College team such as the Red Raiders, however. Instead it was the Permian Panthers.

A high-school football team. Made up of players no older than 17 who, like most teenagers everywhere, lived at home, went to school, and hung around with their friends at house-parties and fast-food joints.

And yet, the narrative that surrounded the lives of six players, their coach, Gary Gaines, and the team’s all-important but often domineering (financial) boosters caught the attention of the world.

In the three decades since the book’s release, it became a New York Times bestseller, a feature-length movie in 2004 and a highly acclaimed TV drama spin-off between 2008 and 2012. So, what was it that made the story so compelling? The answer is simple. It’s rooted in the fact that you didn’t need to be a football fan at all to enjoy it. It was a story about people.

Connections and community
Where the connection with Ireland lies is in the fact that it touches on how people had to cope with life after a period of economic prosperity and joy to the crash that followed and it was the younger generation who had to clean up after a party to which they hadn’t been invited.

Oil-money in early 1980s Texas was a proverbial goldmine, but when its value dropped, the ‘new money’ generation had to declare bankruptcy on their lavish assets and materials while their children had to face the prospect of a future without much promise. If money was the only problem, that could’ve been sorted, but other issues began to surface.

Southern states in the US have always been synonymously linked with fervent Christianity as well as a potent resonance of racial bigotry serving as an undertone.

Indifferent attitudes towards one another between blacks and whites was nothing new. After all, the debacles that coincided with the Civil Rights Movement in Alabama were only a generation earlier, with much of a school’s populous being the offspring of parents who held highly contrasting views on divisive issues such as segregation and racial profiling.

The growing influx of Hispanics from Mexico and other parts of Central America added fuel to the fire. Especially when members of their community began to hold office and positions of high political authority. And what was the one thing that could bring these kids together? It certainly wasn’t academia—it was the game of football.

That’s not to say that the team huddles, defensive tackles and the scoring touchdowns solved all the town’s financial and social unrest, however. Far from it. The school itself came under huge pressure for how it would squander funds on the football programme ahead of looking to develop facilities that could improve attainment in the classroom.

Legal cases famously ensued over players being dropped from the team roster for failing to meet the ‘no pass-no play’ criteria. Courtroom proceedings that gathered as much media attention as the trial of a convicted felon would, but I won’t spoil how that situation turned out for you.

The FNL author, the aforementioned HG Bissinger, received high praise and critical judgement in equal measure upon the book’s release. Some local Odessans accused him of fabrication and sensationalism in his writing, believing that his references to the town’s tendency for alcohol, overt-Republicanism and God-fearing nature was used to stereotype Texan natives.

On the other hand, his ability to write in a straight-to-the-point manner, with no needlessly flowery language that still contains a wonderful use of imagery and metaphor perfectly encapsulates the spirit of a team in a downtrodden environment. It’s journalistic integrity at its highest and it shouldn’t be surprising that inspired a follow-up movie and TV show.

Essentially, it captures the Real America in ways so much other US-based literature and film tends to hide away from us. It’s not a book that generates the image of the perfect family who tackle issues together, nor is it one where everyone in the neighbourhood or school cafeteria share the same values. It’s gritty in parts and uplifting in others; just like real life.

Now, here’s how it could link to life in Ireland. While our secondary school sports teams rarely—if ever—play in front of a big crowd like the Permian Panthers do, Bissinger’s writings show us the pressures and tough decision they must face as teenagers in the modern world. About the future, about the friendships they fall into and about their perception of things.

The chapters which concern themselves with Odessa’s boom to bust economic tenure could’ve served as a prolific warning to Irish people during the so-called ‘Celtic Tiger’ era about how to be more sensible with their money. Too little, too late there, I suppose.

Most importantly though, it teaches about us and the society we live in. How giving your time and energy to apply your services to a local team—be it in soccer, rugby, Gaelic games and so on—can be both a blessing and a hinderance.

It can make you feel a part of your community and give you hopes and ambitions for the future, but it won’t always exempt you from criticism.