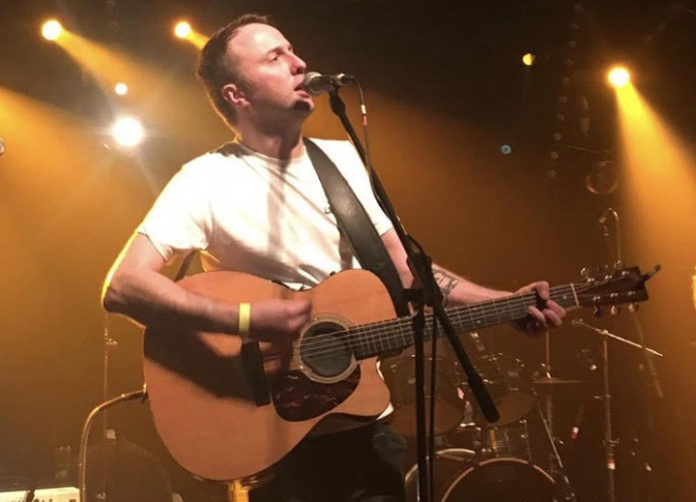 WITH the lockdown still upon us, we at Glasgow Irish Bands And Gigs thought it would be a good time to get up close and personal and find out a bit more about some of the singers and bands on the current scene. This month we caught up with John Jo Gallagher (above) currently with the Benidorm Rovers.

When did you first come into the Glasgow Irish scene, and how would you describe it at that time?
I first properly started gigging around 1997/98, for years before that I was jamming with other bands and musicians, but from 1997/98 I went on my own. At that time all pubs were very busy, on a Sunday night you would struggle to get in to bars like McNee’s, the Brazen Head and McNeill’s. The scene took a dip for a while but I’m glad to see there is another insurgence of Irish bars in Glasgow, although it’s not as busy as it was back then.

I was lucky that my father had many Irish musicians as friends and they took me under their wing. The great Hughie Boyle had a session every Wednesday in the lounge of the old Squirrel Bar, which I went to around 1992 when I was 12 and there was some great musicians passing through that. Also when I went to Ireland, my dads friends, the Gillespies, always got me up to play with them, it was a great start musically and confidence wise.

Who would you most like to collaborate with?
Shane MacGowan! Sadly I missed the opportunity after being on an all-night session with him. I went home and my mates ended up recording a track called Glasgow Belongs To Me with him which was the B side to the Celtic hit single The Best Days Of Our Lives… though to be honest I don’t think anyone can remember much about that recording session!

What has been your favourite venue to perform at?
I’ve been lucky to play on the pitch at Celtic Park and the Barrowlands supporting Charlie and the Bhoys, as far as venues goes I don’t think it gets any better than them!

Talking of performances you have been a member of a few bands, what’s the best tour road trip you have been on and why?
Playing in Manhattan with the Amadans was an amazing trip and one that we buzzed off! The New York Fenian Bhoys are a great bunch of lads and made us feel very welcome. I’ve also been doing the winter tour for 18 years now with the Rovers, which is always mighty craic too.

What’s the craziest thing that’s happened on tour?
Far too long to answer and I shouldn’t really tell stories, but I will just say there’s been broken instruments, broken equipment, cuts, bruises, trips to hospitals and fuzzy heads!

What would you be doing right now, if it weren’t for your music career?
God only knows! I’ve been playing in bands and solo since I was 17 and doing this as a full-time job since I was 22, so I don’t really know anything else. I’m lucky to have taken on Connolly’s Irish bar in Glasgow with my friend so that’s something different, challenging and rewarding, but music will always be my first love.

What is your favourite song to perform?
This is a very hard question, and one I struggle to answer! Every song has to be sung from the heart and I love every one of them equally. I do tend to tune-in to different songs now and then and perform them a lot, but there’s no individual song that is a ‘favourite,’ they’re all great songs in my opinion.

The Glasgow Irish music scene prior to Covid-19 looked to be getting more popular. Why do you think that’s happened, and do you believe it will thrive again?
The Glasgow scene has boomed again, I remember a time when there was only really two bars in Glasgow city centre, Failte (Finnigan’s Wake) and Molly Malones, but we were mainly ‘banished’ to the south side or the Gallowgate. Now there is a massive influx in the city centre and it’s great! We’re here and we’re proud of who we are and aren’t leaving! Sadly some bars from when I started have gone now, but I hope with this new influx of Irish bars and a thriving Irish music scene in Glasgow that the Glasgow Irish realises how lucky they are and lend their support to Irish bars in Glasgow—and from what I have seen the last few years they are. Long may it continue.

Hopefully soon we can be back in Connollys, watching a John Jo with a few refreshments. Sláinte