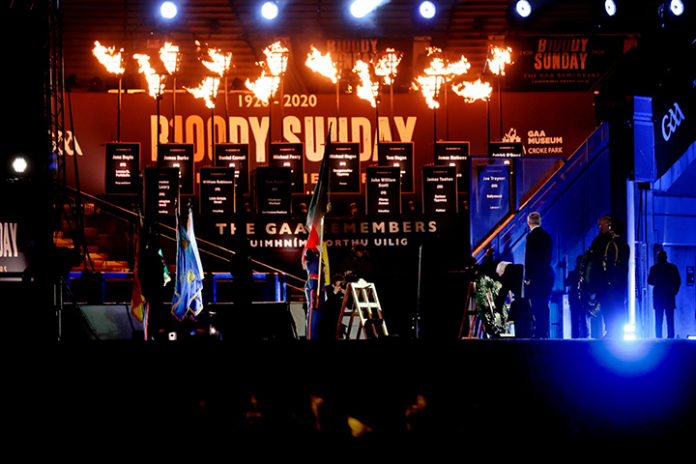 THE Gaelic Athletic Association marked the 100th anniversary of the Bloody Sunday massage in Croke Park with a series of commemorative events on an emotional weekend for Gaelic Games.

The massacre in 1920 saw British forces firing indiscriminately on a crowd in Croke Park, killing or mortally wounding 14 people and injuring dozens more. The massacre followed the assassinations of members of the Cairo Gang in Dublin, targeted by the IRA in an attempt by Michael Collins to break the network of British spies and informers in the city. In all 15 people were killed, nearly all members of the British forces who were engaged in espionage and intelligence work.

During the massacre, which took place during a challenge match between Dublin and Tipperary, one of the players was killed—Tipperary’s Michael Hogan, is now commemorated in the stand at Croke Park which bears his name.

During the commemoration (above), which took place in Croke Park before the Leinster Football Final between Dublin and Meath, actor Brendan Gleeson read an oration written by author Michael Foley in front of 14 torches burning in the Dublin darkness.

“Tonight we remember each victim and honour the grief carried by their families down through the decades,” he read in tribute. “They come alive again in the stadium in the 10-year-old child thrilled by the prospect of a day in Croke Park, in the couple in love at a football game holding hands, lost in the game and each other.

“They live again in young people making their trip to Croke Park part of one long weekend adventure, they live through older ones going to the matches following the tradition handed down to them.

“They are our family, our friends, our people.”

Also in attendance were President Michael D Higgins and Taoiseach Micheál Martin, while the GAA was represented by president John Horan and GAA director-general Tom Ryan.

The following day in Cork, Tipperary contested the Munster Football Final in commemorative green and white jerseys bearing the name of Michael Hogan, having switched from their traditional blue and gold for the day in honour of the fallen footballer. On an emotional day, Tipperary defied the odds to claim their first Munster Championship in 85 years, ending the hurling county’s long wait for football glory and ensuring a fitting tribute.