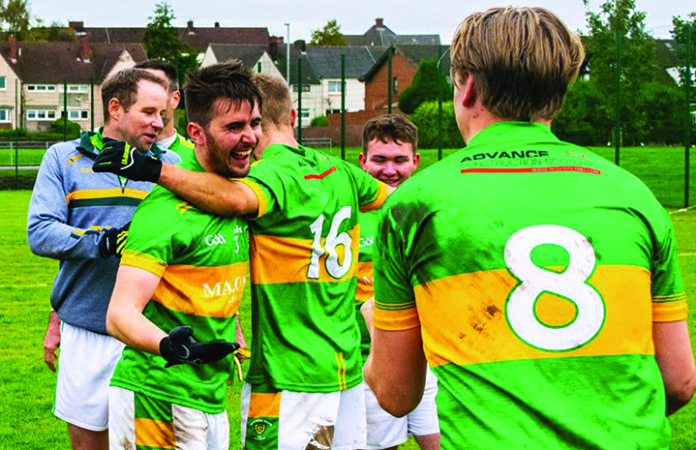 WITH a successful year in which the club lifted county silverware on the park, welcomed scores of young Gaelic footballers to the sport and adapted to life at their new home, 2019 was a year to remember for Tír Conaill Harps.

Club members are already looking forward to building on their efforts in 2020, but as the New Year begins they took the time to look back on an enjoyable and exciting time for the club and use their highlights to spur them on to new heights over the next 12 months.

For Danny McGowan, the sight of young players enjoying the experiences he had through the Harps in his youth provided the best memory of the year.

“My highlight of the year was the trip to Manchester in September,” he reflected. “It was wonderful that so many kids got to play on the day with their parents down to watch them. I was lucky to travel to England and Ireland to play many, many times as a youngster and teenager and to see the next generation of the Tír Conaill family playing and enjoying the competition was great for all to see. Seeing both my daughter and my nieces and nephews all taking part in blitz was a great sign for the future.”

Those signs for the future were also the high-point for Gareth Doonan, who looked at the way the club has used its new base to bring Gaelic football to a wider audience and build the sport up in Glasgow.

“My highlight of the year is the growth in participation in 2019,” he said. “It’s been a great achievement that we have had over 80 kids out training at our new home at Cambuslang Sports and Rugby Club.

“The numbers have increased at all age groups and it’s wonderful that we have had more coaches helping every week. Let’s hope the growth continues in 2020.”

Among the championship winning side of 2019 was Rory McIntyre, who helped his charges over the line in his role as physio and looked back on being welcomed into the club after falling away from Gaelic games since leaving home.

“My highlight has to be meeting the team this summer, and feeling at home straight away in this club,” he explained. “I’ve not been involved in a Gaelic club since I left home about eight years ago, but the sense of community was brilliant and the lads really bought into what I was suggesting as a physio. Seeing lads come back after their rehab to make big differences in games was great to be a part of.”

Playing highlights, too, made it a special year and Paraic Marry (above) spoke about his own personal achievement in scoring for Tír Conaill in a big match.

“Playing full back against the Gaels at Cambuslang I decided to run past the halfway line to take the ball off the shoulder of Dan Gallagher,” he said. “I managed to weave my way pass two players and kicked a point from 30 yards out. We had won the game before then, but it was still great scoring a point against our rivals.”

With preparations for the new season well under way and the youth section of the club continuing its vibrant sporting efforts Harps of all ages are hoping for another year to look back on fondly.

If you would like to play for Tír Conaill Harps the club is looking to recruit new players for its men’s adult team and underage teams. Underage players, both boys and girls, from 4-18 years old are all welcome to join their ever-growing ranks. The club is also looking to start a ladies team so if you are interested get in touch via Facebook: http://www.facebook.com/tirconaillharps