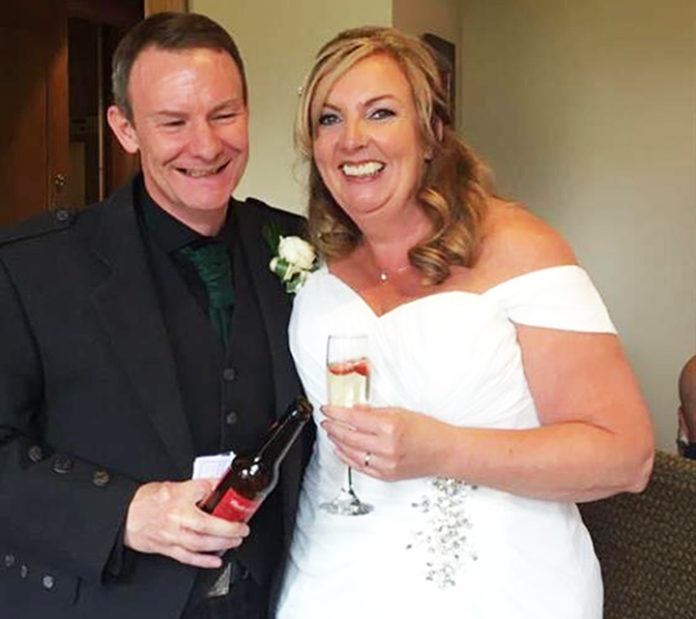 I MET Helen—and her soon to be husband—Chris (above) in November 2013, when they volunteered to help the Fans Against Criminalisation campaign do a collection at Celtic Part for the ‘Dam Bhoys’—a group of Celtic supporters who were assaulted and wrongly charged by the Amsterdam police before a Champions League game against Ajax in November 2013, and who were exonerated in January 2018.

They volunteered because they had some experience of organising one of the only other coin collections ever to take place on the footprint of Celtic Park. It turned out to be a much more complicated operation than we had anticipated and without Helen and Chris I don’t know how we would have managed the organisation of the collectors, the counting and banking of the £27,000 we collected that day. I can still remember her organising the teams, efficiently, precisely and in a totally relaxed and friendly way for such a huge operation within such a tight timescale. So, for that alone, it was a lucky day, the day I met her. Over the seven years since then, I have had countless other occasions and reasons to be thankful that I met one of the kindest, funniest, most energetic, committed people I have ever known.

Neither of us were young when we first met and we were already leading very busy lives with lots of family and friends in those lives. I am certain, though, that if I had met her earlier we would have become much closer than those short seven years allowed us to be. I took to her instantly; I enjoyed her big smile and her even bigger laugh; I loved her total commitment to whatever campaign she was involved in (at least three of which I observed at close hand); I loved the way she loved her boys and I loved her total devotion to Chris; I shared her love of Celtic and often met her at away games.

Working together
We worked closely together in the Call It Out campaign, which she contributed so much to in the short time since we set it up. She was there from the start with the An Gorta Mór project and was so looking forward to seeing a permanent memorial to the millions of dead and displaced being unveiled.

One of my strongest memories of her was at a vigil outside St Alphonsus last year when we stood in silent protest as a parade of anti-Catholic marchers came past the Church. Before they arrived, the police were being unusually unhelpful in that different officers were giving out different instructions. Helen went over to what appeared to be the most senior officer to try to sort it out and then—literally—stomped back across the road to me and said: “He has just threatened to physically move us is we don’t step back!”

The two of us just looked at one another and before they could issue any more instructions, we began to inform the community that we would not be moved and if anyone couldn’t risk being arrested, they better step back.

Needless to say the over-eager officer had to slink off in disgrace and the score was lest as ‘Outraged Helen 1-0 Unreasonable Police Officer.’

She also took great delight when bigots started posting daft messages that I had a secret identity and that my real name was Denise—presumably because they got confused with her surname Dunese, which is pronounced the same as Denise.

Faith shared
As women of strong faith, we also shared the same devotion to God, our Church and our community. It did make me laugh though when I found out she was in the Union of Catholic Mothers in her parish because I had always associated this with much older women of my mammy’s generation.

I also remember her laughing her socks off over the phone in November last year when I told her that I had prayed for her recovery at the Scala Sancta in Rome, and that I had not intended to actually go up the Holy Steps on my knees but had been shamed into it by the fact that two ladies we both knew—one in her 70s and one just turned 80—had gone up in front so I had to follow! I know that she was immensely grateful though, for every prayer, Rosary, Mass or act of devotion that people offered up for her recovery—and there were many, such was the respect and affection in which she was held by so many people.

Illness and death
She was, quite literally, a force of nature. When the extent of her illness became known, I did not doubt, for one second, that she had the strength to beat it. I knew she would be desperate not to leave her two young sons and her beloved husband, Chris and, if sheer determination could have defeated the aggressive cancer she had, she would be here now: still with us and still lighting up the lives of her parents, brothers, sons, Chris and her wide circle of friends and admirers. Sadly, determination can’t do that, and Helen died in Chris’s arms on Saturday May 2, only seven months after her diagnosis.

Even in her very last days she was still battling on so bravely—even refusing painkillers at one point so she could be alert enough to speak to Chris and the boys.

The pain of losing Helen was exacerbated by not being able to offer comfort in person to Chris and her family and not being able to attend her funeral. I don’t think I will ever forget having to watch her funeral Mass and her graveside service being livestreamed by the good people of her parish. Neither will I forget that the Rosary traditionally said at these times had to be conducted on Zoom instead of us being gathered round her remains.

I am sure that God heard us anyway and that there will be other opportunities for us to gather together and pray for her and her family. Please God that day won’t be too far away and what a crowd will be there, I am sure. A fund raised in her memory, by Daniel’s girlfriend Stephanie, for Strathcarron Hospice, whose staff did so much to make her final days peaceful and pain-free, has exceeded all expectations and is currently sitting at over £23000 (including Gift Aid). Well, I say exceeding all expectations, but if you ever came across Helen you wouldn’t be all that surprised.

Memorial
When the memorial to those who died and those forced to flee starvation in Ireland and seek survival here in Scotland is unveiled at St Mary’s in the Calton, it will be a day of mixed emotions as Helen won’t be there in person, as we had all hoped and prayed she would. Of this I am certain though, the physical presence of her husband and sons and the place that she has in the hearts of all those people who knew her for a long time, or, like me, for a relatively short time, will mean that Helen Dunese Stewart will be there.

To paraphrase a son of that particular Parish, because she was there, and she was always there—wherever there was work to be done—and God Bless her. Deepest condolences to Chris, to Daniel and Stephanie, Ryan, to her parents, Patrick and Mary, her two brothers, Patrick and Martin, and their families. Ar dheis Dé go raibh a hanam.