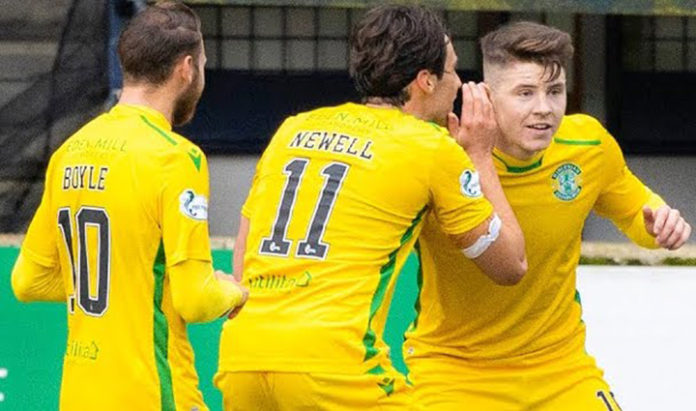 FOR the second time in 12 months, Hibernian FC has been humiliated at Hampden. A year ago, bungling Paul Heckingbottom’s dreadful Hibs side was annihilated 5-2 by Celtic in the League Cup Semi-Finals. Halloween, on Saturday, brought a very different type of Hampden humbling for the Hibees, as Jack Ross’ men lost embarrassingly in the Scottish Cup semi-finals against their lower-league city neighbours, 2-1 after extra-time. The difference this time was that Hibs didn’t play badly, but the result—slipping up in the cup against Championship Hearts—will hurt Hibs fans far more than their shambolic drubbing against the Hoops a year ago ever did.

Hibs hadn’t lost a major semi-final or final to a lower-league side since the defeat to Ayr United at Hampden in February of 2002—the only other big occasion in which the green jerseys have been similarly humbled by a lower-tier side. The fact that the lower-league side in question this time was Hearts certainly rubs salt into Hibee wounds. The almost mystical Indian sign that the Jambos seem to have held over their city neighbours for much of the last 37 years—since Hearts were promoted in 1983 following years spent as a yo-yo team—translates into quite a statistic. The two sides have met 142 times since Hearts were promoted in 1983—Hibs have won just 29 of those matches, 50 have been drawn.

Jack Ross now joins Tony Mowbray and Pat Fenlon on the ignominious yet short list of ‘Hibs managers to have lost to Hearts at Hampden’, yet the Hibees’ poor derby record actually touches every Hibs boss since Pat Stanton in the 80s, with only Neil Lennon and Alex Mcleish having anything like a decent record against the jambos as Hibs boss. It’s become a generational thing now which spans decades and will need to be addressed by Easter Road’s current incumbents whenever the championship jambos ever return to playing top-flight league football.

Saturday’s Hampden clash saw a match-pattern familiar to Edinburgh football fans of the last 35 years or so. The Hibees had the best of things for the first hour. They asked questions of Hearts’ defence, they defended well themselves, they passed the ball better and asked far more questions of Craig Gordon than Hearts asked of Ofir Marciano. But then, despite all of that, Hearts scored first. There were no fans in attendance that one could hear cheering or groaning, yet all but the youngest of Hibs and Hearts fans watching at home must have felt that they had seen this movie before, so to speak.

And yet, the Hibees didn’t crumble after Wighton had given Hearts the lead on the hour. Within seven minutes of the opener, the Cabbage came roaring back and levelled the tie, Christian Doidge’s looping header squaring things at 1-1. In extra-time though, when Hibs’ new hotshot striker Kevin Nisbet managed to hit the bar with a penalty kick, one could feel the breath of history about to repeat itself, looming over the remainder of the match. Sure enough, Hearts got their own penalty and Irishman Liam Boyce made no mistake from the spot, ultimately giving Hearts the 2-1 victory and cup final place.

This wasn’t 2006 under Mowbray or 2012 under Fenlon—this was no derby drubbing. Hibs, for the most part, played very well. The problem was that Hearts played very well themselves after the first hour, following some tactical substitutions. Those changes put Hibs off their stride, though the Hibees were toiling to beat an inspired Craig Gordon, who helped keep his lower-tier side in the match with four excellent saves. In short, both teams played well, but on this particular day it was the Championship minnows who had luck on their side.

One frustrating statistic for Hibs fans goes a little like this: Eight times since the mid 1980s, Hibernian have been beaten in semi-finals by poor teams who have went on to themselves be annihilated in the final, leaving Hibs fans wondering what might have been, had they not lost the semi-final.

As in most of the above fixtures, the team who eliminated Hibs will face Celtic in this year’s Scottish Cup Final. Hibs fans will be hoping that history repeats itself and that Neil Lennon’s side can prevent Hearts from winning the trophy.

Of course, Hibernian’s cup-exit doesn’t in any way detract from the team’s excellent run in the 20/21 season, in the Premiership and League Cup. Since losing 3-0 at Celtic Park in late September, the Hibees have played six matches and won five of them—the only real blot on the landscape being a 0-0 draw away to Ross County. Brora Rangers, Forfar and Cove Rangers were all easily beaten in the League Cup group stages—there were no cricket scores but the Hibees got the job done in those games. In the league, Hamilton were beaten 3-2 at Easter Road, and a week before the cup-derby the Hibees beat Kilmarnock 1-0 at Rugby Park (above). Standout performers thus far have been Nisbet, Boyle, Gogic and Doidge —the latter of whom must surely be due international recognition from Wales.

Jack Ross’ men sit third in Scotland’s top flight and also top their Betfred League Cup group, having already qualified from it with one game to spare. Despite a bitterly disappointing derby-cup defeat, there is still much to look forward to in the coming weeks and months from Edinburgh’s green and white, both in league and in cup. The Hibs go marching on…