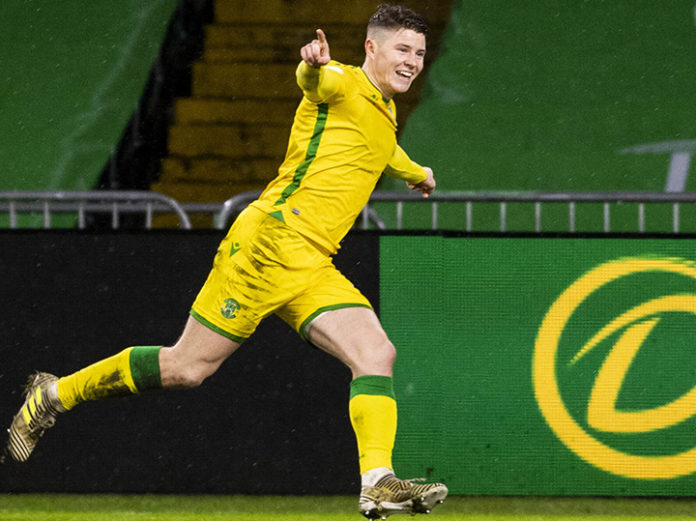 HIBS nicked a point in their most recent match, away to Celtic, thanks to a late Kevin Nisbet equaliser which tied the match at 1-1.

David Turnbull had given the hosts a 1-0 lead with a stunning free-kick, which beat new Hibs goalie Matt Macey. The towering keeper—on loan from Arsenal—made some great saves in what was a very even match in which a draw was a fair result.

However, for Hibs and for Jack Ross, it was also a missed opportunity to end the Edinburgh side’s 11-year winless run against Celtic in Glasgow. Hibs were without Martin Boyle for this match, but were up against a Celtic XI more like a reserve team, amid the fallout from that club’s recent trip to Dubai.

Hibs had an excellent chance to end that winless run but failed to take it, yet a point against Scotland’s champions is still a good achievement as it stopped a run of three straight defeats for the green jerseys.

The Covid-19 aspect surrounding that Parkhead encounter must surely force football authorities and the government to re-evaluate how the current season can best be allowed to continue amid a global pandemic which yet again grows exponentially worse around us—saving lives and protecting the NHS is far more important than a game of football, after all. Players, clubs and governing bodies must act responsibly. When the late Bill Shankly famously quipped: “Some people believe football is a matter of life and death, I am very disappointed with that attitude. I can assure you it is much, much more important than that” he was, of course, being ironic. Anyway, enough of the doom and gloom.

Hibernian began December brightly with three consecutive victories, scoring nine goals and conceding just one. The month began with an impressive 3-0 win away to Motherwell—the Hibees’ biggest victory at Fir Park in the league since Pat Fenlon’s side won 4-0 there in October of 2012. Motherwell are no mugs these days, but Jack Ross’ men pulled off a 3-0 win thanks to second-half strikes by Boyle, Doidge and Stephen McGinn, with added help from the home side’s poor finishing.

Hamilton Accies were then demolished 4-0 at Douglas Park, the green jerseys’ goals coming from Boyle, Doidge, Nisbet and McGinn. That result briefly hauled Hibs into second place in the table. In those two victories we saw everything that is good about the current Hibs side when it’s in full swing—pacey attacks, solid defending and confident passing —more of that, please, Hibs.

The Betfred Cup quarter-finals took the Hibees to Recreation Park to take on Alloa Athletic—the Wasps had humiliated Hibs’ lower-tier city neighbours, Hearts, in the previous round, but there was to be no capital double for Peter Grant’s men, as Edinburgh’s Premier football team eased through to the semi-finals, winning 2-1 in the end. The Hibees were made to sing for their supper by the plucky part-timers, though. Paul Hanlon’s OG gave the home side a 1-0 lead which they held until around the hour mark, when Christian Doidge hauled the Hibees level. Doidge also caused the late winning goal, which was actually an OG by Alloa’s Jamieson.

Hibs will play St Johnstone in the tournament’s semi-final and have history on their side in that tie—the Hibees eliminated the Saintees from that tournament at the semi-final stage in both 2007 and 2016. The other semi-final will be contested by Livingston and St Mirren, so the men in green have a great chance to lift the trophy for the fourth time.

The next match saw the Hibees blow the chance of a five-match run of victories, when they were held to a 1-1 draw at home to Dundee Utd. Despite a decent and confident display, manager Ross was fuming that his side had dropped two points in the match. New boy Kyle Magennis got his first goal in the green, but United equalised late on through Luke Bolton. Had it not been for the heroics of United goalie Ben Siegrist, the Hibees would have won that one easily.

The Hibees soon got back to winning ways, Kevin Nisbet notching the only goal in a 1-0 home win over St Mirren, a match in which Christian Doidge was red-carded late on.

It’s been almost three years and 10 matches since Hibs last beat Rangers. That’s a statistic Hibs fans don’t like one bit, having gotten used to seeing their heroes stand up to the Govan side in recent years under Alan Stubbs and Neil Lennon. The recent Boxing Day match at Ibrox against the runaway league leaders saw the Hibees lose 1-0 in what was a largely tepid affair.

Two more defeats followed, both at home to supposedly ‘lesser’ opposition. John Hughes’ new charges Ross County won 2-0 at Easter Road, then the Hibees were humbled 3-0 at Easter Road by David Martindale’s Livingston side. That last result, at least, should warn the Hibs players against any complacency should Hibernian meet Livingston in the League Cup Final.