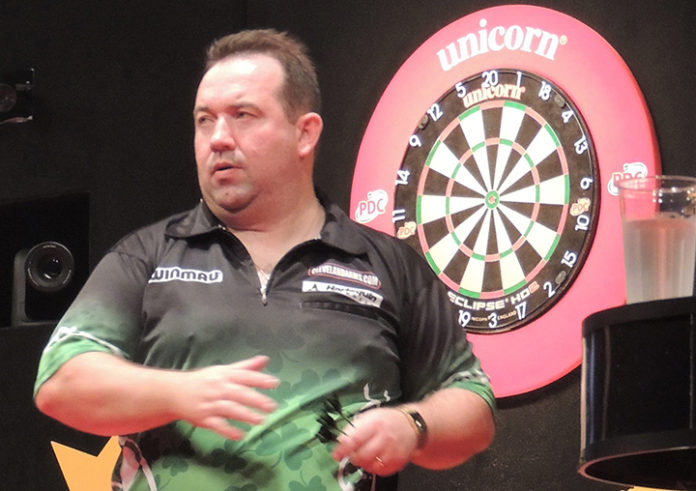 THEY say it would not be Christmas without the darts and I think it is fair to say a statement was never more apt than this year.

For 16 days during the Festive period, the top arrow-smiths in World Darts provided some top-class tungsten entertainment from the Alexander Palace in North London minus the usual carnival atmosphere and fancy-dress.

It was perhaps fitting that the only night a small band of fans were inside the Ally Pally was on opening night where reigning and defending World Champion Peter ‘Snakebite’ Wright entered the fray dressed head to toe as the Grinch and the Scot kicked off his defence in style with a 3-1 win over Steve West.

The growing Irish continent made the short trip across the water with the usual degree of optimism and confidence. However, it was not to be on this occasion as a luckless few days saw Cork’s Ciarán Teehan and Meath teenage sensation Keane Barry narrowly beaten by the experienced pair of Wayne Jones and Jeff Smith respectively.

There was more joy for Carlow’s Steve Lennon, who turned in an impressive 97 average on his way to a routine 3-1 victory over Sweden’s Daniel Larsson. Lennon was edged out by one of the form players in World Darts in Devon Petersen by the same scoreline in a tale of missed doubles.

Limerick’s Willie O’Connor —who famously walked out as a Premier League contender in the 3 Arena in Dublin last February—also cruised through Round 1 beating Niels Zonneveld. He set up a mouth-watering second round clash with Derry’s Daryl Gurney. The World Number 11 looked to be coasting to a 3-0 rout before O’Connor sparked a spirited comeback that ultimately fell short.

Gurney would himself go on to suffer a similar fate in the quarter-final when he was defeated in an Ally Pally classic by eventual winner Gerwyn Price after wins over Chris Dobey and fans’ favourite Vincent Van Der Voort. It represented ‘Superchin’s’ joint best finish and a positive end to what was a far from prosperous 2020 campaign for Gurney.

Another Irishman who took World Champion Price every step of the way was Fermanagh’s Brendan Dolan. Dolan was a rejuvenated figure, adopting a much quicker style than we have become accustomed to over the last number of years. The faster, more fluent Dolan (above) defeated the Japanese sensation, Edward Foulkes, before taking Price to the last leg with the ‘Iceman’ nailing double tops with his last dart in hand to break Dolan’s heart.

As it turned out, nobody got closer to beating the much-maligned Welshman who captured his first ever World Championship on January 3 with a 7-3 victory over former two-time back-to-back winner Gary Anderson in the decider. Both Price and Anderson took full advantage of top seeds Michael Van Gerwen and the aforementioned Peter Wright departing early following shock defeats to Joe Cullen and Gabriel Clemens.

All in all, it was a truly magnificent tournament that provided the usual bucketloads of drama and pulsating encounters throughout the course of the tournament. Whether you like him or not, there is no disputing that Gerwyn Price was the deserving winner of the Sid Waddell Trophy and the new World Number 1 going into 2021.