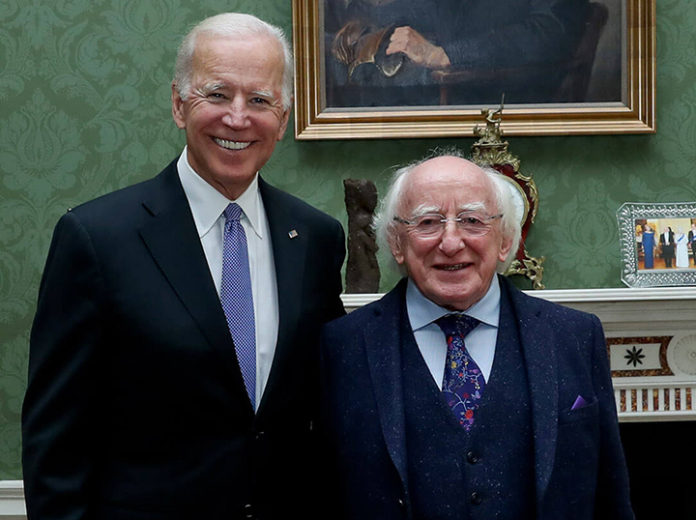 The soon to be inaugurated president has long celebrated his Irish roots, which can be traced back to Louth, Mayo and Meath, and has been closely associated with the Irish- American lobby.

It is expected that his presidency will bring pressure on the arrangements surrounding Ireland’s place in Brexit implementation and focus attention on the importance of the Peace Process. He took the opportunity to engage in state visits to Ireland while in the Obama administration (above) and was famously pictured with a hurley presented to him as a gift by then Taoiseach Enda Kenny.

“Today, I have conveyed my best wishes to President-elect Joe Biden, congratulating him and wishing him and the American people every good fortune for his term in office, and congratulating Vice President-elect Kamala Harris on her historic achievement,” President Higgins said. “Sabina and I, and the staff at Áras an Uachtaráin, have the warmest memories of Joe Biden’s two visits to us. The bonds between the peoples of Ireland and the United States are close and strong, and I look forward to our two countries working together to rebuild the much-needed trust in the methods and institutions of national and international solidarity and cooperation.

“That solidarity is indispensable, if we are to address the urgent challenges of our time, including such diverse issues as the need to address the cause and consequences of the Covid-19 pandemic, climate change, global poverty, hunger, migration and the digitisation of our economies, all issues on which the President-elect has expressed a commitment.

Joe Biden has formed a bond with his ‘cousins’ in Mayo, who have even visited the White House while he was serving a Barack Obama’s vice president. The Blewitt family of County Mayo are related to Biden through a common ancestor—his great, great, great grandfather Edward Blewitt, who travelled to America during the time of the Great Hunger. His ‘cousin’ Laurita Blewitt is a familiar voice to many through the Tommy and Hector Podcast, which she records with comedian Tommy Tiernan and presenter Hector Ó hEochagáin, in which she regularly discusses her family relationship with Biden and has told stories of her visit to the White House.