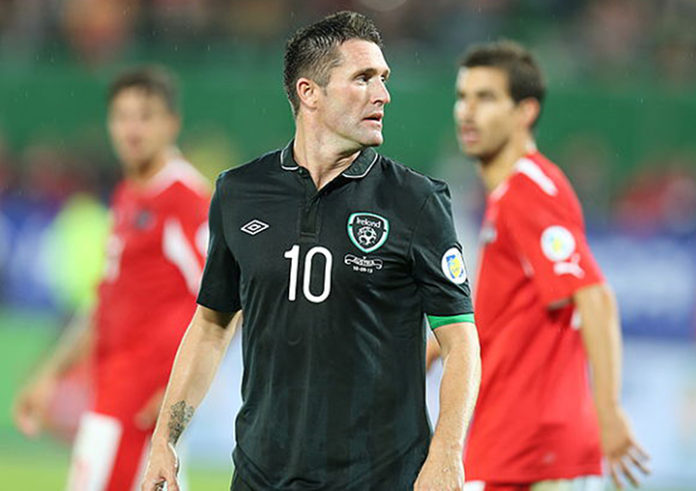 IRELAND fans—usually so renowned for fervent passion in their support and vocal devotion to the team—took to social media and spat venom at the new gaffer and his approach to the last few games.

Not all Ireland supporters were as active in the art of waging war behind the safety of a keypad, however. Some took it for what it was—a settling in period for in the infant days of ‘Kenny Ball.’

From a personal perspective, despite the somewhat doom and gloom undertones of the previous paragraphs, I’m siding with ‘the glass is half full’ option. Albeit in glimpses, Kenny is showing early signs of intent for how he wants his team to play in the future. Surely, there’s no harm in using this time to experiment before the World Cup qualifying starts next year.

Taking over the job two-thirds of the way through a campaign was always going to be a tall order. He certainly wasn’t helped by a growing list of injuries—which the congested season is throwing up to no end for everyone—and the bewildering Covid-19 issue that ruled Aaron Connolly out of the crunch game against Slovakia in October. Bar a late header by Shane Duffy away to Bulgaria in a 1-1 draw back in September, Ireland have consistently fired blanks in front of goal in no less than seven of their matches since. Choosing a ‘Goal of the Year’ for 2020 should be fairly handy. While doing punditry for ITV on the night of the Wembley meeting, Roy Keane couldn’t resist a pop. Bluntly stating that ‘you’re not gonna do much when yer centre-half is your best attacker.’ Although he’d never own up to it, Keano might love a bit of the limelight with his comments about players, but he had a real point with this one, to be fair.

The golden era
One can’t help but feel that there are more deep-rooted issues afoot though. We all know that John Delaney’s shambolic behaviour has essentially bankrupted the association. Our inability to qualify for major tournaments has made the lure of the ‘granny rule’ seem less appealing to non-Irish born players and, here at home, we’re not producing the talent that we used to. Cast your mind back to Italia 90. The bulk of that squad was filled with players playing their club football at the likes of Liverpool, Everton, Arsenal, Manchester United and Celtic. Arguably the top five clubs in Britain at the time.

Fast forward to USA 94. Man Utd were establishing themselves as the dominant force in the new Premier League era and that served Ireland well—the Cork duo of Denis Irwin and the aforementioned Roy Keane being central figures to those successes. Aston Villa were the main contenders to Alex Ferguson and Man Utd’s dash for the league title the season before the World Cup. And shortly before the main event got underway during that summer in the US, the Villains halted United’s charge for a domestic treble by beating them in the Coca-Cola Cup Final. In doing so, they had a notable sprinkling of Irish internationals through the likes of Paul McGrath, Andy Townsend and Ray Houghton all being standouts. Blend all that with the embedded experience of Packie Bonner, John Aldridge, Steve Staunton, and John Sheridan as well as the new kids on the block of that time (Gary Kelly, Phil Babb and Jason McAteer), it’s little wonder why we were ranked sixth in the world around this time.

Moving on to 2002. Although the tag-line that ‘Keane got that team to the World Cup on his own’ may bear some truth, it does carry a degree of hyperbole. In the away game to Cyprus, he papered over the cracks of the team with two goals of his own and an exemplary all-round performance. “But we’re two-nil up, Roy” exclaimed Gary Breen to an irate captain as the two sides headed for the dressing room at half-time. “That’s not the bleeping point!” was the retort. A discussion that is so clearly visible in the footage of that game, that training in lip-reading isn’t the slightest bit necessary. The Corkman carried that steely resolve through to the sell-out showpiece matches against Portugal and the Netherlands during that campaign. His performances in those have gone down in that of legendary folklore on a par with the mythological tales of Cú Chulainn slaying the Hounds.

And yet, while he might have had grievances about the setup when the team arrived at the Hyatt Regency Hotel on the tropical island of Saipan, his ‘one man team’ reputation was perhaps a little undeserving. Ireland had a considerable number of Premier League captains within that particular group.

Mick McCarthy had moulded a side, overtime, that played football on the deck and used wingers to much greater effect. Progressing with times after the era of Jack Charlton had vanquished. The likes of Shay Given, Robbie Keane and Damien Duff were star quality that have never really been replaced. The latter two having tasted early success and highs with underage teams managed by Brian Kerr, some of them going on to become revered legends at their respective clubs not long after. Steve Finnan was a consistently strong performer, Gary Breen and Kevin Kilbane played way above their stature in that tournament and the likes of Mark Kinsella, Matt Holland and Gary Kelly had maturity beyond their years. Back then, our top players relied heavily on plying their trade with the clubs of note in the Premier League, but it doesn’t work that way anymore.

That tournament in 2002 was one that got away from us. With Argentina, France and Italy all bowing out early and the likes of Senegal, Turkey, USA and South Korea reaching the latter stages, who’s to say what might have been if we’d beaten Spain on penalties. I guess we’ll never know, but what we do know is that despite the divide brought about The Saipan Affair, the support for the team was unyielding and remained strong. It still does, but it’s taking a different turn.

Social media and a Scottish example
We used to chant ‘Ooh Aah Paul McGrath’ from the terraces and bellow out how ‘we all dream of a team of Gary Breens,’ but social media has thwarted that. In the last month alone, Jeff Hendrick has been publicly slated online for having the occasional off-game for Newcastle and Shane Duffy has sadly become the victim of pelters from his own fans at Celtic. We moaned to the high heavens that Brian Kerr and Steve Staunton was a daft choice as manager—not helped by the likes of broadcaster Joe Duffy an awful slaying of the late Sir Bobby Robson for having the sheer audacity for not having Stan on speed dial (Heaven Forbid!)—and that Giovanni Trapattoni and Martin O’Neill were ‘spoofers.’ God knows how many rants Eamon Dunphy went on. The return of McCarthy to the helm had us questioning his lack of creativity and now that Kenny looks as though he wants to get them playing ball, he’s in the fans’ firing line.

Looking at Scotland having qualified, I couldn’t help but feel a tad envious. Andy Robertson of Liverpool as their captain, Kieran Tierney now a regular at Arsenal, Scott McTominay at Man Utd and numerous players who’ve picked up a wealth of experience playing pressure games for Celtic and Rangers. More than that though, Steve Clarke had gone through a turbulent start as their manager and now he’s pride of the nation.

The pundits on the night were Darren Fletcher and James McFadden and they were filled to the brim of positive energy. Their delight was of course understandable and while it’s easy to sing when you’re winning, but they were also looking to the future. Praising the possibility that this could ignite the passions of young Scots to create future success stories.

Maybe the former Everton man was jumping the gun, but to their immense credit, the Scottish Football Association has tightened up in how it operates and with major tournaments opening their doors to bigger numbers, who’s to stop them?

It’s so wrong to point the finger at Stephen Kenny for all our woes when there’s an entirely new infrastructure needed behind the scenes. As fans, we might be onlookers, but surely this new trend of publicly slating our own players has to get chucked with immediate effect. If one of our lads misplaces a pass or fails to find the net—again—let it sit. We were maybe never as good as we made ourselves out to be during the better days—that’s debatable—but we’re certainly not always as bad as we make things out to be either. Harvests get scourged but they can also be sown again.