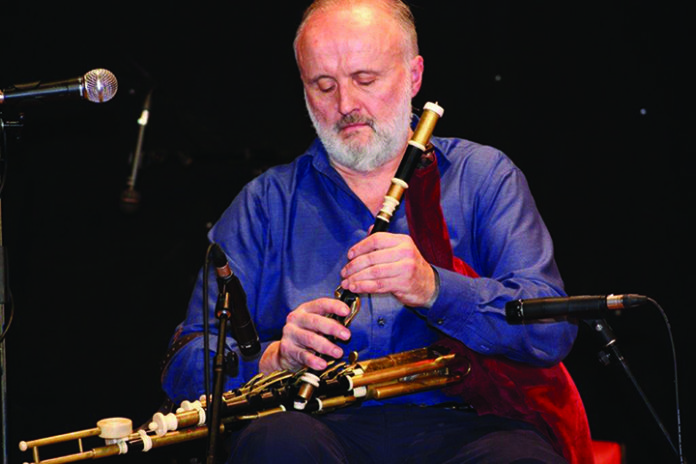 THE now traditional celebration of Irish music and song took place again in January as the 21st Jimmy McHugh Memorial Concert was held in Glasgow.

The concert began with a lovely tribute from Jimmy’s wife, Ann, about the respect everyone has shown for Jimmy in the 21 years, since his passing

Elise Gannon, before Eamon McGivney from Longford on fiddle was accompanied by the rousing piano playing of Mary Corcoran from Dublin.

Fittingly for a concert in memory of a man with such an encyclopaedic knowledge of different musical styles Eamon played some unusual tunes, with slow airs, slip jigs, barn dances combining with reels and jigs.

The audience was treated a futher exhibition of traditional piano music as Mary remained on stage during the magnificent piping of Kevin Rowsome, (above) who demonstrated why the Rowsome piping dynasty is so revered in Irish music.

Also taking the stage was Deirdre Collis, again accompanied by Mary Corcoran, who began by telling the audience that it was 30 years since she was last in Glasgow, coming over for a concert organised by Jimmy.

The first half concluded with the ever-exuberant Cathal McConnell telling stories, great singing of songs from around Fermanagh, terrifically embellished tunes on the whistle and lovely easy-going tunes on the flute.

After a brief interval, the second half resumed with an amazing song from one of Jimmy’s friends, the Tipperary singer Deirdre Scanlan, about four young men executed by the RIC on Killaloe Bridge.

The second half proceeded as the first with guests coming after each other and before Deirdre Collis brought the concert to an end Cathal gave a rousing rendering of Only Our Rivers Run Free, written by his brother Micky McConnell.

After Deirdre Collis finished all the guests came on for a lively finale playing some great Sligo Reels, concluding an unbelievable night of the finest in Irish traditional music, song and dance in memory of Jimmy McHugh.

With plans already underway for next year’s January fest of music Jimmy McHugh’s legacy is more secure than ever.