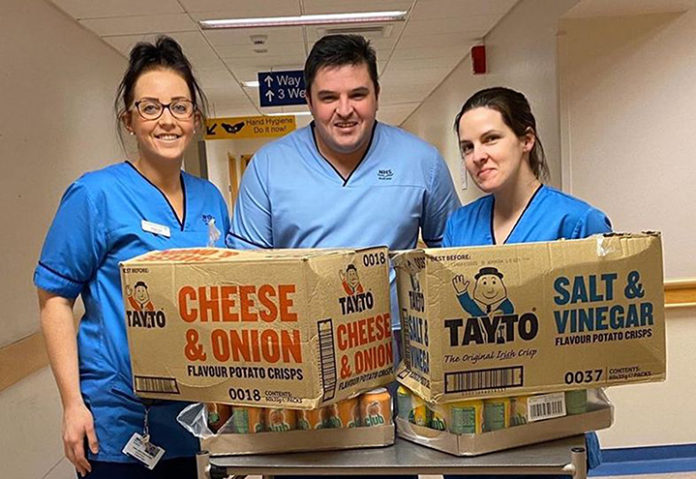 With a pub scene to be proud of, the Irish community in Scotland have felt the loss of these social hubs during the coronavirus pandemic more keenly than most, but there is much more to these community focal points than just nipping in for a pint. A prominent member of Causeway: Ireland Scotland Business Exchange, Simon Keane of Malones is a well known face not just to his patrons but to those in the business community in Scotland. He spoke with Causeway to share his story about how he has seen lockdown affect the social life of the community, how his business has reacted to the crisis and his plans for the future as lockdown restrictions begin to ease.

SINCE it was established, Malones has always been a strong supporter of Irish communities in Scotland, from employing Irish staff, to sponsoring Gaelic teams, supporting Irish musicians and gigs, and by being a strong supporter and friend to Irish professionals working and living in Scotland through the Causeway network.

Originally from Dungarvan, Waterford, Simon Keane’s family first established Malones in Aberdeen in 2009, which later led to the original Edinburgh venue being established on Forrest Road in 2010. As the Irish bars’ success grew, Malones expanded further to Glasgow’s Sauchiehall Lane in 2014, and in 2016 the Edinburgh venue on Forrest Road was sold, which made way for Malones on the Mall—a pop-up bar intended only to show Six Nations whilst the hunt for a new suitable venue in the city was underway. This pop-up operated for about eight months and is where Festival Village was born. In January 2018, the current Malones on Morrison Street opened, and has been home to many memorable and valuable Causeway monthly social networking gatherings for Irish-Scottish business professionals to connect and chat.

Commenting on what makes Malones stand out from other Irish bars, Simon spoke the authenticity.

“We pride ourselves on being authentically Irish,” he said. “We try to get involved with any and every Irish community across the country. From hosting the Scottish Rose of Tralee in Aberdeen, to being active members of the Causeway community and sponsoring the GAA championship in Scotland.”

As the Covid-19 crisis began to peak in the UK, on 17 March – St Patrick’s Day – Malones made the difficult decision that they would close their doors that night.

Looking back, Simon reflects, “It was a particularly tough decision for many in hospitality, especially seeing as the Government at that stage had advised people to avoid bars and pubs, but had not officially ordered any venues to close. We felt however, that it would be irresponsible for the safety of both our staff and customers, to stay open at that point and announced the closure on St Patrick’s Day.”

Home comforts to frontline workers
By April, with the country officially in lockdown and all the Malones bars shut, and in awareness of the high number of Irish immigrants working in NHS hospitals in Edinburgh and Glasgow, Malones made the remarkable and kind gesture of using up stock sat in their bars to deliver some ‘home comforts’ to the frontline workers (above).

Explaining more, Simon expounded: “With the bars closed, we decided to take all the Irish products we had onsite in Edinburgh and Glasgow—from Tayto crisps, to Club Orange and Barry’s Tea—and we did a few drop-offs to local hospitals and those at the frontline.

“We had an amazing response—it was unreal. Unfortunately, we had very limited supply of these, so we weren’t able to do as much as we had hoped, but we were delighted to be able to put a smile on a few people’s faces with this small gesture. Home comforts can go a long way at the best of times, you can’t beat a Tayto sandwich and a cup of tea!”

Social media
While the doors of their bars remain closed, social media has been a crucial platform for Malones to continue to engage with their loyal customers, and since lockdown through their various social media channels, as well as receiving support from existing customers and followers, they have even managed to attract new audiences globally, through posting humorous posts, and hosting a wide range of live music streaming sessions.

Explaining more about their social media engagement strategy and its importance for growing customer engagement, Simon said: “I think it’s particularly important during this crisis to keep up regular contact and engagement with our customers. We have an extremely loyal following which we are so grateful for, now more than ever.

“Many businesses, for completely understandable reasons, have kept pretty quiet through all of this, but that’s not really our style—we want everyone to know we are still here, missing them and will come back stronger than ever!

“We have continued to post regularly on social media, with our usual tongue-in-cheek type posts, to try to keep peoples spirits up and stay away from the topic in question! From games and riddles, this has hopefully kept people entertained.

“We have also been hosting some extremely popular live music streaming sessions every Friday, Saturday and Sunday—people seem to really love this. Some people have been watching the live sessions from all over the world—some of the messages the musicians have received are really heart-warming. It’s a pleasure to be able to provide some comfort through such a time of uncertainty!”

Recovery plans
As lockdown starts to ease, Simon and the Malones team are eagerly waiting for further instruction from the government on when they can expect to reopen their bars. In the meantime, their sister pub, Cask Smugglers, has recently launched a new cocktail delivery service, delivering free across Edinburgh pre-made classic cocktails, complete with garnishes, guides, and optional kit, for customers to shake their own cocktails at home.

Looking forward on plans for reopening, Simon said: “Once we’re able to reopen, we are hoping to host a massive party for frontline workers and we cannot wait to get back to seeing all our regulars and staff. It is difficult to know at this point when that will be exactly but keep an eye out, because there’ll be some great celebrations to be had!”