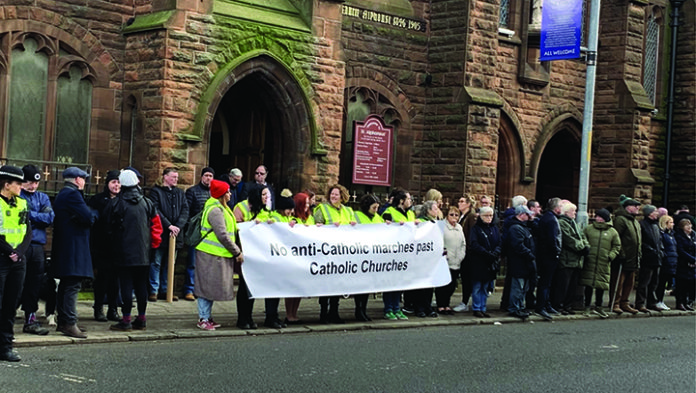 THE Irish community was among those who gathered outside St Alphonsus Church in protest as a local Orange march was routed past the church just months after parish priest Canon Tom White was assaulted during a previous parade.

The sickening assault provoked widespread revulsion throughout Glasgow, and culminated in the arrest of Bradley Wallace after DNA analysis of vestments revealed that he had spat on Canon White. He is currently awaiting sentencing.

However, despite such serious concerns about the safety and security of local Catholics, an Orange march was approved to take place this month in the face of widespread criticism. Earlier marches on this route in the weeks following the assault were either rerouted or cancelled.

Protest
Since last year Call It Out: The Campaign Against Anti-Catholic Bigotry and Anti-Irish Racism has been active in campaigning on a number of fronts —including the presence of anti-Catholic marches outside Catholic churches—and staged its second and so far biggest protest against such a parade.

At the end of 2018 an all-women protest was present outside St Michael’s in Parkhead as a march passed, but following the approval of the latest Orange parade past a Catholic church a more extensive protest was planned in order to oppose it.

Representatives from a variety of groups seeking to show solidarity with Call It Out were in attendance as support for the aims of the campaign continued to grow.

In addition to female members of the campaign displaying a banner reading ‘No anti-Catholic marches past Catholic churches’ on the steps of St Alphonsus, silent and static protesters lined the street outside the church as the parade passed not once, but twice.

With a vastly inflated entourage, no doubt motivated by the opportunity to parade a contentious route and in a show of defiance against the protest, protesters were subjected to abuse—much of it bigoted and racist in nature—and intimidation during the parade.

However, despite the testing circumstances and the precedent set by last summer’s assault, protesters remained silent throughout, and stood calmly along the road outside St Alphonsus while the parade and hundreds of followers streamed past them.

The timing of the parade also meant that parishioners arriving in St Alphonsus for the Angelus and rosary were forced to pick their way through marchers, police officers and protesters as they attempted to enter the church.

Peaceful
Calling for support ahead of the protest, Call It Out reinforced the peaceful aims of their campaign.

“There is an anti-Catholic march going past St Alphonsus Church tomorrow morning,” they had said. “CIO have organised a static counter-demonstration in line with our stated policy to oppose such marches passing Catholic Churches. We want this protest to be silent and peaceful.”

In a disciplined and well-organised protest, Call It Out and their supporters presented a dignified opposition to the parade—and highlighted the strength of feeling against the acceptance of such anti-Catholic displays at the doors of Catholic churches by authorities.

“This protest was an important step in our campaign against anti-Catholic marches past Catholic churches,” organisers said. “Call It Out has committed to opposing all such anti-Catholic marches following these contentious routes, and we would like to thank all those who participated on the day.

“The conduct of protesters in the face of abuse and provocation was exemplary, and demonstrates that we are building a peaceful and respectful campaign with one reasonable aim, which could be easily achieved with goodwill from both the authorities and those parading—the aim of ending the presence of anti-Catholic marches outside Catholic churches.

“Given the strength of feeling from within the community we are confident that we will continue to stage and even expand these protests should our calls be ignored, and resolve once again to ensure that anti-Catholic marches do not pass Catholic churches unopposed.

“The support we have received from many different sections of society—such as from the trade union movement—is a clear indication of the solidarity with our aim from the wider public.

“We do not wish to challenge the rights of anyone to parade, but we will no longer stand by and allow anti-Catholic marchers to impose their bigotry on the Catholic community.”

With a heavy police presence and the promise of further protests should anti-Catholic marches past Catholic churches continue to be facilitated by authorities, questions will be asked about the pressure put on the public purse by such police operations.

The campaign is only focused on parade routes that include Catholic churches, meaning that by a simple rerouting of proposed marches, or a refusal of permission being given for marches on a limited number of routes such protests by Call It Out will cease.

As the much more intensive summer marching season approaches more scrutiny is certain to follow given the resolve of campaigners to ensure this issue is tackled effectively.