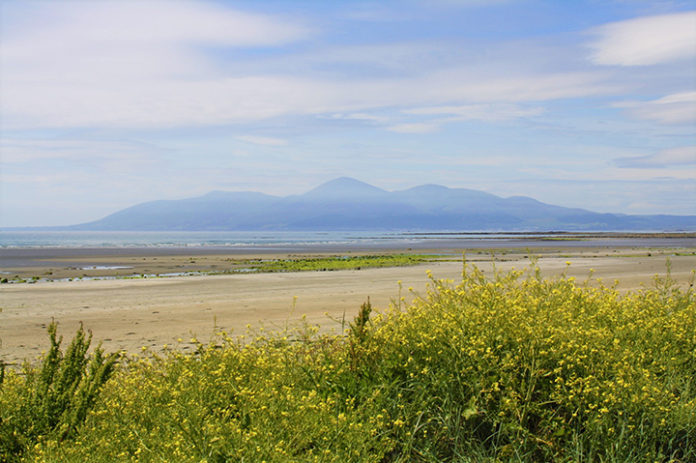 WE MADE for the Pride of the County Down, after my wife had spotted a great value three-day deal at Newcastle, County Down’s, swish Slieve Donard Hotel. So, it was on with the bikes to the Stena boat at Cairnryan for Belfast. Then it was train to Bangor—to miss the worst of the traffic around Belfast—followed by the legendary six miles from Bangor to Donaghadee, as a certain well-known song says, before cycling down to Portaferry.

Easy riding took us down the Ards Peninsula, looking across the North Channel to the Galloway coast, while the Isle of Man floated, mid-sea. We passed the village of Millisle, where, let’s just say, that you wouldn’t stop in to ask the time of Sunday Mass, for the kerbstones, and the entire road surface, is slathered in red, white and blue. Our pace quickened.

Sea views to the left, and County Down drumlins on the right, took us down to Portavogie, and you could tell what the political lay of the land was, for, as we went south, the village welcome signs had changed to Irish. We were beginning to feel at home!

We spent our first night in Portaferry, a pretty town at the entrance to Strangford Lough, its name a reminder that the Vikings once ruled these parts, with the comfortable Portaferry Hotel’s excellent Ulster fry breakfast, powering us on to the ferry which hops across to the village of Strangford itself.

From there, we took the Lecale peninsula coast road, to the pretty fishing village of Ardglass, whose harbour was doing good business for the scallop dredgers, and, from there, it was down to Tyrella beach, with its miles of golden sand.

There, with the outline of the Mountains of Mourne beckoning in the distance, we stopped for a picnic lunch, having bought baps in Killough, and, washed down with Club Orange— has a better soft drink ever made in Ireland?—we took our ease on the sand in glorious sunshine.

On, then, towards Clough and down to Dundrum by the sea. It was a perfect day, the hills were kind, there was no wind, the sun shone and the bikes were running well.

But then, we hit a patch of surface dressing where the chippings hadn’t been rolled in. It’s the sort of surface that’s death for bike tyres, and, yes, my rear one punctured. So, off with the paniers, turn the bike upside down and out with the spare tube I carry for such events.

No problem with fitting the tube and re-inflating, but given the tar from the road works and the dust from the chippings, not forgetting the oil from the bike, I was somewhat less sparkling clean than normal by the time I got back on the road to the hotel.

And a grand place it is. Built by the Belfast and County Down Railway, which promoted Newcastle as a resort, and, where, in the words of the famous Percy French song, the Mountains of Mourne really do sweep down to the sea, the hotel is popular with the well-to-do.

We cycled past BMWs and Mercs a plenty, with both Belfast and Dublin plates, parked outside, ourselves in shorts and cycling gear, me oil and dust-streaked, thanks to our unplanned puncture pitstop, up to the grand entrance.

In we went, wheeling the bikes to reception, to be met by the maitre himself. Clearly more used to luxury car drivers and passengers, he didn’t bat an eyelid at the sight of two less-formally dressed guests, one looking as if he needed an immediate shower, but welcomed us in a dignified manner, and asked a member of staff to wheel our bikes into storage for us, as we booked in. This was service!

The hotel was superb, and we made the most of our dinner, B&B deal, enjoying the fine food and the facilities, including the swimming pool, sauna and steam room. We also read the story of the hotel and the railway that brought it to Newcastle thanks to a small museum section in which the most interesting item was a genuine B&CDR Slieve Donard Hotel chamber pot of the late 19th century! Everything’s en suite, these days!

Newcastle boasts a fine strand, and is great centre for walking or cycling the Mournes, so, off we went, up the challenging cycle climb up to the Spelga Dam. It’s the sort of hill you wonder why you’re trying to climb it on a bike, grinding away in the lowest gear as you go slowly upwards.

But, once at the top, the views are superb, and, on the way down, my wife, Patricia, didn’t brake, until her bike computer showed that she was hitting 43mph! And the views over Newcastle were superb, if you dared lift your eyes from the road to look at them!

County Down (above) is worth a visit. We enjoyed the cycling, and, after our Newcastle stay, pedalled back via Downpatrick and Newtonards. But that’s another story for another day.

As I write this, in my mind’s eye, I’m lying on Tyrella Beach, enjoying the view and drinking my Club Orange. And I don’t know that there’s a puncture waiting just around the corner…. Happy days.