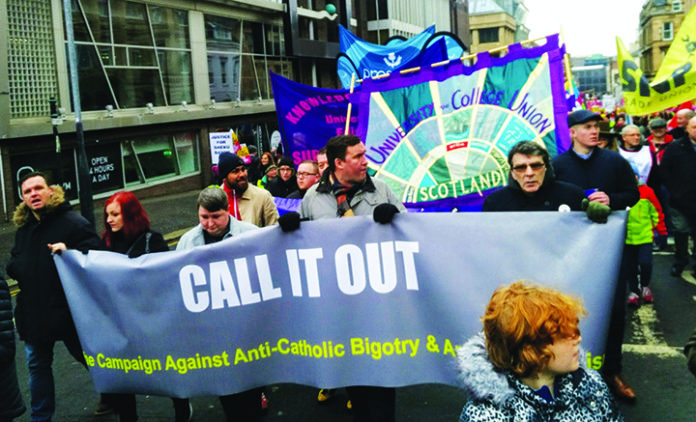 CALL It Out: The Campaign Against Anti-Catholic Bigotry and Anti-Irish Racism is calling for support for a rally in Glasgow in August as it continues its efforts to oppose hatred and discrimination.

The call comes as the Scottish Catholic Observer published the first major research into Orange walk numbers in over a decade, with a decline over recent years shown. The last major review was led by Sir John Orr in 2005, and last year’s total figure of 747—down from 834 in 2017— shows a slight decrease from the 853 such marches recorded in 2003.

However, the fact that contentious marches continue to see Orange parades routed past Catholic places of of worship has led to many within the Irish and Catholic communities calling for a more managed decline of Orange parades, rather than society simply observing the effects of attrition on the declining movement.

Editor of the Scottish Catholic Observer, Danny Harkins spoke to The Irish Voice about the motivation for gaining a clear picture of the numbers of Orange parades each year and the need for Scottish society to call time on their parades past Catholic churches.

“A lot has been written in the last year about the decline of the Orange Order,” Mr Harkins said. “National newspapers have devoted front pages to the claim based on nothing but the thoughts of a handful of academics.

“At the Scottish Catholic Observer, we are acutely aware of the damage Orange walks cause in Scotland: the violence and abuse and intimidation of the Catholic religious minority.

“Now, thanks to our request to all 32 councils in Scotland, we can see a true picture of these historically anti-Catholic marches.

“The number of marches is still far too high. There is no need for any organisation to hold 700-800 marches a year, and indeed, no other organisation in Scotland comes close to such a number. Any group marching through the streets in those numbers is not celebrating their identity: they are seeking to intimidate others.

“With that said, the figures do show a decline from 2003, and year on year from 2017. This is positive sign, and one all right-thinking people in Scotland must capitalise on. Now is the time for civic society to say ‘no more’ to this visible legacy of Scotland’s anti-Catholic past. Now is the time to insist that anti-Catholic parades should not pass Catholic churches.”

Rally
The effort to wake up authorities in Scotland and force them to both apply the law and protect rights equally will now continue with a rally set for George Square on August 24. Already Call It Out has gathered a range of speakers from across the political spectrum and will use their support to demonstrate the growing consensus that the public authorities in Scotland must move now to tackle an issue which has been left alone for far too long.

“The shocking but all too familiar scenes across Glasgow on July 6 this year as the Loyal Orders carried out their ‘Boyne Celebrations’ or ‘Big Walk’ as it is more commonly known, follow a pattern which is decades long and to which the whole of civic society has turned a blind eye,” a Call It Out spokesperson told The Irish Voice. “Following the inception of our campaign at this time last year, these scenes are now being made widely available to all citizens, many of whom do not come from our community or from the areas where most of the criminality takes place on these occasions. What is sadly familiar to us is now becoming evident to our fellow citizens and they are undoubtedly horrified by it.

“It is abundantly clear that there were numerous breaches of the conditions set by Glasgow City Council and Police Scotland on the day and that, in addition, the police chose (probably for good reason in the circumstances) to routinely ignore all manner of petty criminality. Assurances given to Catholic clergy by representatives of the Orange Order were also breached as bands continued to play their ‘traditional’ tunes (while their followers supplied the words) passing Blessed John Duns Scotus on Ballater Street.

“The Very Reverend Thomas Canon White was then moved to issue a statement condemning the conduct of the marchers and this was supported by the Archdiocese of Glasgow and shared by the Diocese and Bishop of Paisley.”

Campaign call
It is this behaviour, Call It Out say, which has led to the introduction of a new element of their campaign, which will be launched with the rally on August 24 in George Square.

“On that basis we are now launching a new strand of the campaign to strongly advocate that the city is no longer taken over between 8am and 4pm on the nearest Saturday to the 12th of July on an annual basis and given over to anti-Catholic bigotry, assault, drunkenness and petty criminality,” their spokesperson said. “In short, we wish the anti-Catholic Loyal Orders to have the law applied to them as it is to every other organisation that wishes to march.

“Yet again, we emphasise that we do not want to prevent these organisations, vile though they are, from exercising their civil rights. However, these ‘celebrations’ could be held in a single venue, such as Glasgow Green. This would allow them to ‘celebrate’ and the rest of us, including shops and businesses, to go about our normal business on that day.

“We believe there would be widespread support for a policy of this kind and we also believe that this would be a reasonable and proportionate decision for Glasgow City Council to take in pursuit of a lawful aim.

“To that end we propose to hold a short rally in George Square on the morning of August 24 to launch and publicise this campaign. We have invited speakers from the main political parties, from the STUC and from the main religious groups.

“For too long this ‘celebration’ which is actually more of a hatefest and a significant public order issue, has been treated as the norm in many cities and towns across Scotland. If we can make a change in Glasgow, the venue for the largest of these events, then we might be able to establish the principle that local authorities must apply the law without fear or favour, including to those people whose hatred of the Catholic/Irish Catholic community has blighted Scotland for so long.”