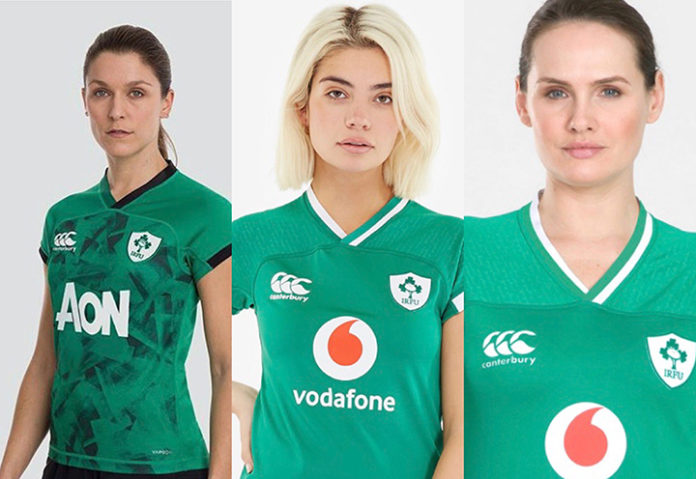 IRISH Rugby’s official kit sponsor, Canterbury of New Zealand, has come under fire for their marketing of the women’s pro jersey.

The striking differences were noticed at the kit launch when models were used to market the female jersey (above), while Ireland rugby stars Bundee Aki, Robbie Henshaw and Connor Murray were chosen for the men’s jersey launch.

The men were sporting a full kit looking ready to line out for a match, compared to the women in trousers consigned to the position of a spectator. This is hardly surprising given the fact the Ireland women’s team are not paid and it reflects sexist attitudes still held in the sport.

It does not however, paint an accurate picture of women who play Rugby Union. Women’s Rugby is expanding at a rapid pace at grassroots level globally where the men’s game is struggling.

Many people have taken to social media to express their disconcert at the advertisement using the hashtag #IAmEnough.

This included a tweet from Wasps player Florence Williams who shared a photo of the models and rugby players which read: ‘Spot the difference. 2 jersey launches. 3 models. 3 international players. 3 profiles lifted. 1 huge opportunity missed. By not using the female players to market their own kit an opportunity to build recognition, fan bases and creating role models for future generations is lost’.

Apology
Canterbury initially excused their mistake claiming they had to use models because of jersey delays caused by Covid-19: “Due to COVID-19 our women’s jersey samples were halted in production, pushing back our women’s shoot.

“Keep an eye out in the coming weeks for the official women’s jersey launch. We were too excited not to show you this preview on launch day”.

They later issued an apology and a pledge to launch a new campaign championing female players: “While the image was primarily designed for our website, which also features male models, it has understandably caused frustration. We accept this was an error and apologise for any upset caused.

“At Canterbury we believe that rugby is for everyone and we’re united by our mutual love of the game.

“We look forward to sharing our ‘A New Horizon’ campaign to support the launch of our Ireland Women’s Pro jersey in October, with the same commitment and dedication that we have for all our team”.

Despite Canterbury’s best efforts to fix this PR disaster it is too little too late once again for women playing the game.

Changing culture
Meanwhile Adidas and Munster have suddenly showcased and promoted female rugby players. It is difficult to know which companies are genuinely sincere and committed to equality in sport which runs deeper than jumping on the bandwagon of superficial marketing campaigns.

The lack of representation is not unique to Ireland Rugby Football Union and the 20×20 Can’t See Me Can’t Be Me campaign has been set up to address this issue in Ireland.

The campaign strives to ‘create a cultural shift in our perception of girls and women in sport. There is so much to celebrate when it comes to women’s sport in Ireland, but there isn’t enough noise. We’re making some noise because if she can’t see it, she can’t be it.’

Female players cannot see themselves in Canterbury’s advertising campaign, but given the social media backlash, it is evident they can certainly be it.

The fiasco coincides with Brazil’s announcement for equal pay for women’s football matches. England FA could not allow this moment to pass without their own public relations stunt and followed suit with an announcement that they had started paying females the same match fees and bonuses as their male counterparts since January.

Women can only act grateful for receiving the bare minimum in sport for so long and now they are demanding respect on and off the pitch.