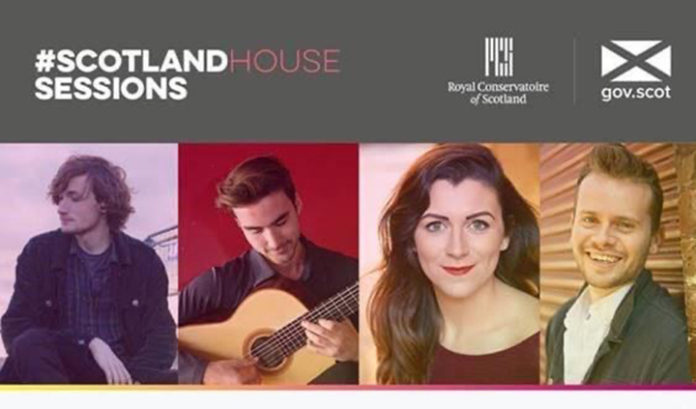 THE Scottish Government’s International Network of offices has been seeking to raise the spirits and to connect with their friends across the world by launching a series of virtual concerts the #ScotlandSessions.

While the Covid-19 pandemic has obviously halted any ability to network with friends of Scotland in person—until restrictions are eased—they are keen to engage digitally.

Led by Scotland House, London, the first three sessions are in partnership with the Royal Conservatoire Scotland. Students and artists from RCS have worked closely with the Scottish Government external offices on many occasions, providing outstanding entertainment and unique performances.

It is no secret that arts and culture is extremely important to mental wellbeing and has the ability to connect people at a time when they might feel very disconnected or isolated. It is also vitally important to support artists and performers during this uncertain time.

The range of musicians performing in this initial series of three concerts highlights the inextricable links between people, culture and countries. The first performance took place on Wednesday June 3 and featured one of Scotland’s most exciting young talents; jazz and trad pianist, Fergus McCreadie. As well as winning the prestigious Peter Whittingham Jazz Award with his trio in 2016, he has twice won the Young Scottish Jazz Musician of the year under-17s Prize and is the winner of the Guy Jones Prize, the Joe Temperley Prize from the Royal Conservatoire of Scotland, and the Linda Trahan Memorial Prize from St Andrews University. McCreadie’s music is an innovative blend of jazz and Scottish traditional music.

The second performance on June 17 will be from Glasgow-born, mezzo-soprano, Fiona Joice, and tenor, Liam Bonthrone. Fiona and Liam will perform an eclectic mix of Scots, light classical and comedy songs.

The third and final performance in this series will be from classical guitarist, Tim Beattie on July 1. Born in Toronto in 1997, Tim Beattie is currently pursuing a Master’s Degree in music performance at the Royal Conservatoire of Scotland, where he is studying on full scholarship under the tutelage of Allan Neave and Matthew McAllister.

All-in-all, it promises to be a varied and entertaining showcase of talent to brighten up your lunchtime.