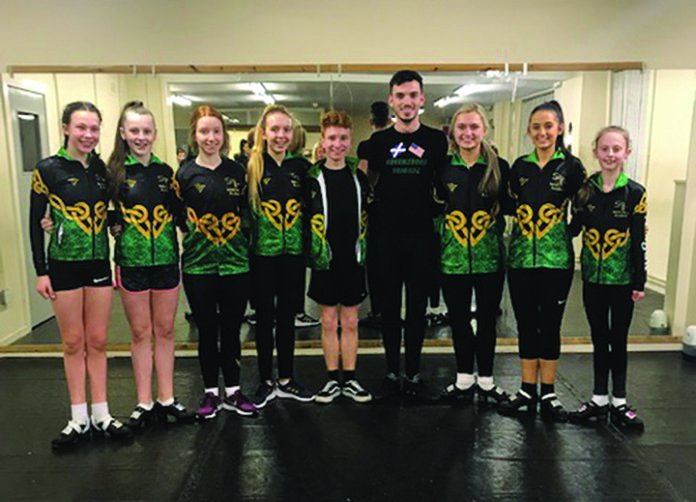 IRISH dancers from Scotland will be among those heading to Greensboro, North Carolina to take on the best dancers in the world for the Irish Dancing World Championships.

Many of those flying the flag for Irish dancers here will be the students of Sharon Taylor (above), with ten dancers from the Sharon Taylor Irish Dance Academy making the long journey to America as they seek to defend their titles and claim new honours.

“Ten dancers from my class heading to Greensboro North Carolina to compete against the best Irish dancers in the world,” Sharon Taylor told The Irish Voice. “Three of our dancers will be defending their much sought after World Globes, which they won last year in the Glasgow Worlds. The dancers are training extremely hard for the forthcoming worlds putting in many hours of practice perfecting their dances.”

The hard training and long hours to dedicated practice are already paying off for her charges, with creditable performances at championships over the last year keeping hopes strong of Irish dancers from Scotland once again lifting honours on this stage.

They have been ably directed in their preparation by Sharon Taylor and her team, which includes Marion Montgomery TCRG, Shannon Doherty TCRG and trainee teachers Amy Jane Campbell and Beth Campbell.

“In the lead-up to this year’s event our dancers have competed in all the major championships including the North American Championships in Florida where Kathleen Collins won the coveted title, Declan McLaughlin placed second and we had several top 10 and top 20 placings,” Sharon Taylor continued. “Declan McLaughlin was crowned British National Champion and Great Britain Champion with Amy Chestnutt placing second and third in both events and Kathleen Collins placing fourth and third respectively, while Patrick McKenna placed third and fourth. We also had many more top ten and top 20 placings in these events.

“The recent All Ireland Championships saw Kathleen take another podium top five placing finishing fourth in an outstanding girls Under 15 championship, with Declan finishing an amazing second place. Our dancers won many prestigious All Ireland medals at this event.”

Championship classes are held at the Sharon Taylor Irish Dance Academy in the Perfect Feet Dance Studio in Bellshill, while beginner classes are also available in Maryhill, Knightswood and Burnside, with new venues being announced soon.