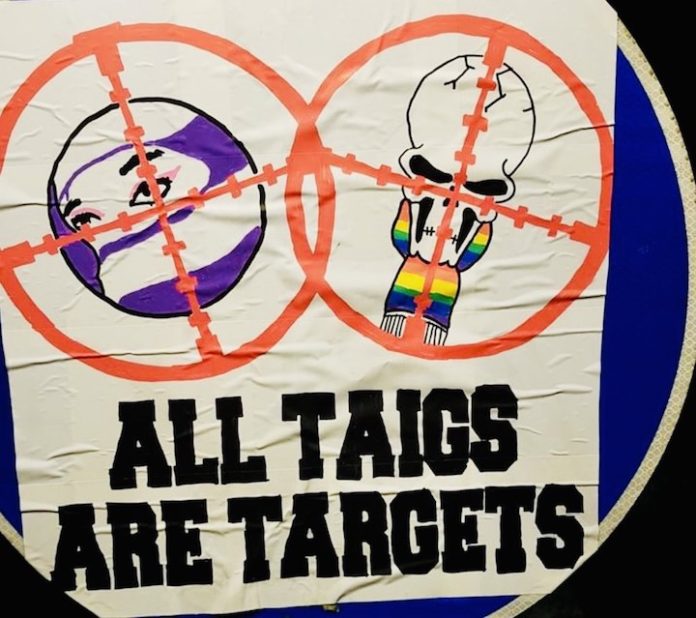 ANTI-Catholic hatred and bigotry and anti-Irish racism are two inextricably linked, if subtly different, issues depending on the time period and context within which they manifest. It is also useful when considering both to have a general understanding of the national and international context of the different time periods as the societies of the time heavily influence some of our contemporary understandings of anti Catholicism and anti-Irish racism.

I find it most beneficial when trying to comprehend our experience in Scotland from An Gorta Mór onwards with a recognition that World War II fundamentally altered the way in which we understand race and ethnic identities. Furthermore there are, to my understanding, five key dates in the Irish experience in Scotland—An Gorta Mor, the arrival 1845-1914; Menace of the Irish Race to the Scottish Nation 1914-1939; the redevelopment of Scotland and Britain post-World War II 1939-1960; the revolution against British imperialism in Ireland (or ‘The Troubles’) 1969-1998 and post-Good Friday Agreement Generation 1998-present day

An Gorta Mor-The Arrival 1845-1914
At this stage, the British Empire is at the zenith of its power. Ireland is a British colony. Eugenics help the empire understand the world they are trying to rule and exploit. In the case of Ireland, their race is characterised as thick, ignorant, uneducated, filthy and ape-like. What encapsulates all of this is their Gaelic language and adherence to the Church of Rome, juxtaposed with against their enlightened, educated Protestant British colonisers. The thick Irish apes with Catholic symbolism are popular in the punch cartoons of their era. An Gorta Mór sees millions starve or flee as, what we would refer to them as today, refugees. The worst off die, the lucky ones go to the New World and the poorest come to Scotland. At this stage there are almost no Catholics in Scotland beyond the Outer Hebrides, parts of the west Highlands and Aberdeenshire. Across Greater Glasgow, Clyde Valley, Edinburgh and Dundee there are, by 1872, 66 self-funded Catholic schools with 12,000 pupils.

1923 Menace of the Irish Race to the Scottish Nation 1914-1939
73 years on from the arrivals of Irish refugees in the hundreds and thousands, the Church of Scotland’s highly influential Church and Nation Committee publish the ‘Menace of the Irish Race to the Scottish Nation.’ The document presents a re-affirmation of the most extreme, eugenics-based assessments of Catholic, Irish people. Their Protestant counterparts, some of whom also left during the Great Hunger, have assimilated into Scottish society. The context here is important, for many Ulster Scots returning to Scotland is a home from home following their plantation of Ulster. A shared religion, language and mistrust of the Irish Catholic fuses two very closely linked identities of the Presbyterian Scots and Ulster Protestants. The menace to Scotland is the Irish Race, characterised by their faith, language, culture and social interests. Catholicism is a fundamental characteristic of the alien ethnic Irish in Scotland. Catholicism at this point is a proxy for Irish, and vice versa.

The redevelopment of Scotland and Britain post-World War II 1939-1960 and the Tunnel Tigers
Following the carnage of World War II, Britain is once again in need of Irish labour to help rebuild and modernise its infrastructure. In Scotland this means the development of hydro-electric dams, water infrastructure, roads, railways and much more. This brings a new influx of economic migrants, particularly from Donegal. Different to their An Gorta Mór refugee ethnic siblings, they are not starving or destitute and going into slums, but competing for jobs, houses and education. Thus begins the ‘What school did you go to?’ employment experience for generations. Catholics congregate in public services, teaching, nursing and construction, where their opportunities are. Media, law, finance, policing and other professions remain closed off.

In addition, in the post-World War II global environment, eugenics is very much out of fashion. There is a significant increase in South Asian and Caribbean economic migration to the UK and our contemporary understanding of racism becomes more prominent. People are targeted due to their colour, nationality and ethnicity. In Scotland this means that what the Irish have experienced due to their ethnicity and its associated characteristics so too do Pakistani, Indian and Afro-Caribbean with the added dimension of being brown or black.

A significant international influence on enduring legacy of British and European colonialism is reaching a crescendo in apartheid South Africa. In response, and following the Sharpville massacre, the international community drafts and adopts the International Convention on the Elimination of All Forms of Racial Discrimination. In full knowledge of the legacy impacts of British/European colonialism, Article 1 protects people from racial discrimination on the grounds of ‘Colour, Nationality, Ethnicity, Ethnic or National origin.’

The Irish are characterised by their faith, their football team, their name, their school. As such the Irish are almost exclusively recognised in official documentation, such as the census, via their religion.

It is not until 2001 that Irish becomes an option in Scotland’s official census form. Thus, name, faith, occupation, sporting allegiance, and cultural interests remain the dominant indicators of a distinct ethnic group.

The revolution against British imperialism in Ireland (or ‘The Troubles’) 1969-1998
Things become much more real and personal for many of us now as this is all living memory. Whether they were involved in the Republican movement or the civil rights campaign or both many of our families experienced the repercussions of this in Scotland as well as Ireland. As for the regular travel between Glasgow and Donegal, most people will have experienced a British Army unit at some point.

In Scotland, special branch interest and intimidation at work from the police was commonplace for the Irish in Scotland, particularly around the time of the hunger strikes. Although the Catholic community is significantly more diverse, including Italians, Lithuanians, Poles and others, they are ‘Fenians’ anyway. There is little room if any manoeuvre for them to escape it. Catholicism and Irish identity remain intertwined and Catholics of other ethnicities are ‘Taigs’ also.

The now multi-generational An Gorta Mór and economic migrant generations are held in suspicion and there is massive state clampdown on Irish political, social and cultural activities. There are no open St Patrick’s Day celebrations in Scotland, cultural and social organisations are the focus of surveillance even when they’re as basic as Irish music classes. The two main places of safety are the Catholic Church and Celtic Park.

Post-Good Friday Agreement Generation 1998-Present day
Post-Good Friday Agreement (my own generation), I sensed in our community In Scotland a re-found confidence to be more confident about our Irish identity in a much more public way. Questions began to be asked about why Glasgow has no St Patrick’s Day Festival or parade? Why no Irish cultural bodies or festivals have received a single pound of funding? And, very relevant to today, why we should we accept being religiously or racially abused in modern Scotland? This has provoked outrage from some people, but it’s really a very simple issue. An educated, politically aware community who are descendants of refugees and migrants now have the time, due to the sacrifices of their ancestors, to ask the hard questions and keep at it.

For example, referring back to the Tunnel Tigers and their building of Scottish infrastructure, not enough people appreciate that it was a ‘Fenian’ who fixed their water supply. That every time they turn a tap on they’ve a ‘Paddy,’ in part, to thank for it. This is only one example.

I think it’s worthwhile examining this, as I’ve seen a good deal of debate as to whether we are discussing anti-Catholicism, anti-Irish racism or both.

This is just a snapshot of feeling about the present situation and why we must resist anyone who tries to undermine this history, personal experience or present it as ‘sectarianism’ or ‘football’ or ‘white on white prejudice’ or to suggest that it is ‘not that serious.’

We’re standing on the shoulders of giants and need to call things out for what they are.